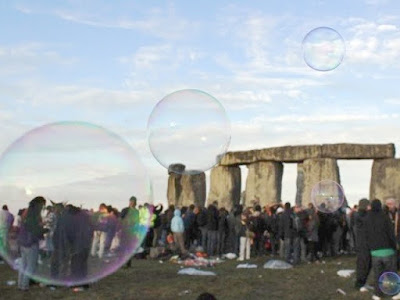 An excuse to drink and get naked.

Thousands wait for dawn at the Heel Stone, a pillar just outside the circle, which aligns with the rising sun.

latimes.com
Thousands of New Agers and neo-pagans danced and whooped in delight Monday as a bright early morning sun rose above the ancient stone circle Stonehenge, marking the summer solstice.

About 20,000 people crowded the prehistoric site on Salisbury Plain, southern England, to see the sunrise at 4:52 A.M. (1152EST), after an annual all-night party.

The event typically draws thousands of alternative-minded revelers to the monument, as they wait for dawn at the Heel Stone, a pockmarked pillar just outside the circle proper, which aligns with the rising sun.

Unlike previous recent years, when the sunrise has been obscured by cloud -- the bright sun bathed the monument in orange and gold on Monday.

"One time in maybe 10 we get a decent sunrise, and that was a good one," said Simon Banton, 45, an education volunteer for English Heritage, the body that manages the site.

As the sun rose, a woman climbed a rock in the circle center and blew a horn, welcoming in the longest day of the year north of the equator. Drums, tambourines, and cheers reverberated in the background.

"It means a lot to us ... being British and following our pagan roots," said Victoria Campbell, who watched on, wearing a pair of white angel's wings and had a mass of multicolored flowers in her hair. The 29-year-old Londoner, who works in the finance industry, also said that "getting away from the city" was a major draw.

"It is stunning," said Stewart Dyer, a 43-year-old National Health Service worker and dancer on his first trip to the solstice celebration. "To actually be able to dance amongst the stones, to be able to touch the stones, to be that close to such an ancient monument is unbelievable."

The annual celebrations at Stonehenge, about 80 miles southwest of London, are a modern twist on solstice celebrations that were once a highlight of the pre-Christian calendar. They survive today largely in the form of bonfires, maypole dances and courtship rituals.

Andy Barrett, a 62-year-old restaurant owner from Kent, said he has been coming to solstice celebrations at Stonehenge for decades.

"It's amazing. The wonderful thing is all these people experiencing it and wondering what this was all for, trying to work out in their own minds -- what was it all?" he said.

Stonehenge's origins remain a mystery, but theories suggest the grounds were part of a huge astronomical calendar. Others say an ancient sun worshiping culture aligned the structure with the midsummer sunrise and the midwinter sunset. The site was used as a cremation cemetery since its inception, archaeologists say, but it is unclear if that was its main function.

"The truthful answer is we don't know exactly what it was for," said Amanda Chadburn, an archaeologist with English Heritage, which manages the site.

Whatever its origins, the construction of Stonehenge -- built with massive stones drawn from up to 150 miles away -- gives insight into an ancient culture, Chadburn said.

The World Heritage site was built in three phases between 3000 B.C. and 1600 B.C. It is one of Britain's most popular tourist attractions with more than 850,000 visitors a year. The solstice is one of the few times access is granted inside the stone circle, which has been roped off since 1978, following years of erosion and vandalism.

Stonehenge was closed during the solstice after clashes between police and revelers in 1985. English Heritage reopened it to midsummer celebrations in 2000, and the event has remained largely peaceful.

Police said Monday they had made 34 arrests, the majority for drug possession, and reported no serious problems.

At midsummer D. H. Lawrence wrote to Blanche Jennings from his house in Derbyshire in England where he was living:

I am unwilling to leave this deck-chair; I refuse to swot; let me write to you then, me lounging here on the grass, where the still warm air is full of the scent of pinks, spicy and sweet, and a stack of big red lilies a few yards away impresses me with a sense of hot, bright sunshine. ... It is a true midsummer day. There is a languorous grey mist over the distance; Shipley woods, and Heanor with its solid church are hidden today; no, I can just see a dense mark in the mist, which is Heanor; but Crich is gone entirely. The haze just falls on Eastwood; the church is blue, and seems fast asleep, the very chimes are languid. Only the bees are busy, nuzzling into some wide white flowers; — and I am busy too, of course.
Posted by Mercury at 5:05 PM

I wasn't at Stonehenge, but as one of those who celebrate the solstices and equinoxes, I can vouch for the fact that these are sacred days to many, and most celebrants do not spend them naked or drunk.

Ah ha, but some do. The Winter Solstice will quickly separate the true believers from the party goers. :)

The Winter Solstice has been one of the biggest parties of the year for 5,000+ years. Just read about the Roman Saturnalia.

I celebrate both Solstices and both Equinoxes as well.