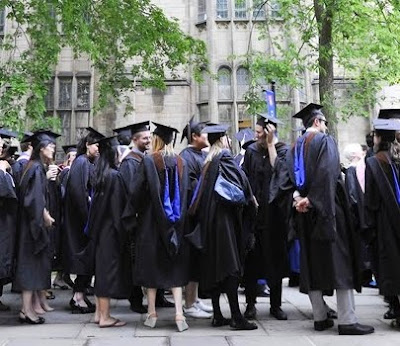 I just knew this would happen. Society lays too much importance on a higher education in gaining security, wealth, power.

"Is a college degree still worth it?"

As U.S. employment patterns evolve, a diploma is no longer a guarantee of a better job and higher pay.

Los Angeles Times
As the warm glow of college commencement ceremonies gives way to the cold reality of today's job market, this year's graduates and their anxious parents might be tempted to wonder whether it was worth it.

After spending tens of thousands of dollars on higher education, often taking on huge debts along the way, many face a job market that doesn't seem to need them. Not only is the American economy producing few new jobs of any kind, but the ones that are being added are overwhelmingly on the lower end of the skill and pay scale.

In fact, government surveys indicate that the vast majority of job gains this year have gone to workers with only a high school education or less, casting some doubt on one of the nation's most deeply held convictions: that a college education is the ticket to the American Dream.

The Bureau of Labor Statistics projects that seven of the 10 employment sectors that will see the largest gains over the next decade won't require much more than some on-the-job training. These include home healthcare aides, customer service representatives and food preparers and servers. Meanwhile, well-paying white-collar jobs such as computer programming have become vulnerable to outsourcing to foreign countries.

"People with bachelor's degrees will increasingly get not very highly satisfactory jobs," said W. Norton Grubb, a professor at UC Berkeley's School of Education. "In that sense, people are getting more schooling than jobs are available."

He noted that in 1970, 77% of workers with a bachelor's degree were employed in professional and managerial occupations. By 2000, that had fallen to 60%.

Of the nearly 1 million new jobs created since hiring turned up in January, about half have been temporary census jobs. Most of the rest are concentrated in such industries as retail, hospitality and temporary staffing, according to the Bureau of Labor Statistics.

Job prospects have improved slightly for college graduates. One out of four college seniors this year had a job waiting for them upon graduation, up from one in five last year, according to a survey by the National Assn. of Colleges and Employers.

But there's still a lot of angst. Kyle Daley, 23, of Walnut Creek, Calif., graduated from UCLA a year ago with a bachelor's in political science and is still looking for a job. Recently he put his resume into an old wine bottle and threw it into the Pacific Ocean.

"I'm trying to try every avenue I can," Daley said.

Economists say it's understandable that the early stages of the recovery are benefiting less-educated workers. They were the hardest hit during the downturn; they're also cheaper and often easier for employers to bring on board than better-educated workers.

No one is arguing that higher education isn't beneficial. Even now, the unemployment rate for college graduates stands at 4.7% — less than half of the figure for workers with only a high school diploma.

Also, federal statistics for 2008 show that men 25 and older with a bachelor's degree pulled down a median salary of $65,800. That compares with a median of $39,010 for men in the same age group who had completed only high school. Earnings for women were broadly smaller, although the pay gap by education was similar in percentage terms to that of male workers.

"In my mind, the data is overwhelmingly clear: The B.A. is worthwhile," said Stephen Rose, a labor economist and research professor at Georgetown University.

What's not as clear as it used to be is whether pursuing higher education will continue to guarantee a substantially more affluent and secure life. Higher degrees today don't always bring higher earnings.

And there's good reason to believe that a bachelor's alone may not be enough to command rising premiums over a lesser education or to open doors to the kinds of jobs that college graduates have been accustomed to.

Increasingly, the job market has become polarized, with the fastest-growing occupations on either the low end or the high end, often for positions that require more education than a bachelor's degree.

Middle-skilled occupations such as sales, office and administration — positions perhaps most readily open to community college graduates — have shown little or no growth over the last decade, and they fell sharply during the recession, according to research by David Autor, an economics professor at MIT.

Meanwhile, record numbers of people are enrolling in colleges. Those in two-year colleges made up 43% of the 16.4 million enrolled in degree-granting institutions in the fall of 2008, the latest year for which numbers are available. Even so, Autor's research shows that inflation-adjusted wages of workers with less than a four-year college degree fell steeply between 1979 and 2007, particularly for men.

During that same period, the real wages for college graduates rose 10% for men. But the biggest gains were made by male workers with more than a bachelor's degree; they saw a 26% jump in earnings.

"A [four-year] college degree is not the security as it once was," Autor said, although he quickly added that the alternative was far worse. "Middle-class jobs for non-college graduates are going to be few and far between."

Many employers regard a four-year college degree as a must for many jobs, even for positions that can be handled by high school graduates. That may partly reflect a kind of education inflation that's come with soaring college enrollment and many students earning multiple degrees.

Kim Megonigal, chief executive of Kimco Staffing Services in Irvine, says he hires only college graduates at his firm.

"We believe [a degree] shows a level of desire and motivation to improve themselves beyond entry-level jobs," he said. "We're looking for people who can grow with the company."

Just a few years ago, when the jobless rate was below 5%, Megonigal couldn't find enough college graduates to take certain office and administrative jobs. Today he has far more overqualified applicants than openings.

The Bureau of Labor statistics predicts some clear winners in the years ahead. Registered nurses, who generally have an associate's degree, are likely to see the biggest demand, their numbers growing by more than 580,000 over the coming decade. The bureau sees biomedical engineers as the fastest-growing occupation, expanding by 72% from 2008 to 2018. But their numbers are tiny — only 16,000 such workers in 2008.

The current economy aside, some of the angst about the future job market for college graduates stems from not knowing what area, besides healthcare, will produce a bunch of high-quality jobs, or how much more of traditionally white-collar service work will be automated or lost to foreign competition, as manufacturing has for decades.

Alan Blinder, a Princeton professor and former Federal Reserve vice chairman, says it won't be surprising years from now if a carpenter in the U.S. earns more than a college-educated computer operator. In fact, the data suggest that education bears little relationship to jobs that are vulnerable to offshoring, he says.

On balance, Blinder says, "there's little doubt a college education is a good investment for most students."

But he offers this advice: "Don't train yourself or your children [in work] that a computer can do or a smart kid in China or India can do. Because that's ferocious competition."
Posted by Mercury at 8:02 AM