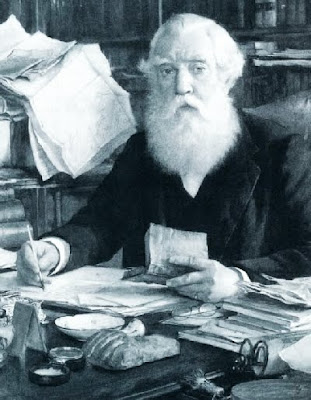 Austen Henry Layard
March 5th, 1817 to July 5th, 1894
In 3123 BC, a Sumerian astronomer saw a devastating asteroid, perhaps a half-mile wide, according to an interpretation of a clay tablet, made by researchers from Bristol University, reported in The Times on 31 Mar 2008. The ancient date was indicated by a computer recreation of the night sky using symbols on the tablet recording the positions of constellations The Planiform tablet found by Henry Layard at Nineveh, likely a 700 BC copy of the astronomer's notes, described in cuneiform a "white stone bowl approaching" that "vigorously swept along." The asteroid probably crashed into the Austrian Alps, leaving a swath of cataclysmic damage such as, for example, the Genesis destruction of Sodom and Gomorrah.

Telegraph.co.uk
British scientists have deciphered a mysterious ancient clay tablet and believe they have solved a riddle over a giant asteroid impact more than 5,000 years ago.

Geologists have long puzzled over the shape of the land close to the town of Köfels in the Austrian Alps, but were unable to prove it had been caused by an asteroid.

Now researchers say their translation of symbols on a star map from an ancient civilisation includes notes on a mile-wide asteroid that later hit Earth - which could have caused tens of thousands of deaths.

The circular clay tablet was discovered 150 years ago by Sir Austen Henry Layard, a leading Victorian archaeologist, in the remains of the royal palace at Nineveh, capital of ancient Assyria, in what is now Iraq.

The tablet, on display at the British Museum, shows drawings of constellations and pictogram-based text known as cuneiform - used by the Sumerians, the earliest known civilisation in the world.

A historian from Azerbaijan, who believes humans originally came to Earth from another planet, has interpreted it as a description of the arrival of a spaceship. More mainstream academics have failed to decipher its meaning.

Now Alan Bond, the managing director of a space propulsion company, Reaction Engines, and Mark Hempsell, a senior lecturer in astronautics at Bristol University, have cracked the cuneiform code and used a computer programme that can reconstruct the night sky thousands of years ago to provide a new explanation.

They believe their calculations prove the tablet - a copy made by an Assyrian scribe around 700 BC - is a Sumerian astronomer's notebook recording events in the sky on June 29, 3123 BC.

The pair say its symbols include a note of the trajectory of a large object travelling across the constellation of Pisces which, to within one degree, is consistent with an impact at Köfels.

Mr Hempsell said: "All previous work has drawn a blank on what the tablet is about.

"It is such a big jigsaw and the pieces we have found fit together so well that I think we have a definitive proof."

The Köfels site was originally interpreted as an asteroid impact, however the lack of an obvious impact crater led modern geologists to believe it to be simply a giant landslide.

However, the Bond-Hempsell theory, outlined in their book published today, A Sumerian Observation of the Köfels Impact Event, suggests that the asteroid left no crater because it clipped a mountain and turned into a fireball.

Mr Hempsell said: "The ground heating, though very short, would be enough to ignite any flammable material, including human hair and clothes.

"It is probable more people died under the plume than in the Alps due to the impact blast."

He added that extreme changes caused to rock and other substances at the site had previously led to the Köfels impact being erroneously dated to around 8,000 years ago.

It has been noted that Austen Henry Layard put the "adventure and romance" in archaeology.

Here are a few of Layard's works...


Discoveries among the ruins of Nineveh and Babylon


Nineveh and Its Palaces...


Nineveh and Its Remains...


Outline of the history of Assyria...


The Buried City of the East, Nineveh...


The Ninevah Court in the Crystal Palace