Extinct species...product of our desires and needs 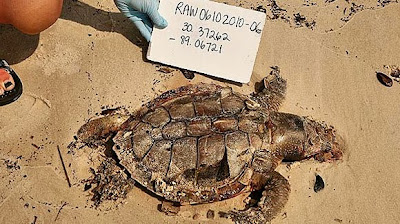 Kemp's Ridley turtle
It is a price we pay for things we desire and need be they feathers, fur, lumber, minerals...or oil.

On an Alabama beach, the animals return to their birthplace to deposit their eggs. But this year, hundreds have been found dead or stranded, and scientists aren't positive the oil is the sole culprit.

latimes.com
Each summer, a ritual millions of years old unfolds on this beach, next to the high-rise condos and beach chairs, the T-shirt shops and the Hooters across the road. A 300-pound loggerhead turtle drags herself out of the water for the first time since her birth, probably on the same beach, 18 years ago.

Under the moonlight, she kicks a 2-foot-deep hole into the sand, drops in a gleaming heap of eggs, covers it and then lumbers back out to sea. Two months later, 100 or more tiny turtles will scratch their way up through the sand, glimpse the shine of the moon and stars on the water that serves as some kind of celestial GPS, and head for the sea.

Fishermen's nets, children with sand shovels, confusing waterfront lights and pollution have plundered the sea turtles, leaving all five species that inhabit the Gulf of Mexico endangered or threatened. Now they face what may be the most serious threat of all: millions of gallons of spilled oil, much of it in the waters they must navigate to reach their Alabama nesting beaches.

More than 350 turtles have been found dead or foundering along the Gulf Coast since the April 20 well blowout, a number wildlife biologists find alarming. At least 62 turtles have been found covered in oil. Rescuers in Gulfport, Miss., on Thursday were called to collect 20 turtle carcasses, the highest daily number they have ever recorded. Researchers say there is no way of knowing how many more turtles have perished at sea.

"Before, we didn't deal much with dead turtles. The calls we'd get were few and far between," said Tim Hoffland, director of animal care at the Institute for Marine Mammal Studies in Gulfport.

"But since this oil spill, it's just gone berserk," Hoffland said. "I'm getting calls from my people saying they can't even walk a quarter-mile on the beach without running into dead turtles. It's crazy."

The turtle deaths pose a complex forensics mystery for scientists, many of whom say they are not ready to blame it all on the oil spill. Many of the stranded turtles, for example — five times the number seen in recent years — have been caught by fishing hooks. Toxicology tests will try to determine whether a toxic algae bloom may have killed some of the animals.

Many researchers say the spill could have unleashed a tangled web of threats that is killing the turtles even without swathing them in oil.

Some suspect shrimping boats — unleashed recently for what many fishermen feared could be their last chance to harvest before oil kills off or contaminates their catch — may have harmed the turtles in their eagerness. It's possiblethey dispensed with the required openings in their nets and inadvertently trapped turtles, leaving them unable to surface for air and causing them to drown.

Oil or dispersants may have poisoned the turtles or the fish and crabs they rely on for food; the turtles then may have been driven toward fishing bait along the piers, resulting in the large number of hookings.

In a little more than half of the roughly 70 necropsies performed so far, there has been evidence of either acute toxicosis — of unexplained origins — or drowning, said Michael Ziccardi, director of the Oiled Wildlife Care Network at UC Davis, who has been working in the field to help diagnose the deaths.

"What we're doing is a CSI for sea turtles. We're taking all of that information and pursuing the clues to try to see why these animals are dying," he said.

So important are their findings — illegal fishing, for example, could carry criminal penalties — that the turtle carcasses are being marked with evidence tags and kept under lock and key in a refrigerated trucking container at the Gulfport marine mammal facility until they can be picked up by government scientists.

Though turtle strandings around the world are relatively common, the number on the Gulf Coast has averaged only 47 a year over the last five years, according to the National Oceanic and Atmospheric Administration. The significant increase this year raises an uncertainty: How much of the bigger reported number is due to the larger number of people on the beach looking for troubled animals?

Here on the white beaches of Alabama, there are typically far fewer sea turtle nests than the tens of thousands in Florida. The loggerheads that make their way here are so threatened by the bustling resort development that volunteers with a group called Share the Beach patrol the 47 miles of sand at dawn each morning. They look for new nests and fence them off with posts, tape and warning signs — an effort that has won ready cooperation from residents and tourists.

Mike Reynolds, a real estate agent and auctioneer from Gulf Shores who heads the group, said he fears there are already signs that fewer turtles have made their way toward shore through the oil and tar balls.

"By this time of year, we should have 11 nests. We have six," he said one morning last week as he motored in a dune buggy down the beach, looking for the long, sliding track known as a "crawl" that shows a female turtle has made her way onto the beach to deposit her eggs.

Reynolds said the volunteers began their work eight years ago to counteract the devastating effect of development on the newly hatched sea turtles, which were increasingly turning toward the urban lights on shore rather than the safe glint of starlight on the sea.

"Back in the late '90s, we lost tens of thousands of turtles," Reynolds said. "They'd start going to the light; they'd end up getting dehydrated in the dunes, foxes would eat them, coyotes would eat them, and you'd drive down the road and you'd find squished baby sea turtles."

Since then, local officials have passed an ordinance minimizing lights on the beach during hatching season. Just before the babies emerge, volunteers dig a deep trench from the nest directly to the sea.

But in what is normally a busy nesting season, sticky globs of oil have marred the beach. Sargassum seaweed, a favorite habitat for young turtles, has washed up soaked with oil. The last nest laid on the beach, on June 3, came exactly one day before the first waves of oil showed up in Gulf Shores.

Are the turtles merely slow this year, Reynolds wonders? Or unable to make it through the oil? Or dead?

The volunteers — a postal carrier, an office manager, a teacher, a retired transportation specialist — are motivated by a growing fear, and a lingering sense of obligation: Whatever primordial impulse drives these slow, heavy turtles toward their shores must be honored.

"These turtles circumvent the globe, and no matter where they go, 18 or 20 years after they were born, they're driven to come back to this beach to nest. It doesn't matter if it's oiled, or if it's got too much light on it, or too many people or too much trash," Reynolds said. "So we can have our houses here, have our condos, get our suntans, as long as we remember this is an important habitat for an ancient creature that doesn't have a choice."
Posted by Mercury at 4:37 AM