Think BP oil spill is bad?...think 100 years ago in California 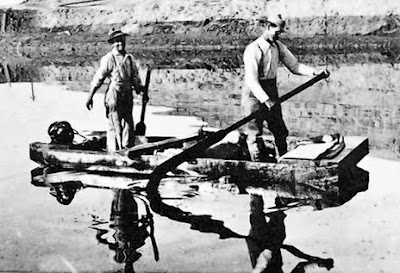 Workers were “covered from head to foot with the black sticky stuff,” one author wrote of the Lakeview gusher. The site between the Kern County towns of Taft and Maricopa became a tourist draw.
"California's legendary oil spill"

latimes.com
Horrific though the Gulf of Mexico oil spill has been, its output is still short of what occurred a century ago in scrubby brush about 110 miles north of Los Angeles — site of the Lakeview gusher.

While some experts believe the well off Louisiana has spewed upwards of 60 million gallons of oil into the gulf, the Lakeview well rained about 378 million gallons over an area between the towns of Taft and Maricopa.

The spill following the April 20 oil rig explosion in the gulf is, of course, a much bigger environmental and economic disaster. But the two wells had one thing in common -- neither could be immediately capped.

Lakeview's geyser of crude, in fact, flowed for more than 17 months.

"It roars and rips like hell," the publication California Oil World said at the time. "It smells and terrifies like hell….Some of those who watched it the first night declared that it ejected glowing stones."

And to think, Lakeview's foreman was a guy nicknamed Dry Hole Charlie because of his association with unproductive wells.

Perhaps the only person unsurprised by the Lakeview gusher was a mysterious old-timer fond of telling anyone who would listen that reddish grass meant oil below — something about the sunburned seed pods and moisture and the presence of underground faults. (Who needed geologists back then?)

The story has it that a novice oil-seeker named Julius Fried took him at his word, authors Kenny Franks and Paul Lambert wrote in "Early California Oil."

Fried, a grocery salesman, purchased one such patch of ground and co-founded the Lakeview Oil Co.

The first several months of drilling below the reddish stalks, however, yielded nothing but brown earth, yellow clay and gray sand.

When Lakeview encountered financial problems, Los Angeles-based Union Oil (now part of Unocal Corp.) bought a controlling interest in the company but mainly because it wanted to use the area for storage containers.

After more months of unsuccessful drilling, the owners in Los Angeles sent word to abandon the effort, The Times recalled in 1911. But the optimistic men at the site "kept on in disobeyance of orders."

The eruption not only demolished the wooden derrick but created "such a large crater that nobody had a chance to get to what was left of the hole to try to control it," author Max Miller wrote.

"What we feared was an early rain," recalled Charles "Dry Hole" Woods, confronted with too much of a good thing. "A flash flood could have spread our ocean of oil down over the valley below. So we went up into the hills with an army of 600 men and dammed up the mouths of the canyon with earth walls 20 feet high and 50 feet thick."

The well was circled by sand-bag barricades and a roof was thrown over the mouth.

In danger downhill was the Buena Vista Lake, inspiration for the Lakeview name. Fire was also a terrifying possibility.

The workers were "covered from head to foot with the black sticky stuff," one author wrote, "standing in a shower of hot oil that caused the skin to blister and peel off wherever it stuck."

The site became a tourist attraction.

Special trains carried gawkers to Taft. Preachers showed up to lead prayers that the geyser of crude "would not flood the world," as Miller wrote.

Some folks saw the gusher as a sign of disapproval from the Almighty. Hadn't one preacher in Pennsylvania warned drillers that the oil was meant to remain in the earth to "kindle the fires of Hell"?

Finally on Sept. 9, 1911, thousands of feet below the surface, the well caved in and sealed itself. It "died as suddenly as it was born," wrote author William Rintoul.

There had been no flood or fire. And no one was killed, though the long-term effects on the health of the workers were never studied (some complained of skin problems).

Of the 378 million gallons of oil that gushed out, about 40% was captured. The ensuing surplus dropped the price of oil by about half, to 30 cents a barrel.

Dry Hole Charlie moved on and in the following years "lived up to his previous reputation by drilling only dry holes, one after another," Miller wrote.

Today, a plaque, California Historical Landmark No. 485, marks the site of what it calls "America's most spectacular gusher." The terrain is nearly as barren as it was a century ago.

Agnes Hardt, a docent with the West Kern Oil Museum in Taft, took an international group of archeologists out to the site a while ago. "I could tell they were disappointed, like, `We drove out here for this?'" she said. "It's more exciting to read about it than it is to see."

A brief YouTube video ( http://www.youtube.com/watch?v=9qFrwi4pnGg ) shows the remains of the well cavity, a few sandbags and the nearby surface where the ground turned to asphalt.

There are no oil wells in the area. But there doesn't seem to be any red grass, either.
Posted by Mercury at 5:14 PM