Lab explosion at the University of Missouri in Columbia, Missouri 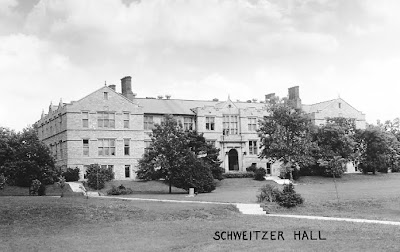 The Kansas City Star
An explosion at University of Missouri this afternoon injured four people and damaged Schweitzer Hall.

University officials said the four people injured, none critically, were taken to University Hospital. One person was admitted and was in good condition.

At least one lab tech was injured, apparently by glass, but no other details about the injuries were released. The names of the injured and whether they were students or faculty also was not released.

The explosion about 2:20 p.m. blew out windows on the second floor of the building, which houses chemistry and bio-chemistry labs, university officials reported.

Christian Basi, a university spokesman, said fire officials suspect that a 2,000-pound hydrogen tank in one of the laboratories exploded.

The explosion, which is still being investigated, is thought to have been caused by a spontaneous combustion of gases, including hydrogen and nitrogen, that were being used in a research experiment. The building was occupied at the time of the explosion and it was evacuated.

The interior of the laboratory where the explosion occurred was destroyed, and an adjacent lab also sustained major damage, including water damage, said Mary Jo Banken, a university spokeswoman.

University police, Columbia fire and emergency medical crews were still on the scene at 3 p.m.

Schweitzer Hall, located on the northeast side of campus on College Avenue, houses the MU Department of Biochemistry, part of the School of Medicine and the College of Agriculture, Food and Natural Resources. The three-story building was built in 1912 and named after Paul Schweitzer, the university’s first full-time professor of chemistry.
Posted by Mercury at 3:38 PM