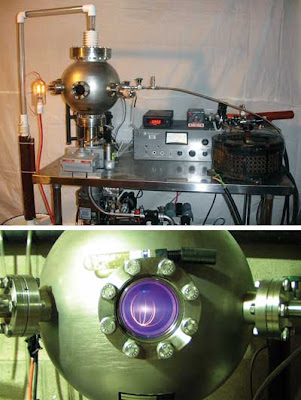 BBC News
Many might be alarmed to learn of a homemade nuclear reactor being built next door. But what if this form of extreme DIY could help solve the world's energy crisis?

By day, Mark Suppes is a web developer for fashion giant Gucci. By night, he cycles to a New York warehouse and tinkers with his own nuclear fusion reactor.

The warehouse is a non-descript building on a tree-lined Brooklyn street, across the road from blocks of apartments, with a grocery store on one corner. But in reality, it is a lab.

In a hired workshop on the third floor, a high-pitched buzz emanates from a corner dotted with metal scraps and ominous-looking machinery, as Mr Suppes fires up his device and searches for the answer to a question that has eluded some of the finest scientific minds on the planet.

In nuclear fusion, atoms are forcibly joined, releasing energy. It is, say scientists, the "holy grail" of energy production - completely clean and cheap.

The problem is, no-one has found a way of making fusion reactors produce more energy than they consume to run.

Mr Suppes, 32, is part of a growing community of "fusioneers" - amateur science junkies who are building homemade fusion reactors, for fun and with an eye to being part of the solution to that problem.

He is the 38th independent amateur physicist in the world to achieve nuclear fusion from a homemade reactor, according to community site Fusor.net. Others on the list include a 15-year-old from Michigan and a doctoral student in Ohio.

"I was inspired because I believed I was looking at a technology that could actually work to solve our energy problems, and I believed it was something that I could at least begin to build," Mr Suppes told the BBC.

While they might un-nerve the neighbours, fusion reactors of this kind are perfectly legal in the US.

"As long as they [private citizens] obtain that material [the components of the reactor] legally, they could do whatever they want," says Anne Stark, senior public information officer for California's Lawrence Livermore National Laboratory.

During fusion, energy is released as atomic nuclei are forced together at high temperatures and pressures to form larger nuclei.

Scientists say devices like Mr Suppes' pose no real threat to neighbouring communities or the environment because they contain no nuclear materials, such as uranium or plutonium.

"There is no chance of any kind of accident with fusion," says Neil Calder, communications chief for Iter, a multi-national project begun in 1985 with the aim of demonstrating the feasibility of fusion power.

"There's no CO2 pollution, there's no greenhouse gases, you can't use it for proliferation [the spread of nuclear weapons] - it has so many advantages," he said.

Government-led efforts to produce power from fusion have been going on around the world for 50 years.

Iter - funded by US, Japan, Russia, India, China, and South Korea - is working on a multi-billion dollar, advanced reactor, due to be built in the south of France by 2019.

But the availability of equipment and technology has seen an increasing number of amateurs enter the fray.

"We have people in the whole gamut, from physicists to electronics people to car mechanics to even one janitor - and all these people share a common bond to do nuclear fusion in their home," said Richard Hull, founder of Fusor.net.

Some experts are sceptical that all these people are producing fusion reactions, but when he demonstrates his device, Mr Suppes says a bubble meter placed next to the reactor indicates that a fast neutron, a by-product of fusion, has been produced.

The amateur scientist began building his reactor two years ago, purchasing parts on eBay with $35,000 of his own money and about $4,000 he raised on a website that connects artists and inventors with private investors.

"Real researchers that are working at Los Alamos [US Department of Energy National Laboratory] and are working at Lawrence Livermore are following this and commenting on it, even though it's not an officially sanctioned project," he says.

Mr Suppes sees his work in nuclear fusion as more than just a hobby, and he intends to try to build one of the world's first break-even reactors - a facility producing as much energy as it uses to operate.

"He now has to go out and do what everybody else has to do, which is to convince people to invest in his project - whether its government funding or private funding to carry him through," said Mr Calder.

Mr Suppes is hoping to build a break-even reactor from plans created by the late Robert Bussard, a nuclear physicist who drew up plans for a fusion reactor that could convert hydrogen and boron into electricity.

Work on a scaled up version of a Bussard reactor, funded by the US Navy, has already been taking place in California.

But Mr Suppes believes he will be able to raise the millions of dollars it takes to build a Bussard reactor because he feels someone with enough money "will feel they cannot pass up the opportunity" to find out if it will work.

Iter said it would be wrong to dismiss out of hand the notion that an amateur could make a difference.

"I won't say something that puts these guys down, but it's a tricky situation because there is a great deal of money and time and a lot of very experienced scientists working on fusion at the moment," said Mr Calder.

"But that does not eliminate other ideas coming from a different group of people."
What neighbours say

"A homemade nuclear fusion reactor being built in Brooklyn - I would have thought there would be some sort of rules and laws about messing around with nuclear fusion in your apartment," said Brooklyn resident Stephen Davis. "I'm not sure I'd like that living right next to me."

"The fact that he's trying to form a new kind of energy is all well and good," said another local, Christopher Wright. "But without the proper scientific work behind it, I don't know if it's too good of an idea."

But others had a more positive outlook on Mr Suppes' reactor.

"I think it's a good idea. If a guy can make an invention like that, it should definitely be spread around so we don't need to depend on oil," said Brooklynite Chris Stephens told the BBC.

"We need to do something that's new and more creative for society."
Posted by Mercury at 6:23 AM