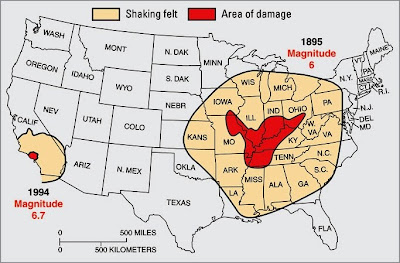 Most of you probably never heard of it, being more informed and aware of California earthquakes. I am in the extreme Northwest section of the state of Missouri and such effects would be minor here but the biggest issue to face would be refugees.

The Associated Press
The New Madrid seismic zone is capable of producing a massive earthquake that could devastate parts of the central United States, according to a study publicly released this week by the University of Illinois.

A 7.7-magnitude temblor, the study said, could leave 3,500 people dead, more than 80,000 injured and more than 7 million homeless. In all, the study commissioned by the Federal Emergency Management Agency said the immediate economic impact would be $300 million.

The study also concluded that authorities, utilities and others in eight central and southeastern states that would most likely be affected are, in many cases, ill-prepared for the aftermath. Providing shelter for the homeless, repairing and retrofitting bridges, and more would be difficult with a transportation network that would likely be heavily damaged.

"I think everybody knows, as we saw things unfolding (in the study), that there are significant gaps in the preparedness for this type of earthquake," the study's lead author, University of Illinois professor Amr Elnashai said Friday. "FEMA will have a very clear idea of what is missing, and hopefully they will have some type to fill some gaps."

FEMA is working toward holding a national-level disaster drill next year that simulates a big New Madrid quake.

"This comprehensive study has not only assisted in our planning and preparedness efforts, but should serve as a reminder to the public that disaster can strike at any time, and we all need to be prepared," FEMA spokesman Bradley Carroll said in a statement.

The study — completed late last year and turned over to FEMA but only just publicly released — focuses on Missouri, Arkansas and Tennessee, where the New Madrid seismic zone lies deep underground, as well as Illinois, Kentucky, Mississippi, Indiana and Alabama.

The fault zone has a long history of big earthquakes, including four in 1811 and 1812 estimated to have been magnitude 7.0 or greater. The region was sparsely populated but the quake caused land slides and waves on the Mississippi that swamped boats; it also opened deep fissures in the ground. The shaking was felt as far away as New England.

The Illinois study assumed a magnitude-7.7 quake based on recommendations from the U.S. Geological Survey, Elnashai said.

About 7.2 million people wouldn't be able to live in their homes, at least not within a few days after the initial quake, and 2 million would temporary shelter.

"Many, many, many — maybe 80 percent — of the numbers you are seeing in the report would turn into long-term dislocation," Elnashai said.

The study also concluded that nearly 715,000 buildings would be damaged and 2.6 million households would be without electricity.

The study predicts extensive damage in both St. Louis and Memphis, Tenn., the two largest cities near the fault zone.

"There are also disruptions of the transport system that we think will be debilitating," he said. "(State and local governments) will need to fix and repair lots of bridges, more than we're ready to handle."

Utilities also are likely to struggle to find enough contractors to quickly repair what could be many substantial natural gas leaks, the study predicts.

The study urges state and local governments to retrofit hospitals, fire stations, police stations, nuclear power plants and other essential facilities to improve their odds of holding up in a big quake.

The study should be a planning tool for the affected states, Elnashai said. But he said it should also help convince state officials and the public that preparedness is worth considering and paying for, particularly during a recession.

"Everybody's having trouble making their cases (for money)," he said.

In Tennessee, recent floods already have shown emergency planners some of the things they're not ready for.

"It is not just like a tornado, only bigger," state Emergency Management Agency spokesman Jeremy Heidt said. "We're definitely aware of some of the shortfalls that every state faces."

One big concern for authorities in Tennessee is the likelihood that Memphis, a city of about 670,000 people, might not be able to get water to its citizens. Heidt said the state is working with the local utility to beef up the water supply.

"If their distribution system is broken apart by the earthquake, which we expect to be the case, they still might be able to generate potable water," he said, leaving only the problem of distributing it.

Southern Illinois is likely to be heavily affected by the big quake assumed by the study. The state Emergency Management Agency is determining the gaps between what local jurisdictions are prepared for and what they should be ready for, said Phillip Anello, who coordinates the agency's earthquake program.

"There's a lot of things that have already been identified and have been worked on from a state level to help with those gaps," he said, noting work to strengthen search and rescue teams.

Patti Thompson, a spokeswoman for the state agency, added that federal efforts to beef up homeland security in recent years also have placed communications equipment and other infrastructure in states like Illinois.
Posted by Mercury at 7:05 PM