Abby Sunderland and a parent's perspective 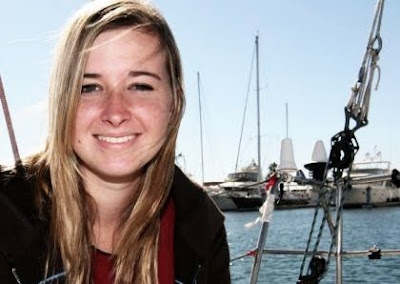 "A lesson in brave parenting"

latimes.com
What in heaven's name were her parents thinking?

For a lot of people, that was the second thought that came to mind upon hearing that Abby Sunderland, the 16-year-old Thousand Oaks girl attempting to sail solo around the world, was rescued by a French fishing vessel Saturday after being cast adrift in the middle of the Indian Ocean. (The first thought, of course, was: Thank God she's alive.)

Now that Abby's OK, the inevitable storm of criticism is raining down on her parents, Laurence and Marianne, who wished their daughter bon voyage when she cast off from Marina del Rey in January. Allowing a 16-year-old girl to sail alone around the world — were they insane?

Not at all. Unusual, yes. But hardly "the worst parents in the world," as I've heard them called recently. In fact, they may be the opposite. Like Paul Romero, the father of Jordan Romero, the 13-year-old Big Bear Lake teenager who climbed Mt. Everest last month, the Sunderlands are practicing something bold and rare these days: brave parenting.

Raising kids today (I have an 11-year-old and an 8-year-old) is like working on a construction site with an overzealous risk manager. Everywhere you look there are signs reminding parents that Safety Is Job One. We're told to cut up hot dogs and grapes to prevent choking, to lash the kids into car seats, to never let them out of sight at the park. A certain amount of this is progress, of course. I'd rather my kids not launch through the windshield like human missiles in a head-on, thank you.

But in our obsession with safety, we've lost sight of the upside of risk, danger and even injury: raising bold children who are prepared for adventure and eager to embrace the unfamiliar.

The habitat of my own children is constrained. It contains entirely too many screens and couches. And this constraint is not unique to my family. As Richard Louv pointed out in his groundbreaking book, "Last Child in the Woods," kids are playing outside less often and for ever-shrinking periods of time. Sandra Hofferth, a researcher at the University of Maryland, found that the amount of time kids spent outside doing things such as walking, hiking, fishing and beach play declined by 50% between 1997 and 2003. Not long ago, up to half of the kids in this country walked or rode their bikes to school. Now fewer than 1 in 5 do. That inactivity has consequences. In the 1960s, less than 5% of American kids were obese. Now it's pushing 20%. So seldom do kids wander in the woods that "nature deficit disorder" has become a common concern among parents of my generation.

How nutty have things gotten? Last month, Lenore Skenazy, who resists the bubble-wrapping of childhood at her website freerangekids.wordpress.com, declared May 22 a national holiday: Take Our Children to the Park and Leave Them There Day. The idea was so outlandish that the New York Times and the San Francisco Chronicle deemed it worthy of ink. Skenazy's radical notion was to drop off your kids at the park. Not in Times Square or the Tenderloin. At the park.

The Sunderlands aren't crazy. They're subversives. They're undermining a dominant culture that pumps parents full of fear and finds us at fault every time our child skins a knee.

Let's be clear: Brave parenting isn't synonymous with wise parenting. I have my own reservations about a 13-year-old like Jordan Romero climbing Everest. The maturity of a 13-year-old can't compare with a 16-year-old. It's why we allow teenagers to drive at 16 and not 13. ("I'm not sure a 13-year-old can be fully cognizant of the lethality of that environment," one veteran Everest climber told me. "I don't know if they're old enough to understand.") Last year, Dutch authorities were so alarmed by 13-year-old Laura Dekker's plan to sail alone around the world that they didn't just stop her from setting sail; they punished her father by revoking partial custody. Nanny state, thou doth appear ridiculous in thy judgments and thy wooden clogs.

Are stage parents pushing their kids into these adventures? I have yet to run across one. The money and fame are too small. Sponsorships in the adventure world usually consist of a couple of free tents and a few hundred dollars, to offset costs that can run to $100,000. We aren't talking Nike shoe contract money here. There are murmurings this week about the Sunderlands signing a reality TV deal. To be honest, that makes me a little nervous. But consider that Abby's older brother, Zac, did the around-the-world gig last year with no reality TV deal. Kate Gosselin-size fame doesn't seem to be the motivating factor.

To me, the bright line in these situations is the age of 16. It's taken us a century of trial and error to settle on that boundary in terms of driving (a.k.a., the ability to deal death to oneself and others), and it seems an apt guideline for these sorts of adventures as well. Word to the Dutch: That's guideline, not law.

And while I question the wisdom of a 13-year-old going up a Himalayan peak or sailing solo, I can't fault the impulse behind it. I applaud it. I'm not about to rope up with my 11-year-old daughter on K2, or even Mt. Rainier. That's not who she is. And if it were, she'd still be too young. But the brave parenting of the Sunderlands and the Romeros forces me to reconsider the constraints I put on my kids. It helps me lead my son and daughter to the edge of the woods and tell them, go farther now. On your own.
Posted by Mercury at 5:31 PM