Monet, science, and behind the scenes 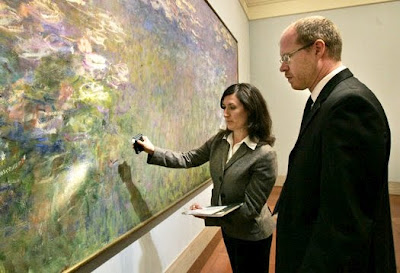 Using a special flashlight to check colors, Nelson-Atkins associate conservator Mary Schafer examined Claude Monet’s “Water Lilies” alongside Simon Kelly, associate curator of European painting and sculpture. The museum is performing an intensive scientific examination of the work and will share findings with the public.
"Art and science intersect at the Nelson as Monet's 'Water Lilies' is examined"

And there’s a brash appeal to the idea of the artist painting outdoors, working quickly to record the moment.

Science, however, tells a quite different story of how these 19th-century French rebels approached their canvases, and with the help of a $1 million challenge grant from the Andrew W. Mellon Foundation, the Nelson-Atkins Museum of Art will share that story with the public, beginning later this week.

The grant will enable the museum to perform intensive scientific examination of its large impressionist painting, “Water Lilies,” by Claude Monet, and other works in the French painting collection. Its main purpose is to fund an endowment to bring in outside scientists to study works in the collection.

Part of the “Water Lilies” study will be conducted in the public eye, fitting for one of the most popular paintings in the museum’s collection.

Museum visitors will be able to watch the conservation staff at work on the Monet on Thursday and Friday and again on July 1 and 2 in the impressionist galleries in the Nelson-Atkins Building.

The sessions offer a chance to peer over the artist’s shoulder, said Elisabeth Batchelor, director of conservation and collections management, and “to give people a much better idea of what it was really like for Monet to paint.”

The museum already has taken X-rays of “Water Lilies” that debunk the popular notion that he painted quickly and impulsively.

“That’s all wrong,” Batchelor said. “They look very spontaneous but are not. You can see how he changed his mind and really labored over the composition of the painting.”

These findings and the results of future studies will be part of a new catalogue of the museum’s French paintings collection and a special exhibition next spring.

To secure the $1 million grant, the Nelson must raise $750,000 in the next two years. In the meantime, the Mellon Foundation has awarded the museum $100,000 so that it can begin work right away on the French paintings.

At nearly 14 feet long, “Water Lilies” is so big that Batchelor decided it was best to bring the staff to the painting rather than remove it from the wall.

But the piece will be moved next spring — to the special exhibition galleries in the Bloch Building, where it will be joined by “Water Lilies” canvases from the St. Louis Museum of Art and the Cleveland Museum of Art.

The three works were painted as a set, or triptych, that stretches 42 feet. They have not been displayed together since 1979.

Simon Kelly, the museum’s associate curator of European painting and sculpture, envisions an introductory area with photographs of Monet’s garden in Giverny, France, and its water lily ponds to establish ambience. The area will also feature an early film of Monet painting in the garden. The end of the exhibit will feature technical information, light boxes and diagrams.

“Much of that material,” Kelly said, “will be generated as the work is studied using high magnification, ultraviolet radiation, infrared radiation and X-rays funded by the challenge grant.”

Although Kelly will leave the museum in September to become curator of modern and contemporary art at the St. Louis Art Museum, he said he would continue to be involved in the catalogue and exhibition.

Through X-rays, Kelly has already discovered that Monet painted over a large raft of water lilies that appeared in an earlier version of the Nelson’s painting. Their removal creates a shift from depth to flatness, he said, that anticipates modernist abstraction.

A key player in the “Water Lilies” study is Mary Schafer, the museum’s associate conservator. This week, as the public watches, Schafer will conduct some of her examination with a microscope and will also do an ultraviolet exam with all the gallery lights turned off.

At 11 a.m. and 2 p.m. each day, Schafer will share her findings with gallery visitors and take questions. While she works, a docent will be on hand to talk to the public, and the gallery will display one of the X-rays that have generated so much discussion.

The Mellon Foundation grant is also paying for the museum to bring in an outside scientist.

Next month, Johanna Bernstein from Rutgers University’s Institute for Advanced Materials, Devices and Nanotechnology, will visit the Nelson to conduct a study of Monet’s pigments.

“If all goes as we expect it will, I will have an opportunity to take cross-section samples,” Bernstein said. “It’s something done fairly routinely in conservation these days. The samples are about the size of a pinprick. They are then embedded into a resin and examined under various types of microscopy.”

The paint samples will be taken with scalpels and “tiny, tiny blades” under a microscope.

Bernstein said her examinations will reveal paint layer structure and help identify elements of each layer.

“From there, you can interpret what those pigments probably are,” she said.

Kelly said that the present study marks the first technical analysis of the Nelson’s “Water Lilies” and that the palette appears to be similar to a “Water Lilies” painting at the National Gallery in London. Bernstein plans to compare her findings to a recent study of the London work.

Bernstein has been working with the Nelson for the past 15 months and has examined the museum’s coffin of Meretites and works by Honore Daumier and the Barbizon School of French landscape artists.

She is one of a series of outside experts the museum is using thanks to the Mellon Foundation grant.
Posted by Mercury at 5:42 PM