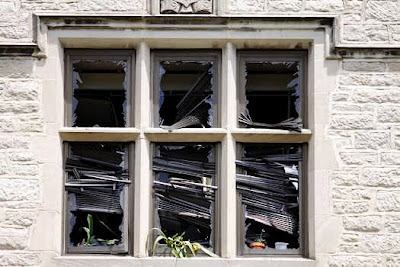 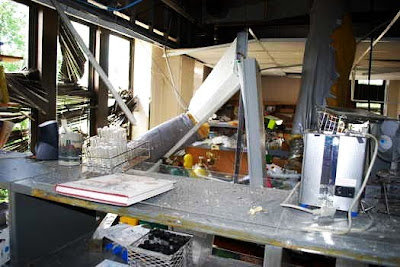 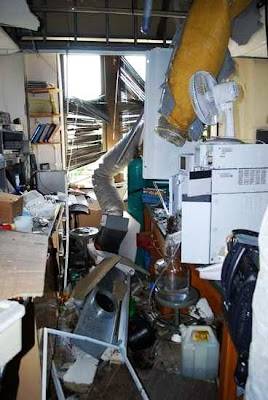 "Certainly this was an accidental explosion, but the lab looks like a bomb went off," said Columbia Fire Department Capt. Eric Hartman, who was on the scene.

In a news release, Hartman said the explosion was caused by human error in operating an anaerobic hood — an oxygen-free chamber used for working with bacteria that can't survive in oxygen. Hartman said lab personnel ignored a "warning system" designed to tell researchers when too much hydrogen enters the chamber and becomes flammable. An explosion resulted when the gas came into contact with an ignition source, the release said. The source of the ignition remains unknown.

A 2,000 pounds per square inch hydrogen tank did not explode, as first reported. Investigators said it remained intact.

The lab technician working with the anaerobic hood suffered a life-threatening impact injury to the chest in addition to burns, Hartman said. That person was transferred to University Hospital by ambulance after the explosion, as were two others with moderate injuries; the fourth person with minor injures was transferred to the hospital via a "private vehicle," Hartman said.

Hartman said one graduate student and two postdoctoral students were among the people injured in the explosion. Both the fire department and the University of Missouri Police Department declined the release their names, referring reporters to the university. MU spokesman Christian Basi said he did not have the names and didn't know when they would be made available.

Hartman said the number of injuries was "certainly reduced" because of MU being on summer break, which meant fewer people working in the facility.

The lab belongs to MU biochemistry professor Judy Wall, Basi said. Wall could not be reached for comment.

Wall's lab was used for experiments with bacteria. Hartman said he was unsure whether the 2,000 psi hydrogen tank was being used at the time of the explosion. He said the department is taking precautions against any potentially hazardous chemicals.

He said the ceiling in the lab collapsed but that the building remained structurally sound.

After the explosion, the building was evacuated, and Hartman said the fire was contained in about 10 minutes. Fire crews then began working to ventilate chemicals. The fire alarm was triggered and the building's fire sprinklers activated, extinguishing most of the fire, Hartman said in a release.

The building's central staff were allowed to re-enter the building, Hartman said at around 4:15 p.m.

Seventeen windows were blown out in the third-floor explosion. The room's number was not yet available.

Phil Leibu was working in the basement of Schweitzer Hall when he heard an explosion and saw debris falling on the ground through his window.

"I didn't really look. I thought it was something with a truck," she said, citing the heavy roadwork on campus.

She received an e-mail alert about the explosion and went outside to see what was going on. Several small groups of people were watching the scene while the fire department was investigating, she said.

There was significant damage to the building with glass and debris falling to the ground, Hartman said. All the windows on one corner of the building were broken.

Basi said no one other than the fire department would be allowed to access the lab until further notice, and cleanup in the lab would start later Monday night.

Explosions in anaerobic chambers are not unprecedented, according to a research paper written by Mike Cox of Anaerobe Systems in San Jose, Calif.

Cox — who previously experienced two small anaerobic chamber explosions — wrote that when a chamber is transitioning to an oxygen-free state, specific combinations of oxygen and hydrogen can become flammable, making an explosion possible if something ignites the gas.

MU is expected to investigate the explosion and take steps to avoid a future incident, the fire department said in its release.

The Columbia Daily Tribune
Four people were injured Monday after gas from a 2,000-psi hydrogen tank ignited on the third floor of Schweitzer Hall on the University of Missouri campus. Columbia fire investigators said Monday night that the explosion was caused by "human error" during an experiment in a biochemistry lab.

The Columbia Fire Department responded to the building at 503 S. College Ave. at 2:20 p.m. for a report of a structure fire. When they arrived, they saw signs of an explosion, Capt. Eric Hartman said.

"Glass and debris from the third floor Biochemistry Lab had rained down onto the sidewalk, courtyard, and driveway to the building," Hartman said in a statement released at 10 p.m. Monday. Seventeen third-story windows were blown out.

Crews went up to the lab and found a small fire, which they quickly extinguished. "Most of the fire had been extinguished by the automatic sprinkler system which had been activated by the explosion," the statement said.

Fire crews found four injured victims. One had life-threatening injuries, two had moderate injuries and one had minor injuries. Among them were two post-doctoral students and one graduate student. The fourth person, who was working with the lab's hood, suffered the life-threatening injury. Hartman said as of Monday night he was unsure if that person was faculty or a student.

All four were transported to University Hospital. Their injuries ranged from "impact" and "shrapnel" type injuries to burns and respiratory distress, the statement said.

As of 10 p.m. Monday, three of the victims had been released from the hospital. The fourth was admitted to the burn unit, and his or her condition was upgraded to "good," the statement said.

Hartman said the hydrogen tank is intact. Columbia fire investigators determined the cause of the explosion to be "human error during an experimental process."

"Lab personnel turned on the hydrogen tank supply to an anaerobic hood, and due to not being familiar with the warning systems designed to alert them when the hydrogen level was approaching explosive limits, the gas was left on," the statement said. "Once the gas reached an ignition source, it ignited and the explosion occurred."

Hartman said the University of Missouri is conducting additional investigations "to determine what additional steps should be taken to avoid a similar incident." He said the university will be releasing the victims' names.

The lab was used by Professor Judy Wall, MU spokeswoman Mary Jo Banken confirmed this afternoon. Wall was in her office across from the lab and was not injured in the blast.

Schweitzer Hall is home to the Department of Biochemistry, which is part of the School of Medicine and the College of Agriculture, Food and Natural Resources.

Built in 1912, the building is named after Paul Schweitzer, the first full-time professor of Chemistry and the chairman of the Department of Agricultural Chemistry, according to the MU website.


Lab explosion at the University of Missouri in Columbia, Missouri
Posted by Mercury at 8:00 AM