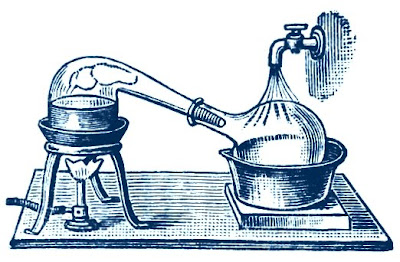 Yes, NOVA [ "Newton's Dark Secrets"--transcript ] had a special [highly dramatized] program on Newton and his interest in alchemy.

Indiana University
Sir Isaac Newton, an icon of scientific revelation, led a secret life as a scholar of the mysterious art of alchemy. For the last six years, William Newman has been exploring that hidden life and bringing it to light. Newman is Distinguished Professor of history and philosophy of science in the College of Arts and Sciences at Indiana University Bloomington.

Alchemy, a 17th-century discipline that sought to change metals into gold and discover an elixir of life, among other things, was often called "chymistry" in its time. Newman produces "The Chymistry of Isaac Newton," an interdisciplinary project that provides new research on Newton's chymistry career. Newman's project is supported by the National Science Foundation and the National Endowment for the Humanities.

"The Chymistry of Isaac Newton" project team has just announced the release of 23 edited alchemical manuscripts written by Isaac Newton. This is the first time these documents have been released to the public.

"The Chymistry of Isaac Newton" website, at http://webapp1.dlib.indiana.edu/newton/ , also now details how Newton's optical discoveries, which radically transformed millenia-old theories of light and color, interacted with his alchemy. Manuscripts written by Newton reveal that Newton's analysis and synthesis of white light by means of prisms owe an unsuspected debt to his chymistry.

"Newton was a committed alchemist for 30 years," Newman said, "but he kept his activities in this realm largely hidden from his contemporaries and colleagues, so his alchemical work has been imperfectly known."

Newman and project members translated, edited and explicated the manuscripts, which include laboratory notebooks and other documents. The edited manuscripts are fully word-searchable, and the project website combines the edited texts with laboratory replications of Newton's experiments.

Thanks in large part to Newman's efforts, which have been widely featured in places such as Nova and the BBC, Newton's involvement in alchemy is becoming more widely understood.

"'The Chymistry of Isaac Newton' provides not only a unique window into the mind of a creative genius, but also reveals the full breadth of the material culture and technology of the 'chymistry' upon which Newton drew," says Newman.

The project's ultimate goal is to provide complete annotations for Newton's manuscripts and comprehensive interactive tools for working with the texts. To date, more than 600 pages have been edited and are available online, including Newton's most complete laboratory notebook, Portsmouth Collection Add. MS. 3975, found at Cambridge University.

Visitors to the site may also search for Newton's graphic alchemical symbols, some of which represent exotic formulas such as "the Green Lyon," "the Star Regulus of Antimony," and "the Caducean Rod of Mercury." These symbols were the common stock of early modern alchemy, and Newton made full use of them.

Newman and his collaborators have replicated alchemical processes taken from Newton's "Dictionary of Alchemical Terms." Using a primitive charcoal-burning furnace and modern reproductions of period glassware, project members manufactured "oil of vitriol" (sulfuric acid), "aqua fortis" (mostly nitric acid), and "spirit of salt" (hydrochloric acid). These experiments, carried out with the cooperation of the Department of Chemistry at IU Bloomington, are documented with photographs on the project website.

Partners in "The Chymistry of Isaac Newton" project include the IU Digital Library Program, the Institute for Digital Arts and Humanities, the School of Library and Information Science, and the Chemistry and History and Philosophy of Science departments at IU Bloomington.

For more information on The Chymistry of Isaac Newton project, see http://webapp1.dlib.indiana.edu/newton/.
Posted by Mercury at 5:26 AM