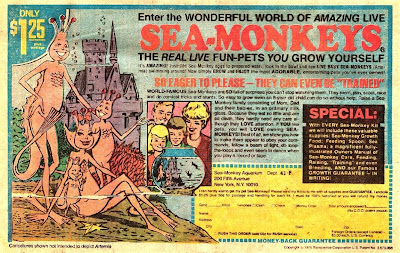 A family of tiny Sea Monkeys were the stars of the show at Bozeman, Montana's Astronomy Day, where the tiny "aliens" helped people learn about astrobiology.

PRLog
A tankful of tiny Sea Monkeys were the stars of the show at an Astronomy Day event held in Bozeman, Montana on April 24.

The centimeter-long creatures, long the staple of old-school comic book ads, twirled and whirled underwater as kids and adults alike kneeled down for a look. The Sea Monkeys were part of an astrobiology exhibit hosted by Montana State University’s Astrobiology Biogeocatalysis Research Center (ABRC), and the creatures helped spark the conversation about “alien” life.

“If we find alien life on another planet, they probably won’t look like the little green men in movies. They’re much more likely to look like this!” said MSU Outreach Specialist Jamie Cornish, as she pointed out the Sea Monkeys’ long tails and three eyes.

Sea Monkeys (which are actually a species of brine shrimp) are hardy creatures that have a long track record in space. Cornish said they have flown on the Space Shuttle Discovery, Space Shuttle Endeavour, the USML-1 Columbia, the Space Shuttle Atlantis and the Mir Space Station. Their eggs were placed outside a space vehicle and exposed to the full radiation of the Sun. Upon returning to earth, the eggs still hatched.

Cornish told Astronomy Day visitors that astrobiologists at Montana State University study similarly hardy micro-organisms that live in the acidic hot springs of nearby Yellowstone National Park. By knowing more about organisms that thrive in “extreme environments” like Yellowstone’s hot springs, scientists will have a better understanding of what life forms might survive on planets like Mars or moons like Jupiter’s Europa.

About 1,400 people attended the 2010 Astronomy Day, held at Bozeman’s Museum of the Rockies. Other activities included a presentation by NASA astronaut and native Montanan Loren Acton; dramatic images of the Sun recently released from the Solar Dynamics Observatory; and a touch-screen kiosk from the MESSENGER mission to Mercury. Visitors received outreach materials from the Kepler and SOFIA missions provided by SETI; astrobiology posters and planet cards from NAI Central; and Titan bookmarks and other educational pieces from the Jet Propulsion Laboratory.

Sea-Monkeys [Wikipedia]
Posted by Mercury at 11:03 AM