Thrill seekers to be restricted? 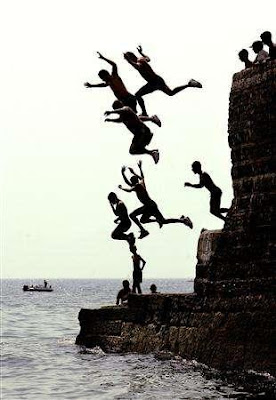 "Should There Be Age Limits on Thrill Seeking?"

Time
Since her circumnavigation attempt ended in a dramatic search-and-rescue mission more than a week ago, 16-year-old Abby Sunderland has become the center of a debate over whether to put limits on adventure. In late January, the California teen set sail from her home state in hopes of becoming the youngest person to sail around the world alone, but she lost contact with her family on June 10 after reporting encounters with waves up to 30 ft. tall. A broken mast forced Sunderland to abandon her attempt — along with her boat — during an emergency rescue that took place two days later. Now reunited with her family, she faces an entirely different kind of storm. Her brush with peril has ignited concern about the dangers of world-record attempts by minors and raises the question, How young is too young when it comes to dangerous quests?

As with any debate over age, the answer depends on, well, how old you happen to be. "Though there are a lot of individual differences among maturity in children, I would say, on the average, they would not be adequately prepared to make the kind of decision to engage in life-threatening activities," says Jack Lesyk, director of the Ohio Center for Sport Psychology. "I think one could easily confuse intellectual maturation with emotional maturation." In the midst of the criticism, Sunderland has taken up her own defense of the trip, which she says was cut short simply because of bad weather. "There are plenty of things people can think of to blame for my situation; my age, the time of year and many more," she recently wrote on her blog. "The truth is, I was in a storm and you don't sail through the Indian Ocean without getting in at least one storm. As for age, since when does age create gigantic waves and storms?"

But this hasn't stopped some from hammering "You must be this tall to ride this ride" signs into the world-record landscape. "As a standard policy, Guinness World Records does not sanction, endorse or encourage attempts by people under the age of 16 on records which are dangerous or potentially life-threatening," says Guinness spokeswoman Sara Wilcox.

And it doesn't stop at endorsements. World-record organizations — Guinness included — are beginning to ban official recognition of the titles outright. The World Sailing Speed Record Council (WSSRC), the official body of recognition for world sailing titles, discontinued its "youngest" category after 18-year-old Jesse Martin claimed the title in 1999. "We concentrate on speed record attempts and claims and no longer recognize "human condition" categories which can expand to such an extent that almost anyone would be able to claim a record of some sort," WSSRC secretary John Reed said in a statement to TIME. The decision prompted Guinness to follow suit. "The WSSRC no longer monitors or recognizes a youngest-sailor record, and neither do we," Wilcox says. She also notes that the organization means to be "careful" with the issue because of "the possibility of parents encouraging or forcing their children to do something for the sake of a record."

Courts have begun to step in against "risky" world-record chasing. In 2009, Laura Dekker, a 13-year-old from Holland, was denied a solo circumnavigation attempt by family courts because of the presumed danger inherent in the attempt. Dekker, whose parents (now divorced) were also sailors, was made a ward of the state after government officials got word through the media of her plans for a solo sail around the world. (Her father supported her trip. Her mother did not.) In 1996, 7-year-old Jessica Dubroff died as she attempted to become the youngest person to pilot a plane across America, leading Congress to quickly pass the Child Pilot Safety Act, a bill banning record-setting attempts by unlicensed pilots. "When I first heard reports of this accident, I could not believe that a child of this age was actually flying this plane," said Congressman John Duncan, a Tennessee Republican, during a hearing just two weeks after Dubroff's death. "In fact, I thought then and still think today that it was criminal that two adults actually decided to let this plane take off under those conditions."

Realistically, there's a sizable difference between a 7-year-old and a 16-year-old, but as record seeking continues, it's reasonable to imagine the participants trending younger and younger. Still, without an official rubric, is it safe to assume that physical and emotional maturity equate? Frank Farley, a Temple University psychologist, says a teen's physical and emotional maturity levels can be determined only on a case-by-case basis. "We should not bind people by age. It's ageism," he says. "When somebody runs a study and claims that kids of age 13 can't do such and such, they're wrong. We don't have a 12-inch ruler of maturity." Farley, an expert on risk-taking behavior, urges people to consider the adventurous lifestyle of the small percentage of capable teens. "It's a tacit knowledge," he says. "A culture of adventure will provide these kids with advanced know-how to make decisions in dangerous situations." Such was the case with Sunderland, whose older brother, 17-year-old Zac Sunderland, circumnavigated the world just last year, sailing from Marina del Rey, Calif., and returning a little more than 13 months later.

Farley, in defense of what he calls the naturally adventurous human spirit, even goes so far as to say that the issue is more a fundamental by-product of our complicated relationship with youth than a fear for the safety of risk-taking teens. "We've extended childhood incredibly long," he says. "We talk about young adulthood as just being another follow-up to the teenage years. We've got some kids in their 20s who aren't getting out there. It's overparenting." Overparenting or no, studies have shown that most teenagers are not emotionally capable of handling the extremely stressful situations that are inevitably a part of these dangerous attempts. A 2008 Harvard Medical School study on teen brain development points out that while adolescent brains contain a level of cellular excitement that enables them to acquire some skills (such as learning languages or musical instruments) more easily than adults, this overzealous firing of neurons could make teens more vulnerable to external stressors, inhibiting reasoning or judgment.

But to Farley, a teen in the position of potentially setting a world record can't always be compared to the average test subject. "Not everybody conforms to the mean," he says. "If you generalize about the average, that cuts out possibilities about those who are not average." Without a clear litmus test for teen record breakers, it seems that the default position will be to stop them from ever trying at all.

Enter "Abby Sunderland" in the blog's search engine for more.
Posted by Mercury at 4:57 PM