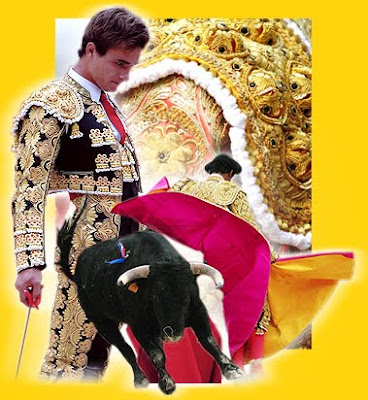 This is extreme, involving an elected form of danger unlike self-preservation and bellicose aggression in times of armed conflict. Nevertheless, it does involve Hemingway's "grace under pressure". It's difficult to be "cool" in dangerous situations. This is not a matter of being "chicken" or cowardly, but realizing one's limits...more like a Grecian philosophy.

"Terrified Mexican matador: 'I didn't have the balls'"

guardian.co.uk
Matador Christian Hernandez, bedecked in traditional livery and bearing a customary red cape, narrowed his eyes as the bull lowered its head.

What happened next was slightly less orthodox, as the 22-year-old turned on his heels and fled the onrushing bovid, explaining later "this is not my thing".

After reaching, and vaulting, the perimeter wall at Sunday's botched bullfight at the Plaza Mexico in Mexico City – to cries of derision from the crowd – Hernandez was arrested for breach of contract, local media reported yesterday. He was later released after paying a fine.

"There are some things you must be aware of about yourself," the 22-year-old Mexican matador said in a television interview.

In a sight rarely seen in the bravado world of bullfighting, Hernandez made a spin with his red cape at the charging bull, then ran across the ring and leapt headlong over the wall to safety, dropping the cape in the process.

Hernandez had been gored in the leg by a different bull several months prior to Sunday's antics.

Officials did briefly convince Hernandez to return to the ring on Sunday, whereupon the matador put his hands over his head and pointed upward before making a second exit, shaking his head.

Hernandez later announced his retirement from bullfighting.
Posted by Mercury at 5:51 AM