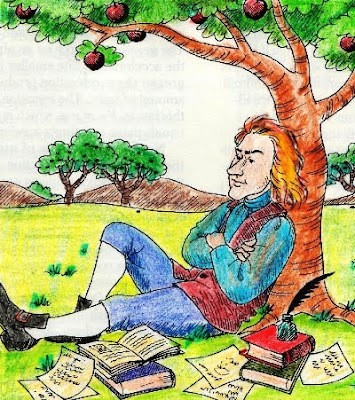 "Isaac Newton and Physics for Kids"

Wired
A lot of nonfiction for kids in upper elementary and middle school is what I think of as “book report books.” They’re packed with facts, but not presented in a way that makes them very interesting. They may consist of pages of dense text, sound like they were written for a thesis, not a kids book, or just give the impression that the author wasn’t really interested in the topic.

So when I discovered the Chicago Review Press series of activity books I was ecstatic. They’re full of information, yes, but also cleanly laid out with plenty of photos and images. They’re written with an enthusiasm for the subject that’s catching. And they give readers activity ideas that help them absorb and build on the material they’re reading and learning about.

This year I asked Chicago Review for a review copy of their book Isaac Newton and Physics for Kids. Even though my kids are beyond the target age, I thought it might be a useful reference for our physics homeschool studies this year. (Tip to homeschooling parents: If you want to bone up quickly on a topic, try reading a high-quality middle-grade book. Most times you’ll get all the information you need to get started, without overwhelming amounts of detail.) What I found was an excellent biography on Newton that touched on his physics discoveries but didn’t really focus on them. Nonetheless, it is an excellent book for those who want to read about this eccentric and brilliant thinker.

Newton’s interests, of course, went far beyond the Laws of Motion. He started as a farmer’s son but his academic abilities landed him at Cambridge. There he developed calculus (for which generations of high school students have cursed him ever since). As a young professor, he began to study how light travels, and refined the telescope. And of course he also famously described the true nature of gravity. But he also secretly dabbled in alchemy, and worried deeply about religious matters. Isaac Newton and Physics for Kids puts Newton’s life story into context, describing the social and scientific environment in which he developed and matured.

The activities in the book reflect this broader view of Newton’s life, only touching on the physics experiments briefly. The demonstrations of Newton’s Three Laws of Motion are standard fare: pulling a card out from under a coin (similar to the tablecloth trick, but less dramatic), powering a model boat by letting the air out of a balloon. Other activities illustrate Galileo’s pendulum findings and show you how to get the same effect as a prism with a mirror and a pan of water. There’s even a version of the crystal garden chemistry project I featured on GeekDad a while back (although the book’s grows much slower than mine). But some of the projects — make a candle clock, bake an apple pie — don’t really have much to do with physics or with Newton himself.

Still, if learning about society during Newton’s time interests you as much as the man’s scientific discoveries, Isaac Newton and Physics for Kids is a worthy addition to the Chicago Review Press “For Kids” series. 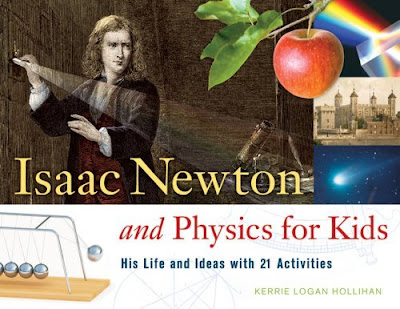 Isaac Newton and Physics for Kids