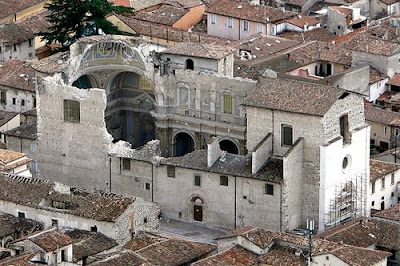 Scientists are not infallible and just as culpable for errors as anyone else. A revered status is not immune to review and judgment.

Space & Earth
Six of Italy's top seismologists are being investigated for manslaughter for not warning the city of L'Aquila about an earthquake that struck on April 6, 2009. The magnitude-6.3 earthquake caused 308 deaths and 1600 injuries, and left more than 65,000 people homeless.

The L’Aquila public prosecutor’s office issued the indictments on June 3, a step that usually precedes a request for a court trial. The investigation originated when about 30 L’Aquila citizens registered an official complaint that the scientists had failed to recognize the danger of the earthquake during the days and weeks in advance.

In the six months leading up to the earthquake, a series of smaller seismic movements and tremors were recorded nearby, including a magnitude-4.0 earthquake on March 30. On March 31, six days before the large earthquake struck, Italy’s Civil Protection Agency held a meeting with the Major Risks Committee - composed of the six scientists - to assess the risk of a major earthquake. At that time, the committee concluded that there was "no reason to suppose a sequence of small earthquakes could be the prelude to a strong event" and that “a major earthquake in the area is unlikely but cannot be ruled out."

At a press conference after the meeting, government official Bernardo De Bernardinis, deputy technical head of the Civil Protection Agency, told reporters that "the scientific community tells us there is no danger, because there is an ongoing discharge of energy. The situation looks favorable.” In addition to the six scientists, De Bernardinis is also under investigation.

According to the group of local citizens, many of the earthquake’s victims had been planning to leave their homes, but had changed their minds after the committee’s statements.

Minutes from the March 31 meeting show that the scientists recommended that buildings in the area should be monitored to assess their ability to handle a major shock.

Although the scientists are unable to comment due to the investigation, an article in Nature News reported that one of the scientists, Enzo Boschi, president of the National Institute for Geophysics and Vulcanology (INGV) in Rome, wrote in a letter last September that the meeting was too short and that he had not been informed about the following press conference. Only one of the seismologists from the committee, Franco Barberi, a volcanologist at the University of Roma Tre, was at the press conference.

Susah Hough, a geophysicist at the US Geological Survey in Pasadena, California, who is not involved in the investigation, also disagrees with some of the remarks from the press conference. "The idea that minor earthquakes release energy and thus make things better is a common misperception,” she said. “But seismologists know it's not true. I doubt any scientist could have said that."

The article in Nature News lists the six scientists and officials under investigation for manslaughter as Boschi; Barberi; Giulio Selvaggi, director of the National Earthquake Center based at INGV; Claudio Eva, a professor of earth physics at the University of Genoa; Mauro Dolce, head of the seismic risk office in the Civil Protection Agency; and Gian Michele Calvi, director of the European Centre for Training and Research in Earthquake Engineering in Pavia.

Coming to the defense of the seismologists, nearly 4,000 scientists from around the world have signed a letter to Italy's president, Giorgio Napolitano, urging him to focus on earthquake preparation rather than holding scientists responsible for something that they cannot do - predict earthquakes.

"The proven and effective way of protecting populations is by enforcing strict building codes," said Barry Parsons of the University of Oxford, who signed the letter. "Scientists are often asked the wrong question, which is 'when will the next earthquake hit?' The right question is 'how do we make sure it won't kill so many people when it hits?'"
Posted by Mercury at 5:56 AM

the ability to predict earthquakes as of now is impossible....as the article states...be prepared but this lawsuit is just more citizen B.S. and nothing else