Being "green" makes some see "red" 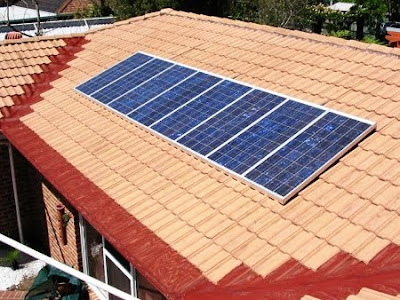 Newport Beach residents say the panels on a hillside home are reflecting too much sunlight and want them moved to the roof. The owners say that the panels are staying.

Los Angeles Times
Stephen and Mashid Rizzone long planned on creating a fully "green" dream home and impart a legacy of environmental responsibility to their children.

Toward that end, 168 solar panels were installed in May on the back of the Rizzones' hillside Newport Beach home, facing the northeast side of Balboa Island. And although the panels may indeed be environmentally responsible, they are also imparting a lot of glare on the island neighbors.

"I'm all for going green, and I'm not trying to stop anyone from having solar panels," said Bob Olson, who says the porch of his Balboa Island home is now subjected to an intense glare for 2 1/2 hours a day because of the Rizzones' solar panels. "What I don't understand is why in the world they didn't put the panels on the roof, where it would be more fitting with the look of the community."

So Olson is organizing a coalition of homeowners to take action against the project, starting with a petition to have the panels moved to the Rizzones' rooftop.

"We are certainly concerned about our neighbors, and we have tried to respond to all concerns as best we can," Stephen Rizzone said. "We have made every effort to comply with all laws and regulations. The project is fully permitted and approved by the city."

And the solar panels, he said, are here to stay.The glass covering the Rizzones' solar panels is treated to decrease glare, said Rita Edwards, marketing manager for Northern California-based Premier Power Renewable Energy, which installed the panels and has used the same tempered glass coverings on other projects with success.

Olson, who designed and had a hand in building his Balboa Island home in 2005, said he planned his residence with the intention of preserving the "village look" of the neighborhood.

"Every detail, from the materials used on the roof door to the color of my front door, was kept in mind with respect of my neighbors and their homes," Olson said.

In the past, homeowners associations have prevented residents from making changes that would disrupt the established look of a neighborhood. But under the California Solar Rights Act, homeowners groups and local governments are prohibited from denying permits or otherwise preventing the installation of solar panels based on aesthetics.

Still, Olson believes he has found an answer by applying a 2004 amendment, Assembly Bill 2473, which allows for the relocation of solar panels as long as moving them does not cost more than 20% of the total project or lower its efficiency by 20%.

Olson said lawyers he has consulted agree with his interpretation of the amendment. He has yet to hire an attorney, however. It's also unclear whether the amendment applies to projects that have already been completed.

Stephen Rizzone said landscapers are planting trees on the hill to soften the look of the panels and he is confident that neighbors will be more comfortable once they see the finished look.

"The posts are planted 22 feet into the ground and surrounded by cement," Rizzone said of the solar panel project. "It's in and it's not going anywhere."
Posted by Mercury at 4:36 AM