Archimedes' "burning mirror"...now thought to be just a "steam cannon" 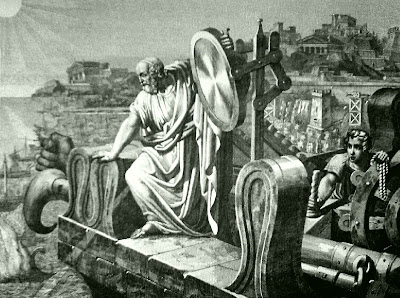 I would rather to think of it as a "death ray".

Archemedes' burning mirror, a device that was thought to concentrate the sun's rays into a laser beam that repelled an invading Roman fleet in 212 BC, was more likely a steam cannon, new research suggests.

The Christian Science Monitor
Greek inventor Archimedes is said to have used mirrors to burn ships of an attacking Roman fleet. But new research suggests he may have used steam cannons and fiery cannonballs instead.

A legend begun in the Medieval Ages tells of how Archimedes used mirrors to concentrate sunlight as a defensive weapon during the siege of Syracuse, then a Greek colony on the island of Sicily, from 214 to 212 B.C. No contemporary Roman or Greek accounts tell of such a mirror device, however.

Both engineering calculations and historical evidence support use of steam cannons as "much more reasonable than the use of burning mirrors," said Cesare Rossi, a mechanical engineer at the University of Naples "Federico II," in Naples, Italy, who along with colleagues analyzed evidence of both potential weapons.

The steam cannons could have fired hollow balls made of clay and filled with something similar to an incendiary chemical mixture known as Greek fire in order to set Roman ships ablaze. A heated cannon barrel would have converted barely more than a tenth of a cup of water (30 grams) into enough steam to hurl the projectiles.

Italian inventor Leonardo da Vinci sketched a steam cannon in the late 15th century, which he credited to Archimedes, and several other historical accounts mention the device in connection with Archimedes.

Indirect evidence for the steam cannon also comes from the Greek-Roman historian Plutarch, who tells of a pole-shaped device that forced besieging Roman soldiers to flee at one point from the walls of Syracuse.

Rossi calculated that such cannons could have fired a cannonball weighing roughly 13 pounds (6 kilograms) at speeds of roughly 134 miles per hour (60 meters per second). That allowed the cannons to possibly target troops or ships at distances of approximately 492 feet (150 m) while firing at a fairly flat trajectory to make aiming easier.

"As far as I know, it is the first paper about that use of a steam cannon by Archimedes," Rossi told LiveScience.

Past investigations by Greek engineer Joannis Stakas and Evanghelos Stamatis, a historian, showed that a parabolic mirror can set small, stationary wooden ships on fire. MIT researchers carried out a similar demonstration more than three decades later in 2005.

But whether mirrors could have maintained a constantly changing curvature to keep the right burning focus on moving ships seems doubtful, Rossi noted. He added that ancient sailors could have easily put out any fires that started from a slow-burning mirror.

By contrast, Greek fire emerged in many historical accounts as a deadly threat for ancient warships. The unknown chemical mixture reportedly burned underwater, and saw most use by the Byzantine Empire that dominated the Eastern Mediterranean starting in A.D. 330. Other records mention earlier versions of the burning mixture.

The steam cannons only represent the latest historical investigation by Rossi. He previously coauthored the book "Ancient Engineers’ Inventions: Precursors of the Present" (Springer, 2009), along with military historians Flavio Russo and Ferruccio Russo.

The trio plan to meet up with other historians in the future and possibly reconstruct versions of the ancient weapons. Flavio previously built several working reconstructions of ancient Roman artillery weapons, and Ferruccio specializes in 3-D virtual reconstructions of mechanical devices.

Some of Rossi's other work looked at ancient motors that may have moved siege towers used by the Greeks and Romans. The likeliest motors may have relied on counterweights, and emerged in records as the invention of Heron of Alexandria in the first century.

Such devices could have been placed inside the protection of the towers themselves, Rossi noted. He pointed to an account by the Roman general Julius Caesar, who told of using such towers against a town defended by Gallic tribes in modern-day France. The sight of towers appearing to move by themselves frightened the defenders into negotiating for surrender.

A research paper on the siege towers was presented alongside Rossi's recent work entitled "Archimedes' Cannons against the Roman Fleet?" at the International World Conference held in Syracuse, Italy from June 8-10. The conference proceedings appear in a book titled "The Genius of Archimedes -- 23 Centuries of Influence on Mathematics, Science and Engineering" (Springer, 2010).

In the end, the engineering talents of Archimedes did not save him from death when the Romans finally stormed Syracuse. But at least a love of history among Rossi and his colleagues may lead to the resurrection of some of his ancient devices.
Posted by Mercury at 10:40 AM