Perils of the "mom and pop" toy stores and lead 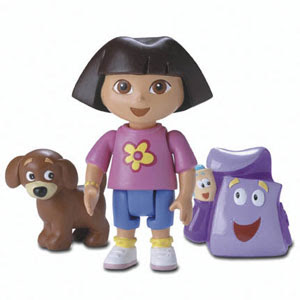 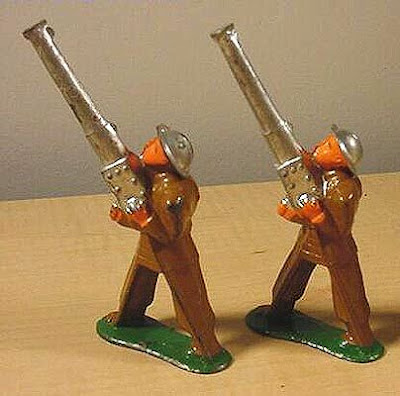 Somehow, I don't appear to have been affected by the soldiers but then, maybe that's why my generation is so goofy. [We were also the same generation that made silver coins shine when dipped in mercury.]

"Lead testing can be costly for mom and pop toy shops"

When other toy retailers and manufacturers were feeling a backlash against their made-in-China products in late 2007, Randy Hertzler was riding high. He imports and sells only European-made toys, which, like those made in the U.S., were all the rage when recalls of toys with lead paint dominated the news.

The tide has turned against Hertzler, however. He can't afford to do the testing that larger chains can to meet the sweeping child-safety law enacted in response to the recalls. And the companies he buys from have stopped selling him about a quarter of the products they used to, because of costs.

"Now Mattel is testing and making toys without any trouble at all, and those of us who were never the problem are in danger of losing our businesses," says Hertzler, who runs EuroSource, based in Lancaster, Pa., with his wife and two sons.

Nearly two years after the safety law was enacted, Congress and the Consumer Product Safety Commission are still struggling to reduce its burden on small businesses while eliminating the risk of lead and phthalates in children's products. The law limits lead in products intended for children and requires third-party testing for certification. It also requires testing to prove products are free of phthalates, chemicals found in plastics that may harm the hormonal system.

Many small manufacturers say the testing is cost-prohibitive. But its proponents say the Consumer Product Safety Improvement Act of 2008 was long overdue, as the U.S. has been far behind Europe in addressing lead and has been slow to recognize the effects even very low levels can have on children's IQs.

A coalition of small businesses and manufacturers, the Alliance for Children's Product Safety, has been aggressively fighting the law, saying it is threatening the livelihoods of mom and pop shops like Hertzler's and costing larger manufacturers billions in lost sales and compliance. The efforts have had some results, but the alliance is far from satisfied. For example, CPSC delayed enforcement of stringent new testing until February 2011, but the group says most retail chains are already requiring the testing.

House Energy and Commerce Committee Chairman Henry Waxman, D-Calif., has drafted legislation to exempt most children's clothing and some products sold by thrift stores and allow less costly testing methods for very small manufacturers. In a written response to questions, Waxman said the measure would "grant significant and meaningful relief to many businesses while still protecting our children from dangerous products" but "does not represent a full satisfaction of anyone's wish list."

The American Academy of Pediatrics and the Center for Environmental Health say drastic changes were needed for U.S. laws to catch up with the research and to recognize the extent of the lead problem. And some advocates of the law question whether it's nearly as burdensome as suggested.

Helen Binns, a pediatrician, professor and chair of the academy's environmental health committee, says it's only recently become accepted that low levels of lead exposure have a proportionally higher impact than larger amounts. "The research keeps moving ahead and pointing us to the fact that to protect children, we have to take some new stances on what's safe and what isn't."

As early as 1996, the Center for Environmental Health was finding lead in everything from diaper cream to women's handbags and filing lawsuits against the companies that sold and made them.

"Every time we would find lead in some new kids' products, we'd get hundreds of calls from parents asking, 'Why do I have to worry about lead in this? Isn't stuff on shelves safe?' " says Center spokesman Charles Margulis. "We were making up the standards by our lawsuits. It was a terrible way to do it."

Margulis says every time the group would bring a case, businesses would say prices would go up and that they might have to close their doors. California environmental laws require hefty fines — as much as $2,500 a day per violation for each product — and Margulis says to avoid fines, "In every single case, companies changed the way they did business, and the price of the product didn't go up."

The Alliance for Children's Product Safety releases what it calls a CPSIA "casualty of the week" underscoring the effect the law has had on businesses. Among the recent victims: Colorado-based American Educational Products reports it is overwhelmed by paperwork related to the law and recently had a $5,000 rock order for a geology lesson canceled because of concerns about CPSIA compliance. Minnesota toy shop The Essence of Nonsense closed its doors because suppliers were limiting what it could sell because of the law.

"What the law should be about is ensuring safe products," says Edward Krenik, a spokesman for the children's product alliance. "We've crossed over into ridiculousness."

CPSC spokesman Scott Wolfson says Chairwoman Inez Tenenbaum believes the "marketplace has made adjustments" and that the law is having positive effects. He notes global suppliers are choosing lead-free buttons for adult and children's clothing, which is safer for everyone and helps shift the burden from small businesses to suppliers up the line. He says Tenenbaum is trying "to find the right balance between compliance and not putting companies out of business."

"You're left with two serious problems: The economy and children's health, and at some point you have to make really hard decisions," Binns says. "I'm just hopeful that some sound minds will prevail."
Posted by Mercury at 6:05 PM

Hi, was browsing the internet for Toy stores and I came across yours. Anyway, toys are vital tools that help foster the mental, physical, emotional and social development of boys and girls. Toys are basic instruments for the development of children’s fantasy, thoughts and creativity.