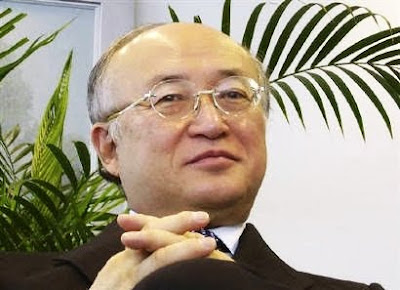 "Nuclear watchdog has personal stake in his job"

Los Angeles Times
He was born two years after the United States dropped atomic weapons on the cities of Hiroshima and Nagasaki at the end of World War II. And like many Japanese of his generation, Yukiya Amano is haunted by the bombings that killed tens of thousands of his countrymen, irradiated two Japanese cities and launched the anxieties of the nuclear era.

"I have a very strong feeling against nuclear weapons," Amano, who was named head of the International Atomic Energy Agency in December, said this month in a rare interview in his Vienna office. "We have the experience of Hiroshima and Nagasaki, and that feeling is very widely shared among the Japanese people, including myself."

A low-key veteran of Japan's diplomatic corps, Amano brings a quiet urgency to his job. He assumes command of the world's top nuclear watchdog agency at a time of heightened concern about proliferation of nuclear weapons in the Middle East and the Korean peninsula, as well as a renewed drive by the Obama administration to reinvigorate long-dormant disarmament efforts.

But Iran's nuclear program remains his agency's No. 1 priority and his biggest challenge. The collapse of two versions of a proposal first floated last year to swap Iran's enriched uranium stockpile for fuel to power a Tehran medical reactor has left the international community with little space for a deal.

"The proposal, as was proposed in October without any change, will not be agreed" upon, the diplomat said.

Amano, a 30-year veteran of Japan's Foreign Ministry, is cut from different cloth. He is cool and cautious, circumscribing his agency's mission with an officiousness that has rankled even some of his Western supporters, who whisper that they would like him to be more personally engaged.

"We have two aspects: nuclear disarmament and nuclear nonproliferation," Amano said. "But both have one common aspect: to be against nuclear weapons."

Amano attends commemorations of Hiroshima and Nagasaki annually and has communicated with the victims of the bombings and their families, who've passed on words of encouragement in his fight against the spread of nuclear weapons.

"The expectations are high," he said.

Though not a nuclear weapons power itself, Japan has one of the world's most advanced atomic research programs. As his nation's longtime envoy to the atomic agency, Amano uses that experience to assess the needs of other countries striving to establish nuclear programs.

"I have good knowledge of nuclear laws, of nuclear power plants, nuclear applications," he said. "It is not only buying the sophisticated equipment. It's training, social acceptance, maintaining, safety. Equipment is a small part of the story."

Some nations are rushing to advance their atomic programs in what is dubbed by specialists as "a nuclear renaissance," prompting fear that a small a number of "virtual nuclear weapons states," such as Japan or Brazil, could quickly turn their peaceful civilian programs into war machines.

Amano dismisses such worries. He divides the world into responsible nuclear states and those that refuse to play by the rules, such as Iran and North Korea.

"Regarding this notion — of virtual nuclear weapons states — there isn't such a concept in the IAEA," he said. "There are those countries which apply fully comprehensive safeguards and other obligations. And there are some other countries that do not."

Israel, India and Pakistan, which are not signatories to the international Nuclear Nonproliferation Treaty, are not subject to the same safeguards as Iran, which is. But there remains a longstanding point of disagreement between the agency and Tehran over those rules, stemming from different interpretations of whether the Islamic Republic is obliged to adhere to a set of additional rules that it signed on to — provisionally, it now says — in 2003.

At the start of last month's meeting of the IAEA Board of Governors, Amano labeled Iran a "special case" because of its refusal to fully implement those additional rules and for defying six United Nations Security Council resolutions calling on it to halt its enrichment of uranium.

"I'm not saying that Iran has a nuclear weapons program," he said. "But there are issues that need clarification. Iran has past activities which were not declared. All of these aspects are specific, special to Iran. We don't find other countries that are in the same situation."

Amano's tough line has angered Iranian officials, who this year began personally denouncing him as a tool of Western powers. Amano fought a tough battle for leadership of the board against the South African diplomat Abdul Samad Minty, who was backed by the developing world, in what many analysts saw as a battle between the nuclear haves and have-nots.

As Amano has singled out Iran, officials in Tehran have targeted Amano, characterizing him as a stooge of the West and criticizing the agency's work as politicized. Iranian officials recently denounced a particular section of his agency's May report as inaccurate and they barred two inspectors, accusing them of lying and leaking information to the press.

Amano maintains that he has good relations with Iranian officials, but he acknowledged that his "inspectors' work in Iran is not easy."
Posted by Mercury at 5:27 AM