Nutty idea from a nutty administration 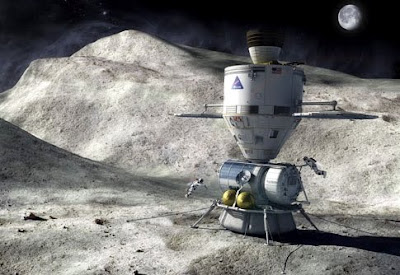 Not a good or feasible idea.

"Obama plan to land on asteroid may be unrealistic for 2025"

USA TODAY
Millions of miles from Earth, two astronauts hover weightlessly next to a giant space rock, selecting pebbles for scientific research. The spaceship where they'll sleep floats just overhead. Beyond it, barely visible in the sky, is a glittering speck. It's Earth.

It sounds like a science-fiction movie, but this surreal scene could, if President Obama has his way, become a reality. However, unlike Hollywood depictions in such movies as Armageddon, it's going to be a lot harder to pull off.

Almost 50 years after President Kennedy proposed sending a man to the moon "before this decade is out," Obama has set an equally improbable goal. He has proposed a 2025 date for NASA to land humans on an asteroid, a ball of rock hurtling around the sun.

If the mission ever gets launched, it would mark a milestone just as significant as Neil Armstrong's "small step" on the moon, experts say. To go to an asteroid, humans would have to venture for the first time into "deep space," where the sun, not the Earth, is the main player.

An asteroid trip "would really be our first step as a species outside the Earth-moon system," says planetary scientist Andy Rivkin of the Applied Physics Laboratory. "This would be taking off the training wheels."

Asteroids have always been passed over as a destination for human explorers. Then-president George H.W. Bush wanted NASA to go to Mars, while his son, George W. Bush, chose the moon. During the past six years, NASA spent $9 billion building a spaceship, rocket and other gear to help reach the second Bush's goal of returning humans to the lunar surface by 2020.

In February, Obama took steps toward killing Bush's moon program, which was beset by technical troubles and money woes. Two months later, in a speech at Cape Canaveral, Obama announced that the astronauts' next stop is an asteroid.

So far, the Obama administration has been quiet on the need for a major sum of money to accomplish his goal. And unlike Kennedy, who used Sputnik to promote the moon mission, Obama doesn't have a geopolitical imperative to justify the goal. Congress is resisting Obama's change of direction, which could delay investment in the program.

If Obama wants to bolster his cause, there's a rationale he could cite: An asteroid could wipe out as many human lives as a nuclear bomb. The dominant scientific theory posits that dinosaurs went extinct because of a direct hit from an asteroid as wide as San Francisco. A space rock big enough to kill thousands slams into Earth every 30,000 years, according to a January report from the National Research Council.

That scenario provided the rationale for asteroid missions in various Hollywood movies, including Armageddon. The 1998 film, which starred Bruce Willis, grossed more than $200 million at box office in the U.S. and more than $500 million worldwide. It went on to be a staple on cable television.

But if Americans think they have an understanding of the challenge of going to an asteroid, they're wrong. "I loved the movie," says Laurie Leshin, a top NASA official who is involved in the early planning stages of an asteroid mission, although "it was completely inaccurate."

Obama's plans for NASA have drawn many opponents, including Armstrong, but their criticism centers on the administration's reliance on private space companies to ferry astronauts to orbit. The goal of an asteroid hasn't been questioned as much.

That doesn't mean it would be easy. Although experts agree it could be done, here are four asteroid-size reasons why life won't imitate art.

Astronauts can't hop on a space shuttle to get there.

In Armageddon, Willis' character and his crew blast off in two modified space shuttles to reach the killer asteroid. But NASA has long planned to retire the shuttles within the next year. And even if they weren't all headed to museums, they're useless as asteroid transporters.

The shuttles were built only to circle Earth, says Dan Adamo, a former mission control engineer who has studied human missions to asteroids. They don't carry the fuel to jump into deep space, and their heat shields aren't designed to withstand the extra-high temperatures of returning from a destination other than the Earth's orbit.

What's needed instead is a giant rocket on the scale of the monstrous Saturn V — taller than Big Ben — that propelled man to the moon in the 1960s and 1970s. Such a project is "a difficult challenge" that will cost in the multiple billions of dollars, says Ray Colladay, a member of NASA's advisory council.

NASA spent more than $52 billion in 2010 dollars to develop and build the Saturn V. Building a 21st-century version can be done but will require a sharp increase in the NASA budget later this decade, some space experts say.

"That's the issue everybody wants to duck right now, because it's uncomfortable to face that," Colladay says.

NASA would also need to build a spaceship where the astronauts can live and store all the oxygen, food and water needed for a long voyage. One option is to launch a small space pod carrying the crew, then, once safely in space, unleash an inflatable habitat, Leshin says.

NASA has little practice with such a blow-up spacecraft.

Willis and company arrive at their target asteroid in a few days, if not a few hours. Admittedly, it's streaking toward Earth at the time. NASA would prefer to go to one before it gets to that stage.

Studies by Adamo, former astronaut Thomas Jones and others show that a round trip to a target asteroid would typically take five to six months. That assumes NASA shoots for one of the 40 or so asteroids that come closest to the Earth's path in the 2020s and 2030s and relies on spacecraft similar to those NASA had designed for Bush's moon mission.

Another problem during the journey — the crew would spend months "cooking" in space radiation, says NASA's Dave Korsmeyer, who has compiled a list of the most accessible asteroids. Shuttle passengers are somewhat screened from such radiation by Earth's magnetic field. Astronauts who leave Earth's orbit have no such protection.

Space radiation raises the risk of cancer and in extreme cases causes nausea and vomiting, says Walter Schimmerling, former program scientist of NASA's space radiation program. The astronauts might need to take drugs to prevent the ill effects of radiation.

Then there's the "prolonged isolation and confinement" that the crew will have to endure, says Jason Kring of Embry-Riddle Aeronautical University. "This crew will be more on their own than any other crew in history."

If there's an emergency halfway into the trip, the astronauts would not be able to get home in a few days, as the Apollo 13 crew did. Instead it would take weeks, if not months.

Humans can't walk or drive on an asteroid.

Once they land on the asteroid "the size of Texas," the heroes of Armageddon run over the spiky terrain, except when they're steering two tank-like vehicles. In reality, even the biggest asteroids have practically no gravity. So anything in contact with the surface could easily drift away.

"You don't land on an asteroid," says former Apollo astronaut Rusty Schweickart, a longtime advocate of asteroid studies. "You pull up to one and dock with it. ... And getting away from it, all you have to do is sneeze and you're gone." He envisions a spaceship hovering next to the asteroid and occasionally firing its thrusters to stay in place.

Astronauts wouldn't walk on an asteroid. They would drift next to it, moving themselves along with their gloved hands.

To keep from floating into space, crewmembers could anchor a network of safety ropes to the asteroid's surface, but "that has its own risks, because we don't understand how strong the surfaces of asteroids are and whether (they) would hold an astronaut in place," says Daniel Scheeres, a planetary scientist at the University of Colorado.

The minimal gravity also means that any dust the astronauts stir up will hang in a suspended cloud for a long time. Because there's no weather on an asteroid, there's no erosion to smooth the dust particles.

"It's all going to stay pretty razor-sharp. ... It's not the most friendly stuff in the universe," Korsmeyer says. Keeping humans safe as they explore an asteroid "is going to be really tricky."

Humanity doesn't hang in the balance.

In Armageddon, NASA must send a crew to an asteroid or life on Earth will be wiped out. "Even the bacteria," says the NASA chief, played by Billy Bob Thornton.

In the real world, that irrefutable motivation is absent. By 2025, Obama's target date, there will have been four presidential elections. Any could result in the mission's cancellation, just as Obama canceled Bush's moon plan. "The politics of this is far more challenging than the engineering," Colladay says.

The Obama administration has promised to increase NASA's budget by $6 billion over the next five years, but priorities may change. The Bush administration, for example, in 2007 cut long-term funding for its own moon program by $1.2 billion.

As the deficit looms larger, "especially as the November elections come along ... I would just not be surprised if enthusiasm for some big human spaceflight mission ends," says Marcia Smith, founder of spacepolicyonline.com.

As it is, the extra $6 billion Obama has promised NASA is inadequate for all the tasks the agency is supposed to tackle, Jones says. "The declaration that we're going to deep space is not matched by budget reality," he says.

Leshin, the NASA official, responds that the agency is embarking on a research program that will lead to new, less costly technologies. The agency will build new spacecraft over a period of many years, so the costs don't pile up all at once, she says.

"If we're making progress toward goals that are exciting and important to the American people, then it should be a sustainable program," Leshin says.

She is optimistic that relatively soon, NASA astronauts will speed toward a rendezvous with an asteroid, and that it will be better than in the movies.

"The first time we send humans beyond the cradle of the Earth-moon system, it's going to be extraordinary," Leshin says. "We will have gone further with humans in space than ever before. It will be an incredible first."
Posted by Mercury at 5:17 AM