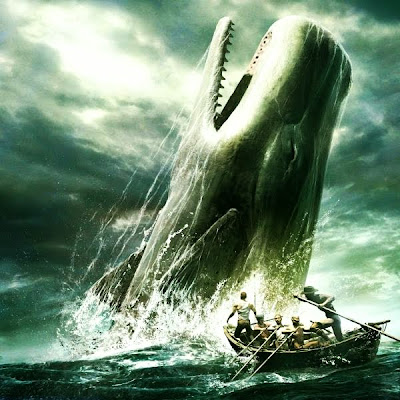 "The Ahab Parallax: ‘Moby Dick’ and the Spill"

The New York Times
A specially outfitted ship ventures into deep ocean waters in search of oil, increasingly difficult to find. Lines of authority aboard the ship become tangled. Ambition outstrips ability. The unpredictable forces of nature rear up, and death and destruction follow in their wake. “Some fell flat on their faces,” an eyewitness reported of the stricken crew. “Through the breach, they heard the waters pour.”

The words could well have been spoken by a survivor of the doomed oil rig Deepwater Horizon, which exploded in the Gulf of Mexico in April, killing 11 men and leading to the largest oil spill in United States history. But they come instead, of course, from that wordy, wayward Manhattanite we know as Ishmael, whose own doomed vessel, the whaler Pequod, sailed only through the pages of “Moby-Dick.”

In the weeks since the rig explosion, parallels between that disaster and the proto-Modernist one imagined by Melville more than a century and a half ago have sometimes been striking — and painfully illuminating as the spill becomes a daily reminder of the limitations, even now, of man’s ability to harness nature for his needs. The novel has served over the years as a remarkably resilient metaphor for everything from atomic power to the invasion of Iraq to the decline of the white race (this from D. H. Lawrence, who helped revive Melville’s reputation). Now, 50 miles off the Louisiana coast, its themes of hubris, destructiveness and relentless pursuit are as telling as ever.

The British petroleum giant BP, which leased the Deepwater Horizon to drill the well, has naturally been cast in the Ahab role, most recently on one of Al Jazeera’s blogs by Nick Spicer, who compared the whaler’s maniacal mission to the dangers of greed, “not just to a man such as Captain Ahab, but to all his crew and to the whole society that supports their round-the-world quest for oil.”

Andrew Delbanco, the director of Columbia University’s American studies program and the author of “Melville: His World and Work,” said, “It’s irresistible to make the analogy between the relentless hunt for whale oil in Melville’s day and for petroleum in ours.” Melville’s story “is certainly, among many other things, a cautionary tale about the terrible cost of exploiting nature for human wants,” he said. “It’s a story about self-destruction visited upon the destroyer — and the apocalyptic vision at the end seems eerily pertinent to today.”

Whaling was the petroleum industry of its day in the 18th and 19th centuries, with hundreds of ships plying the oceans in search of the oil that could be rendered from the world’s largest mammals. The 40-ton bodies of sperm whales could yield dozens of barrels, some derived from blubber and the rest, the most precious kind, spermaceti, from the whale’s head. The oil burned in millions of lamps, served as a machine lubricant and was processed into candles distinguished by their clear, bright flame, with little smoke or odor. In addition, whalebones could be used to stiffen corsets, skin could be cured for leather, and ambergris, the aromatic digestive substance, could be incorporated into perfumes. New England ports, the Houstons of their era, and fortunes were built with whale oil money.

At one point, the United States exported a million gallons a year to Europe, according to Philip Hoare, author of “The Whale: In Search of the Giants of the Sea,” an obsessive disquisition on all matters cetacean, published in March. “The whaler was a kind of pirate-minter — an excavator of oceanic oil, stoking the furnace of the Industrial Revolution as much as any man digging coal out of the earth,” Mr. Hoare writes, adding the observation of the English statesman Edmund Burke to Parliament in 1775 that there was “no sea but what is vexed by” New England harpoons. While other kinds of ships sat nearly dark on the waters when the sun went down, a whaler could look like a floating Chinese lantern, the sailors luxuriating in the light produced by the fuel they carried. “He makes his berth an Aladdin’s lamp, and lays him down in it,” Melville wrote, rhapsodizing about an oil “as sweet as early-grass butter in April.”

But much like the modern petroleum industry — which began in the late 1850s, making it only slightly younger than Melville’s novel — whaling quickly came up against the limits of its resources. Hunting grounds near North America were wiped out by the early 19th century. And the lengths to which ships had to go to continue to find them led to the event that inspired “Moby-Dick,” the sinking in 1820 of the whaling ship Essex, which was rammed by a sperm whale in the South Pacific, more than 10,000 miles from home.

The Essex had headed there to hunt at a whale-rich site discovered only a year earlier. It was called the Offshore Ground, a name suggestive of the highly productive oil site known as Mississippi Canyon, where the Deepwater Horizon was at work when it exploded. Underwater fields like it have made the Gulf of Mexico into the fastest-growing source of oil in the United States, accounting for a third of domestic supplies.

But in the same way whalers had to sail farther and farther for their prey, oil companies are drilling deeper and deeper to tap the gulf’s oil, to levels made possible only by the most advanced technology, operating near its limits. The Coast Guard has warned that this technology has outpaced not only government oversight but — as events have shown — the means of correcting catastrophic failures. An admonition from Nietzsche that Mr. Hoare cites in reference to “Moby-Dick” seems just as pertinent to the spill: “And if thou gaze long into an abyss, the abyss will also gaze into thee.”

Mr. Delbanco cautions, however, against the tendency to read environmentalist moralizing into “Moby-Dick,” as often happens when it is applied to contemporary disasters. Melville did, memorably, wonder whether the whale “must not at last be exterminated from the waters, and the last whale, like the last man, smoke his last pipe.” But one gets the sense that he would have considered the loss a greater one to literature than to the ecosystem. “Even as he recoiled from their blindness and brutality,” Mr. Delbanco said, “Melville celebrated the heroism of the hunters who would stop at nothing to get what human civilization demanded.”

And, indeed, the analogies between the whale and petroleum industries have often been used by conservative economists as an argument against regulation. During the energy crisis of the 1970s, Phil Gramm, later to be a Republican United States senator but then an economics professor at Texas A&M University, made a name for himself by writing about the demise of the whale oil industry, done in by the supply shortage and the interruption of the Civil War, leading to the first energy crisis. The rising price of whale oil, he wrote, created an incentive to find an alternative. It arrived in 1859 when Edwin Drake drilled America’s first oil well, in Pennsylvania, and a process to make kerosene from it was discovered. The unfettered market followed its natural course toward the new fuel, and the crisis ended.

Of course, the spill has now rewritten the script for the debate about how the oil industry should be able to operate and scrambled the political calculus behind President Obama’s plans, announced in March, to open vast new areas to offshore drilling so as to reduce dependence on imports and win backing for climate legislation. The spill, looming as the worst environmental disaster in the country’s history, might in itself be incentive to push the United States more quickly toward new energy sources in the way it once turned to petroleum.

But maybe not. When the leak is finally stanched and the cleanup begins to fade from the news, one wonders whether Melville won’t be there again in his long whiskers and topcoat, offering up his gloomy wisdom.

One of the great underlying themes of “Moby-Dick,” Mr. Delbanco observed, “is that people ashore don’t want to know about the ugly things that go on at sea.”

“We want our comforts but we don’t want to know too much about where they come from or what makes them possible.” He added: “The oil spill in the gulf is a horror, but how many Americans are ready to pay more for oil or for making the public investment required to develop alternative energy? I suspect it’s a question that Melville would be asking of us now.”
Posted by Mercury at 1:37 PM