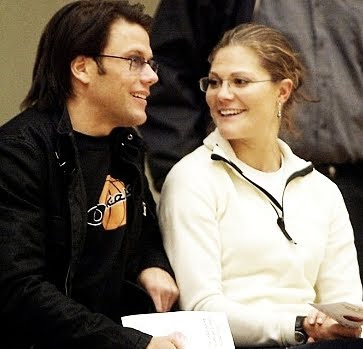 Old ways are hard to justify. Maybe it's time to dump ineffectual monarchs. Are you listening Great Britain?

"Princess Victoria of Sweden's marriage a crossroads for royalty"

The Swedish royal wedding of Crown Princess Victoria and athletic trainer Daniel Westling tests the bounds of progress in the palace – and in Swedish society.

The Christian Science Monitor
He shook like a leaf, she cried like a princess. And so, Swedish Crown Princess Victoria had her prince, a commoner in the guise of handsome gym trainer Daniel Westling.

The Swedish royal wedding at Stockholm Cathedral on Saturday, with 8,000 soldiers and police patrolling rose-draped streets, sealed in matrimony the biggest palace love story since British Prince Charles and Diana tied the knot in 1981.

The 1,000 year-old Swedish royal court hoped to parlay that attention into boosting support for the figurehead monarchy at Kungliga Slottet. Instead, the incessant media coverage of the 8-year relationship between Crown Princess Victoria and now Prince Westling may have backfired, as many Swedes see the pomp and cost as anachronistic – even damaging to a nation politically drawn toward egalitarianism.

"As the media hype reaches its exalted crescendo, Swedes are being forced to take a stand on the issue and many it seems are finding that when pushed they can't stand up for the decidedly unmodern values that all monarchies, constitutional or otherwise, represent, as well as the decidedly irrational arguments used to defend them," writes Peter Vinthagen Simpson in the Swedish newspaper, The Local.

Nonsense, others said. "Congratulations to Crown Princess Victoria & now Prince Daniel of Sweden on their nuptials. Here's to allowing commoners into the gene pool," writes JohnnyGotham on Twitter.

The wedding became an epic date on the royal calendar. Hundreds of dukes, earls, kings, and princesses descended on Stockholm in recent days, many by yacht.

After the wedding, the newlyweds made their way by horse and carriage to a wedding reception hosted by her father, Carl Gustav, whose lineage dates back to when Prince Jean-Baptise Bernadotte of France (renamed Karl Johan) became the monarch in 1810, after Sweden lost the Finnish War in 1809.

The Swedish monarch has no formal state powers, but can – and does – influence the people by the sheer profile of the position.

To be sure, the postmodern fairy tale wedding also took some attention away from some uncomfortable royal scandals, including headlines about Prince Carl Philip, Victoria's brother, who called off a long-time relationship in order to date a reality-TV show star.

Support for retaining the monarchy has dropped to 56 percent from 68 percent since Victoria and Westling began dating in 2002, according to the SOM Institute at the University of Gothenburg, partly perhaps by overexposure in the media and the contrast of palace intrigue against turmoil in the Swedish economy and culture.

The struggle between tradition and modernity came into play in the actual wedding, where Victoria's decision to be escorted to the altar by her father instead of her future husband, as is the Swedish custom, represented to some Swedes a step back for a country proud of its women's liberation movement. So today, Westling took her arm halfway to the altar.

The paparazzi-allure of the relationship failed to impress Swedish poet Thomas Tidholm, who told the Associated Press that, "The royal family is a guarantor of the class society and that is the decisive argument against the monarchy. I actually think this wedding can be counterproductive. It will go on for so long that people will get really fed up."

Princess Victoria and her new prince will probably save the monarchy debate for another day.

Despite grumbling about the $2.6 million cost of the wedding, most Swedes are more likely to embrace the new royal couple – until the next scandal, of course, however small.

“The royals give Sweden political innocence,” Cecilia Åse, the author of "The Power of the Monarchy," tells the Irish Times. “They have no real impact on society and that keeps them popular.”
Posted by Mercury at 5:05 AM