Three fortunate students and a spectacular re-entry of Hayabusa 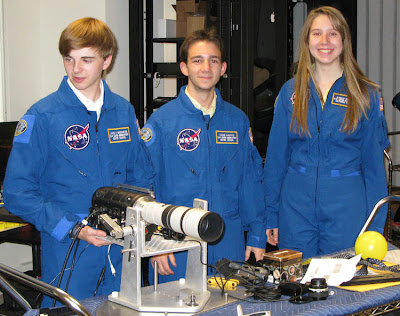 James Breitmeyer, Yiannis Karavas, and Brigitte Berman during their training for recording the reentry of Hayabusa.
"Students Record Spellbinding Video of Disintegrating Spacecraft"

NASA
Last year, high school science teacher Ron Dantowitz of Brookline, Mass., played a clever trick on three of his best students. He asked them to plan a hypothetical mission to fly onboard a NASA DC-8 aircraft and observe a spacecraft disintegrate as it came screaming into Earth's atmosphere. How would they record the event? What could they learn?

For 6 months, they worked hard on their assignment, never suspecting the surprise Dantowitz had in store.

On March 12th, he stunned them with the news: "The mission is real, and you're going along for the ride."

In early June, Dantowitz and the teenagers traveled halfway around the world to help NASA track Japan's Hayabusa spacecraft as it plunged into Earth's atmosphere at 27,000 mph and shattered over the Australian outback. After boarding the DC-8 and flying to 41,000 feet, their hard work finally paid off when they successfully recorded the fiery re-entry:

"As it came into our camera's field of view, Hayabusa looked like a little white dot at first, and we all followed it for a few seconds without uttering a sound," says young James Breitmeyer. "Then it exploded into a big orange fireworks display, with pieces flying off. Everyone crooned 'Ooooo' at the same time!"
The recording was made as part of the Hayabusa Re-entry Airborne Observing Campaign. Dantowitz and his students Breitmeyer, Brigitte Berman, and Yiannis Karavas were invited to join the effort because of Dantowitz's expertise in optical observations, tracking, and spectroscopy.

Launched on May 9, 2003, Hayabusa became the first space mission to make physical contact with an asteroid and attempt to return samples to Earth. Its 7 billion mile round trip to asteroid Itokawa ended with the June 13, 2010, re-entry. Researchers are hoping that bits of the asteroid's surface are sealed inside the sample-return capsule, which parachuted safely to the ground as bits of the mother ship fell in flaming smithereens, with three spellbound teenagers looking on.

The observing campaign was designed to measure the conditions the capsule's heat shield had to endure as the capsule plummeted through Earth's atmosphere.

"We had flown several practices, but when we took off for the real thing, I felt a surge of adrenaline," says Breitmeyer. "I was on the edge of my seat, anxious for our plane to arrive at the right place at the right time."

"We got to the rendezvous area 30 minutes ahead of time," says Dantowitz. "So we practiced the rendezvous to make sure everyone knew which stars to line the cameras up with to capture Hayabusa's re-entry. By the time we finished the trial run, we had only 2 or 3 minutes to go."

"It was quiet and cold and dark as we waited," says Breitmeyer. "We were all a bit jittery. We knew all our hard work over the past year came down to this moment. A voice on the intercom broke the silence – 10, 9, 8, ….3, 2, and then someone shouted 'there it is!'

"As our screens lit up with the burning bus and the small capsule I was so excited I could have jumped right out of my chair," says Berman. "But I didn't. I knew I needed to concentrate in case something went wrong with our cameras or monitors; if I was in an uncontrollable frenzy this would not be possible."

"After the main bus deteriorated you could see the capsule still intact," says Breitmeyer. "Then the capsule decelerated, and we lost sight of it. It was over. We all started yelling and cheering – we practically rocked the plane! The same people who had been biting their fingernails minutes ago were now shouting and laughing."

Except for Berman: "My stomach was jumpy and I couldn't wait to congratulate my other team members but I was frozen in place. I, Brigitte Berman, in a NASA flight suit, on a NASA airplane, had just successfully helped image the reentry of a spacecraft during a NASA mission! I sat stunned in disbelief."

One of the student-run cameras streamed the re-entry video directly to the world below via satellite. Ames Research Center posted the video to the internet; by the time the plane landed the video had been downloaded over 100,000 times.

"In addition to the incredible video and images of the spectacle, the students collected data on the brightness and spectra of the plummeting sample return capsule and pieces of disintegrating spacecraft," says Dantowitz. "This will reveal how the capsule's thermal protection system fared during re-entry -- critical information for researchers designing next generation spacecraft."

"Without these students, we could not have collected the level of data we got," says NASA's Peter Jenniskens, the re-entry mission's principal investigator. "I was very impressed by how well prepared they were. I'm happy about that – these teenagers will be our replacements."

The teenagers are happy too. "I have always dreamed of being on a NASA mission," says Berman. For him and the others, this could be just the beginning.