A small cadre of exceptional students 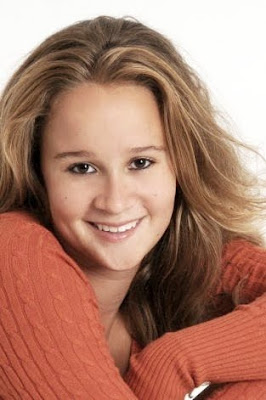 Connecticut Weston High School senior Christina Brasco is one of the nation's top physics students.
And what did you do this summer...sit by the pool...cruise the mall? The American Association of Physics Teachers held a physics camp for those special students.

"Weston teen a physics whiz; Senator Dodd: We need you"

Weston News
For Christina Brasco, the writing was on the blue exam booklet she took home from the first day of Kindergarten.

"My mom always tells this story, where I sat down at the kitchen table and started doing math," she said.

"Five digits confused me too much, so I stopped," she recalled. "My mom saw me doing this and she was like, `Oh my God, I'm into something with this child...'"

These days, the Weston High School senior is more likely to be stumped -- if at all -- by thermodynamics, oscillating waves, relativity theory and modern atomic physics -- all topics which she's spent the past year teaching herself in second-year A.P. Physics.

But in late May, she had some extraordinary help. She was selected as one of the top 20 high-school physics students in the country, and spent 10 days tackling a year's worth of college physics at the University of Maryland.

The "camp" was run by the American Association of Physics Teachers, which had whittled a pool of 3,500 high-school physics whizzes down to 300 in February; and then dropped that group with a second round of testing to 20 in April.

Brasco was among them. She was one of four girls.

While at the intensive physics camp, Brasco -- and the other winners, who hailed from Ohio, Iowa, Oregon, California, New Jersey and several other states -- rose each morning at 7 a.m., had a quick breakfast and dove right into physics until lunch. They did physics from early afternoon until dinner. Then they splayed out in their hotel's conference room, untangling derivations and solving practice problems -- tasks which they didn't have time for in class -- until midnight neared.

Outside of class, they toured the National Air and Space Museum, visited the Albert Einstein statue at the National Academy of Science, and met with their respective senators. Brasco met with U.S. Sen. Chris Dodd, D-Conn., and U.S. Rep. Jim Himes, D-4. At the time, the senators were engrossed in the Gulf of Mexico oil spill, and were especially receptive to the group's budding brain-power.

"They were like, `Look, we need engineers and scientists,'" Brasco said. "It was interesting to go down there on the day that we did."

The students were tested one final time at camp's end. The top five scorers earned spots representing the U.S. at the International Physics Olympiad, which will be held in Zagreb, Croatia, in late July. Though Brasco didn't make the cut, she doesn't seem to mind.

"People said the camp would be the highlight of my high-school career," she said, having returned home from her final day of classes earlier this week. "I didn't expect that it would be, but it really was the highlight."

It was also a highlight for her Weston High School physics teacher, Jack Kingston.

"I was just so jazzed that she accomplished this," he said. "This was, for me, the biggest and greatest thing of the year."

Kingston has taught Brasco for three years now. She started as a sophomore in his standard physics class -- not even in his honors class, Kingston added. Brasco said she'd have taken the honors physics if she weren't already in five honors classes at the time. But, as she enjoyed the standard class, she borrowed the honors textbook from Kingston and looked through it on her own.

The next year, she was just one of two juniors to complete Kingston's A.P. Physics course. With that out of the way, she and Aaron Kabcenell enrolled last fall in A.P. Physics II, which is largely an independent study, with some oversight from Kingston.

"Aaron's a major brainiac also," Kingston noted. "He's going to Princeton next year. So to have the two of them at the same time was extraordinary."

Asked her favorite part of physics, Brasco described the process of getting immersed in a complex problem.

"So here's this problem that not a lot of people can solve, and I can do it," she explained. "[I like] just throwing numbers at it. Sometimes, you try a few different things and get to a dead end, so you try something else. It's so rewarding when you get the final solution right. When you get a number, that's just such a great feeling. And then you look back on your work and say, `Oh my God, I just worked two pages on that problem!'"

Of the eight physics-camp students heading to college this fall (12 are still underclassmen), Brasco is the only one not headed to Cambridge, Mass. Four will be entering MIT. Three have enrolled at Harvard. Brasco is going to Yale. She committed to study there last fall.

In fact, Brasco signed with Yale for its diving program. She's been a competitive diver for seven years and said she can't wait to join the team in New Haven.

"I was just goofing around on the Weston Field Club's diving board one day when I did a flip and thought, `Hey, I'm pretty good at this; let's do it,'" she said, explaining her start in diving. "I dabbled in lacrosse and basketball too, and was always into athletics. But I'd never found something I was really good at. This has worked out pretty well."

Kingston suspected that same "gee-whiz" approach will have Brasco graduating from Yale in four years as a top physicist.

"The funny thing is, she still maintains she wants to be a chemical engineer," he said. "But Aaron and I are both convinced she'll be a physics major after one semester at Yale."
Posted by Mercury at 4:09 AM