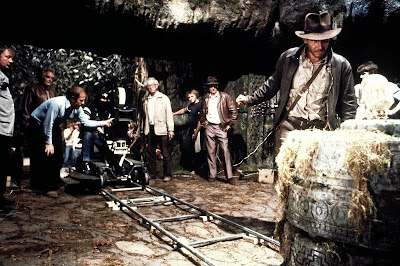 Films used as example of what not to do, but they inspire aspiring scientists

Associated Press
Indiana Jones managed to retrieve the trinket he was after in the opening moments of "Raiders of the Lost Ark." He pretty much wrecked everything else in the ancient South American temple where the little gold idol had rested for millennia.

Though he preaches research and good science in the classroom, the world's most famous archaeologist often is an acquisitive tomb raider in the field with a scorched-earth policy about what he leaves behind. While actual archaeologists like the guy and his movies, they wouldn't necessarily want to work alongside him on a dig.

Indy's bull-in-a-china-shop approach to archaeology will be on display again May 22 with "Indiana Jones and the Kingdom of the Crystal Skull," in which he's sure to rain destruction down on more historic sites and priceless artifacts.

Real experts in antiquities acknowledge that the movies are pure fiction that present archaeology as blockbuster adventure, yet they cannot help but cringe at the way Indy manhandles the ancient world.

"There are codes of ethics in archaeology, and I don't think he would be a member. Not in good standing, anyway," said Mark Rose, online editorial director for the Archaeological Institute of America.

"It wouldn't be quite as much fun if you followed protocol, I think," said Karen Allen, who is reprising her "Raiders" role as Indy's old flame Marion Ravenwood. "Crystal Skull" reunites Allen with Harrison Ford as Indy, director Steven Spielberg and executive producer George Lucas.

'Not an adventure with a whip'

In a career spanning 27 years and three previous films, Indy has been both a blessing and curse for the musty world of archaeology, fanning interest in the field beyond academic circles but doing a Hollywood number on how the job actually works.

In 1989's "Indiana Jones and the Last Crusade," nerdy Professor Henry Jones Jr. tells students that 70 percent of archaeology is done in the library and advises them to "forget any ideas you've got about lost cities, exotic travel and digging up the world. We do not follow maps to buried treasure, and `X' never, ever marks the spot."

Trading his classroom tweeds for his leather jacket and fedora hat, his alter-ego Indiana Jones then proceed to smash through crypts, kill scores of Nazis and desecrate a grave by using a human leg bone as a torch. And, in one scene, "X" literally does mark the spot.

The reality of archaeological field work is not a lone hero dashing into hidden chambers with a bullwhip and a pistol and coming away with a priceless relic. It's large groups of academics and students painstakingly sifting through grids to retrieve artifacts as mundane as pottery fragments.

"It is rather adventurous in a way, because for the most part, you're going to some exotic country and delving into their past. But it's not an adventure with a whip and chasing bad guys and looking for treasure," said Bryant Wood, an archaeologist with Associates for Biblical Research.

"You're working at one site tediously, probably for many, many years and spending more time processing the finds and writing reports than you do actually digging at the site. But that wouldn't make for a very good story, spending 70 percent of the time in a library."

Bitten by a viper in Iran

The most exciting thing that happens to many archaeologists in the field might be battling dysentery or coping with a lemon of a Land Rover.

"I spent a lot of time walking in cornfields and soy bean fields in the Midwest, and nothing very dramatic ever happened while I was out looking for artifacts," said Rose of the Archaeological Institute, whose trustees include Indy star Ford.

"To be honest, it's a lot of drudge work. You can end up producing a 600-page Ph.D dissertation, and it's important and useful and it's good that someone has done it. But it's not going to be made into a major motion picture anytime soon."

Paul Zimansky, an archaeology professor at the State University of New York at Stony Brook, once had an adventure reminiscent of Indy's fear of snakes. Zimansky had to drive at breakneck speed to get a colleague to a doctor after he was bitten by a viper in Iran.

On a dig in Iraq, one student dressed like Indy, minus the whip, and whenever the team made a notable find, they would play the "Indiana Jones" fanfare, Zimansky said.

Indy's main value in the academic world has been as an inspiration to aspiring archaeologists, said Zimansky, who noticed a spike in new students in the early 1990s while teaching at Boston University.

"If you asked these people why they were becoming archaeologists, it always starts off with Indiana Jones. It actually converted a number of people. They got their initial interest in archaeology from Indiana Jones," Zimansky said.

The students certainly knew they were studying to be scholars, not treasure hunters, though Zimansky would have liked Indy to be a more realistic role model.

"I wish he'd take more notes and things. What's his publication record?" Zimansky said. "But I don't think anybody ever bought the ethos of Indiana Jones as a real career track."

Adds Jane MacLaren Walsh, an anthropologist for the Smithsonian Institute's National Museum of Natural History: "Some people would like to think of themselves as Indiana Jones, but nobody I know really fits the bill at all."

Other than Indy's brief classroom scenes, the closest thing to authentic archaeology in the "Indiana Jones" flicks is done by the bad guys, whose elaborate, systematic digs in "Raiders" resemble actual excavations.

"Not a whole lot of what we know as archaeology goes on in these movies, except what the Nazis do. They seem to be doing some real archaeological work," said Walsh, who wrote the cover story in the May-June issue of Archaeology magazine examining the real history of crystal skulls featured in the new "Indiana Jones" movie.

'Examples of what not to do'

Jaime Awe, director of the Institute of Archaeology in Belize, is a big fan of the "Indiana Jones" movies but shows them to students as "examples of what not to do," he said.

"I tell them the only difference between Indiana Jones and myself is he always gets the goodies and gets the beautiful women and gets paid a lot of money, and I don't get any of that," Awe said.

"But I have a hell of a lot of fun just like he does, and it's just as much an adventure. Most of us do archaeology because we love the opportunity to explore, to discover, to search for clues," said Awe, who appears on the Sci-Fi Channel documentary "Mystery of the Crystal Skulls," premiering May 18. "It's like having a big sandbox. Like Indiana Jones, we keep being kids at heart."

"Indiana Jones" and other productions such as "The Mummy" and "Lara Croft: Tomb Raider" flicks benefit archaeology by getting general audiences thinking and talking about the ancient world, said Bob Murowchick, associate professor of archaeology at Boston University.

But the movies emphasize the tomb-raiding aspect, leaving the impression that artifacts are there for the taking by whoever stumbles on them first, he said.

"The one thing we do worry quite a bit about is the looting aspect, because archaeological looting is really a serious issue," Murowchick said. "This kind of glorifying of breaking into a tomb and snagging a crystal this or golden that feeds into the notion that these are valuable objects, and we should all get it while we can."
Posted by Mercury at 7:50 PM