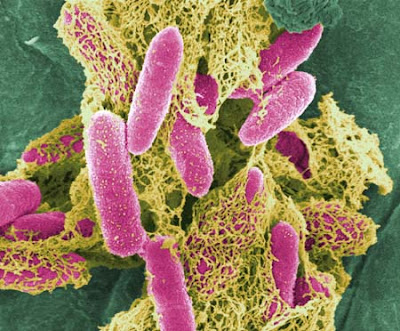 PhysOrg.com
Scientists at the UA and Loma Linda University found that reusable grocery bags carry more than just groceries. Samples taken from dozens of bags, which almost never get washed, showed half contained E. coli and other bacteria that could pose health risks.

Reusable grocery bags can be a breeding ground for dangerous food-borne bacteria and pose a serious risk to public health, according to a joint food-safety research report issued today by the University of Arizona and Loma Linda University in California.

"Our findings suggest a serious threat to public health, especially from coliform bacteria including E. coli, which were detected in half of the bags sampled," said Charles Gerba, a UA professor of soil, water and environmental science and co-author of the study. "Furthermore, consumers are alarmingly unaware of these risks and the critical need to sanitize their bags on a weekly basis."

Bacteria levels found in reusable bags were significant enough to cause a wide range of serious health problems and even death. They are a particular danger for young children, who are especially vulnerable to food-borne illnesses, Gerba said.

The study also found that awareness of potential risks was very low. A full 97 percent of those interviewed never washed or bleached their reusable bags, said Gerba, adding that thorough washing kills nearly all bacteria that accumulate in reusable bags.

The report comes at a time when some members of the California Legislature, through Assembly Bill 1998, are seeking to promote increased consumer use of reusable bags by banning plastic bags from California stores.

"If this is the direction California wants to go, our policymakers should be prepared to address the ramifications for public health," said co-author Ryan Sinclair, a professor at Loma Linda University's School of Public Health.

The report noted that "a sudden or significant increase in use of reusable bags without a major public education campaign on how to reduce cross contamination would create the risk of significant adverse public health impact."

Geographic factors also play a role, said Sinclair, who noted that contamination rates appeared to be higher in Los Angeles than in the two other locations - a phenomenon likely due to that region's weather being more conducive to growth of bacteria in reusable bags.

The report, "Assessment of the Potential for Cross Contamination of Food Products by Reusable Shopping Bags," offered the following policy recommendations for lawmakers, as well as tips for consumers who use reusable grocery bags:

• States should consider requiring printed instructions on reusable bags indicating they need to cleaned or bleached between uses.

• State and local governments should invest in a public education campaign to alert the public about risk and prevention.

• When using reusable bags, consumers should be careful to separate raw foods from other food products.

• Consumers should not store meat or produce in the trunks of their cars because the higher temperature promotes growth of bacteria, which can contaminate reusable bags.

"As scientists, our focus was not on the relative merits of paper, plastic or reusable grocery bags," Gerba said. "Our intent was purely to provide relevant data to better inform consumers and lawmakers about the public health dimensions that could arise from increased use of reusable bags. With this knowledge, people will be in a better position to protect their health and that of their children."

Field research for "Assessment of the Potential for Cross Contamination of Food Products by Reusable Shopping Bags" was conducted according to established scientific methodologies and best practices.

The samples tested included 84 actual consumer reusable bags (25 in Los Angeles, 25 in San Francisco, 34 in Tucson). All but four of those bags were made of woven polypropylene. New reusable bags and plastic bags were tested; none contained any contamination.

The American Chemistry Council underwrote the research project, which was conducted independently of the organization.

Enter "plastic bags" in the blog's search engine for more.
Posted by Mercury at 7:17 AM