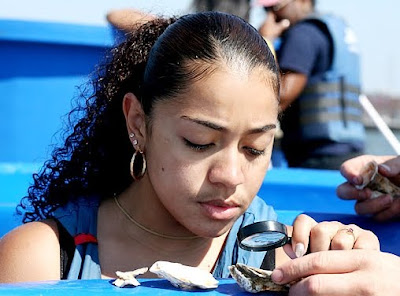 Stephanie Perez inspects an oyster at New York Harbor School on Governors Island
This is unusual.

"At the New York Harbor School, Growing Oysters for Credit"

The New York Times
BENEATH a floating dock off Governors Island, tucked behind the squat octagonal white ventilation tower for the Brooklyn-Battery Tunnel, there are oysters growing in New York Harbor.

And not just any oysters. These little bivalves, 500,000 strong, make up the largest concentrated oyster population that the harbor has seen in perhaps a century.

On a recent spring day, Pete Malinowski, who tends to these oysters, removed one of the metal grates that have been fitted into the dock’s surface, revealing a series of silos, as he calls the 60-gallon plastic tubs in which his charges live. He plunged his hand into a silo and pulled up a few specimens for examination. They were small, maybe an inch and a quarter long, but they looked like normal oysters: ridged, craggy and tightly shut — not the grotesque mutant mollusks that the words “cultivated in New York City waters” might suggest.

“I was skeptical about their rate of survival because they all came in at two millimeters, when they’re pretty vulnerable,” Mr. Malinowski said. “But look at this, the papery-thin part.” He pointed to the outer rim of a shell, thin and translucent like the tip of a fingernail. “That’s new growth, which is awesome.”

Mr. Malinowski, 27, is a second-generation oysterman whose parents, Sarah and Steve, run the Fishers Island Oyster Farm in Block Island Sound. If you’ve ordered oysters in a New York City restaurant, chances are you’ve eaten ones from Fishers Island, whose longtime champions include the chefs David Bouley, Michael Lomonaco and Alfred Portale.

But Mr. Malinowski is not farming oysters for commercial purposes, and the person to whom he reported this growth data was not some leathery old sea dog in a woolen cap but a fresh-faced 17-year-old from Canarsie, Brooklyn, named Jeptha Sullivan.

Mr. Malinowski is an aquaculture teacher at the Urban Assembly New York Harbor School, a part of the city’s public school system. Mr. Sullivan just completed his senior year there with the distinction of having been named the school’s most experienced diver.

To see these young men working together is to witness the confluence of two extraordinary narratives: that of the Harbor School, 85 percent of whose students come from families living below the poverty line; and that of the New York Harbor oyster, the briny, bountiful staple that gave the city much of its flavor, literally and figuratively, until it was done in by overharvesting and pollution.

Last Friday was graduation day for Mr. Sullivan and his 60 or so classmates. Their commencement ceremony was the first official event held at the Harbor School’s striking new campus on Governors Island. Until now, the school, which opened in 2003, had been in the landlocked neighborhood of Bushwick, Brooklyn.

The school’s new home, where classes will begin in September, is in a location that befits its name: on the harbor in a large, handsome brick building on the west side of the island that used to be a Coast Guard hospital. There are views of the Statue of Liberty across the Upper Bay.

The building, with a 432-student capacity, has been retrofitted with state-of-the-art facilities, including a fin-fish and shellfish production lab, a large room dominated by a Wonka-esque network of tubing and tanks in which scallops, mussels, clams, horseshoe crabs and blackfish, among other indigenous harbor species, will be cultivated.

There is also a marine-tech wood shop where students will build 21-foot sloops, and there will soon be an organic garden and an aquaponic freshwater system for farming tilapia; that is, for raising the fish symbiotically with plants.

In keeping with the school’s overall green ethos, students and faculty members will eat together in the expansive dining hall using washable, reusable plates and trays and metal cutlery. The school secured an industrial dishwasher, a rarity in the city school system. Harbor School students do not pay for their meals, in accordance with federal policy, since 70 percent or more of the student body qualifies for free lunch.

If the aquaponic system works to Mr. Malinowski’s expectations, the students will dine on tilapia and tomatoes they will have raised themselves. (The lab’s saltwater species will be raised strictly for educational and habitat-restoration purposes.)

But the oyster is the Harbor School’s calling card, the symbol of its goals. Every incoming freshman, as if pledging a fraternity, must swallow one — though it must be noted that these initiation oysters come from Mr. Malinowski’s parents’ place 100 miles away. Eating a New York Harbor oyster is forbidden and potentially illness-inducing. Which is both sad and the whole point.

On Governors Island last month, a group of seniors was helping Mr. Malinowski install a series of tanks and pumps at the end of Lima Pier, which juts off the island’s southern tip. This is one of two off-campus sites — the other being the eco-dock, as the floating dock is called — where oysters (their seed also donated by the Malinowskis) are being raised in harbor water.

“Here I am, talking about salinity, turbidity and nitrates,” said Janique Moore, 18, who lives in the Starrett City apartment complex (now known as Spring Creek Towers) in East New York, Brooklyn, and is contemplating becoming an environmental lawyer or a marine biologist. “But I’ll admit that when I was little, I didn’t think there were animals living in these waters. I didn’t even think of New York as a harbor-y kind of city.”

Three hundred years ago, the lower Hudson River estuary was home to 350 square miles of thriving oyster beds, their harvest enjoyed by Native Americans and European settlers alike. Right up until the end of the 19th century, lower Manhattan was rife with inexpensive oyster cellars where a nickel or two bought you dozens of oysters, raw, stewed or fried.

But greed and carelessness proved to be the urban oyster’s undoing. Dredging and raw sewage in the 19th century and industrial pollution in the 20th destroyed its natural habitat. The few wild oysters that survive in New York Harbor are inedible.

Enter Murray Fisher, 35, the program director of the Harbor School. Raised on an organic cattle farm outside Richmond, Va., Mr. Fisher spent much of his childhood outdoors, a preservationist ethic ingrained into his being at an early age.

In 1998, fresh out of Vanderbilt University, he went to work for Riverkeeper, the environmental organization devoted to protecting the Hudson. It was there that he had the idea for a city school devoted, as he put it in an interview, “to a curriculum that’s restoration-based and makes kids feel that they’re valuable contributing members of society.”

“At the very least,” Mr. Fisher said, “it would give them a relationship with a marine environment, which hardly anyone has in New York City.”

Oysters would be central to this curriculum, and not just for historical reasons. In a healthy marine ecosystem, oysters are a keystone species. As they spawn and multiply, they form beds that expand into reefs, and these reefs in turn become hospitable habitats for all manner of marine life: crabs, fish, ribbony eelgrass.

What’s more, each oyster is a natural water-filtration system, pumping between 20 and 50 gallons of seawater through its gills each day and extracting algae and phytoplankton for its food.

Despite his inexperience, Mr. Fisher, through innate political savvy and sheer bullheadedness, willed the Harbor School into existence. Crucially, he forged an alliance with the Urban Assembly, a nonprofit organization that has created 22 small, theme-based public schools in low-income areas that are otherwise served by large, underperforming city schools.

Mr. Fisher said he hoped that the Governors Island oysters would ultimately be the Adams and Eves of a marine-life renaissance in the harbor. If multiple oyster reefs are successfully established throughout the Hudson River estuary — a long-range goal the Harbor School is trying to realize in partnership with NY/NJ Baykeeper, a partner organization of Riverkeeper — the environmental impact could be significant.

Already, an experiment very much like this is under way, conducted by Bart Chezar, 63, a former engineer for the New York Power Authority who has spent his retirement establishing his own oyster colony (with the city’s and state’s permission) in the Bay Ridge Flats, a large area of shallow water off the coast of Red Hook, Brooklyn.

In May, several Harbor School students joined Mr. Chezar at the site, helping lay down 500 oyster shells with live oyster spat attached. (Spat are immature oysters that have ended their free-swimming larval phase and have attached permanently to something.) The shells were fastened with plastic loops to two-foot-square grids that had been fashioned from PVC pipes filled with sand to weigh them down. These grids were then placed on a bed of empty Fishers Island oyster shells.

Several weeks later, Mr. Sullivan dove into the murky waters of the Bay Ridge Flats and emerged holding up one of the grids for examination. The progress was promising: the spat, which in May looked like mere dots, had already grown into recognizable oysters: tiny, but with little hinged shells.

Back on the shore, he considered his own progress.

“I never even knew how to swim until a few years ago,” he said. “I had a near-drowning incident when I was around 10. But since my sophomore year I’ve been a certified Open Water Diver, which my mother likes to tell everybody,” he said, smiling sheepishly.

Mr. Sullivan lives with his mother, who makes ends meet as a baby sitter; his father is currently unemployed. This fall, he will attend Hobart College in Geneva, N.Y., where he plans to major in environmental studies.

“What’s great about this experience is that it gives a kid so many clear career pathways that he might otherwise not be exposed to,” Mr. Fisher said. “The oyster thing alone, it’s not just about oysters. It’s about policy, technology, permits, aquaculture. We need people to become scuba divers, boat drivers, photographers, scientists, lawyers, lawmakers, marine-policy experts.”

The Harbor School program, like the seafaring life, is physically demanding. Merely commuting to the school from eastern Brooklyn — first by subway to the South Ferry station in lower Manhattan, and then by ferry, followed by a brisk cross-island walk to the campus —will be a taxing task in the dark, wind-whipped mornings of winter.

With the water warming up, the mature oysters in the eco-dock will soon be spawning. Still, the persistent presence of heavy metals and PCB’s in the harbor will probably preclude the school’s students from eating city-bred oysters within their lifetimes.

But it’s not inconceivable that one day, a child of Jeptha Sullivan will be able to sit down at the counter of the Grand Central Oyster Bar and order a half-dozen Bay Ridges, a half-dozen Staten Islands and maybe a couple of TriBeCas.
Posted by Mercury at 5:52 AM