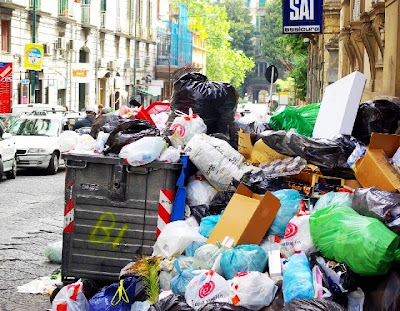 "The Joy of Garbage" at Santa Clara University

Do you live like a pig? Get some college credit for it. Learn to love your trash instead of just tossing it away like yesterday’s girlfriend. From banana peels to beer bottles, you’ll appreciate all the garbage you can produce in this weird class. Of course the class it basically teaching you the value of recycling and how to best use the garbage you leave behind. Hopefully it doesn’t turn you into a pack rat or a recreational homeless person.
"Keeping Up with the University of Stupid"

American Thinker
Not many people will see Arkansas as a fortress against the barbarism that is threatening to bring this nation down. This kind of barbarism is often displayed by college students -- and not with old-fashioned Animal House hijinks, but by Obama zombies who celebrated in front of the White House by tauntingly singing the old Beatles "Good-bye" song and waving the Soviet flag. Today's college students have also graduated to high-level anti-Semitism, inquisitions about fellow students' attitudes on such things as gay marriage, and a belief in confiscating private property to redistribute wealth. All this is done after childhoods spent being pampered and flattered while being put into little groups to discuss such problems as global warming -- after watching a former vice president narrate a film about the coming environmental apocalypse.

ACTA is not a fashionable group in academic circles. They provide donors and trustees information about what goes on behind the ivy-covered walls, where faculty, indoctrinated by the 1960s radicals, devise classes, determine requirements, and plot to keep out critics.

In May, ACTA president Anne Neal wrote two letters to the trustees and an editorial in the Arkansas Democrat-Gazette deploring the dumbing down of the curriculum.

But according to John Ed Anthony, Chairman of the Board of Trustees, the fact that a student at the University of Arkansas will be able to substitute Gender Studies for Introduction to Philosophy and graduate with only college algebra, eight hours in science (which could include "Chemistry in the Modern World"), no literature classes, and no foreign language does not mean that the curriculum is being dumbed down.

Anthony, in a letter to Neal, states that such changes are overdue because...the core curriculum has not changed in fifty years! He describes the university's ambition as twofold: "to bring the university's core curriculum in line with peer institutions across the nation, and to empower faculty at the departmental level to determine what their students need to be successful." The passage of Arkansas's Act 182, which makes it easier for students to transfer from community colleges, "expedited a process that was already underway and very much needed."

Chancellor G. David Gearhart, in his editorial published in the Arkansas Democrat-Gazette in response to Neal's, echoed Anthony's call to "empower" faculty, saying, "Faculty must be the driving force on setting the new requirements."

That might explain why Intro to Gender Studies will count as a class to fulfill the six hours required in Fine Arts/Humanities, and why someone earning a bachelor of arts degree no longer is required to the take the sophomore-level philosophy class previously required. At some colleges, such classes in gender oppression are required as standalone classes or are the focus of other mandated classes, like "American Gender History."

The love of wisdom is being replaced by the love of grievances.

Of course, to the newly minted Ph.D.s in such fields, Intro to Gender Studies is more important than those old-fashioned subjects like philosophy, math, science, and foreign languages. They are carrying out Woodstock nation's poet-warriors' battle cry: "Hey, hey, ho, ho. Western civilization's got to go!"

The old subjects are deemed guilty of "Eurocentrism." They encourage linear thinking. They are remnants of the old patriarchy that values logic and skills. Capitalists think those abilities are worth much more than the circular, emotive (illogical) thinking used in gender studies. Philosophy, math, science, literature, and foreign languages do not encourage students to become social activists and community organizers. They encourage students to study the structure of language, learn the philosophical and literary heritage of the West, weigh evidence, solve problems, innovate, express ideas logically, and seek truth.

Gearhart's response to Neal's op-ed demonstrates the rampant institutional decay of higher education. He charged that ACTA's criteria for curriculum "lie outside generally accepted academic norms," noting that ACTA "issued less favorable letter grades of 'D' and 'F' to the following institutions: Vanderbilt, Harvard, University of California-Berkley, and the University of Virginia." He sniffed, "In light of Ms. Neal's column, it appears we are now in danger of joining the ranks of these institutions."

Then he offered, "If so, we are prepared to be judged by the company we keep."

The company the University of Arkansas will keep will be Henry Louis "Beer Summit" Gates at Harvard; Kelly Oliver, philosophy and women's studies professor at Vanderbilt, whose latest book deals with "animal studies"; Michael Mann, former professor of environmental science at the University of Virginia, now at the University of Pennsylvania, implicated in Climategate; and all those partaking in the proud tradition of radicalism at Berkley, from the "free [profanity] speech movement" in the 1960s to protests for continued largesse from taxpayers.

When students aren't even exposed to dialogues on justice and love or the Socratic method, how can they think in a truly "critical" way about "hope" and "change"? If the idea of evidence and truth is dispensed with in favor of perspective (such as that of women or any number of groups), how can students recognize the origins of "spreading the wealth"? Does anybody care if they don't know that there is no such language as "Austrian" or that a pop star president can't get a simple phrase right in the language he says Americans should be teaching their children? Or if the vice president talks about President Roosevelt addressing the American people on television? Doing a Google search doesn't help if you can't distinguish between sources, or if your grade depends on attitude, and not academics.

Chancellor Gearhart wrote, "We are committed to increasing the number of degree holders in the state of Arkansas."

Arkansas is in forty-ninth place in terms of percentage of citizens holding college degrees. And under a system of federal aid that follows bodies in classroom seats, it's to administrators' benefit to make it easy for students to enroll and graduate.

President Obama, in (of course) asking for more spending on education, recently announced his of goal making the U.S. the country with the highest percentage of college graduates by 2020. Gee, I wonder why.
Posted by Mercury at 6:07 AM