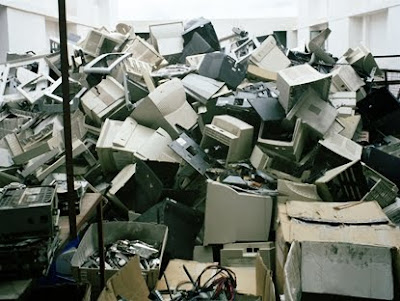 "...no work is dirty if it feeds my family."
"Recycling India's e-waste brings jobs to poor -- and health, environmental fears"

The Washington Post
TILA BYEHTA, INDIA -- This village on the outskirts of New Delhi is a graveyard for the electronic devices that power India's information age.

India's rapidly growing economy generates more than 500,000 tons of electronic waste every year, a number expected to reach 1 million tons by 2012. The obsolete computer and cellphone parts are dismantled, refurbished and recycled manually by hundreds of thousands of unorganized villagers across the country.

Critics say the work poses risks to the villagers and the environment, and lawmakers are considering a law that would set up large recycling plants and establish environmentally safe practices for disposing high-tech toxic trash. The law would also ban the import of computers for "charity" and "reuse" from developed countries such as the United States, a practice that began in the 1990s because computers were so expensive in India. Officials say the donations have become a cover for e-waste dumping in the country.

But the backyard and storefront recyclers fear that the new regulations will leave them jobless, just as business begins to boom.

"My skin itches all the time. My head feels heavy with the foul smell I breathe in every day," said Shakila Mohammad, 42, peeling thin copper strips off piles of burned circuit boards. A few feet away, her daughter, 12, worked on another pile. "I do not know if this is safe or unsafe. But no work is dirty if it feeds my family."

Mohammad's work of recovering copper by burning circuit boards is considered one of the most hazardous: Carcinogenic gases released during the process can cause irreversible damage to the kidney, neurological and reproductive systems. After the copper strips are removed, the mercury-and-lead-laden residue is dumped into rivers and on farms, increasing the risk of cancer if it enters the food chain.

The new law would prohibit the manual recovery of copper and gold and reduce the amount of hazardous substances used to make new equipment. Producers would pay for collecting electronic waste.

"We have to grapple with this problem head-on because our e-waste generation will grow exponentially in the coming years," said Rajiv Gauba, joint secretary in the Ministry of Environment and Forests. "There is a huge infrastructure deficit to deal with e-waste in India. We will soon fund 50 percent of the capital costs to set up new reprocessing and recycling plants."

Under the proposed law, recycling would take place only in licensed plants, Gauba said.

Many recyclers are organizing to negotiate so that they will not lose their jobs under the new law.

"The informal recyclers have the skill and experience. It is laudable that the government is trying to save environment and lives, but it should not destroy livelihoods in the process," said Shashi Bhushan Pandit, secretary of the newly formed Harit Recyclers Association.

At first, the government resisted drafting new e-waste legislation, saying existing laws on hazardous substances were adequate. Officials were reluctant to burden the information technology industry, and there was little public awareness about the issue.

At an e-waste conference last week, Alok Bharadwaj, senior vice president of Cannon India, said manufacturers need to create a common collection system for used electronic goods. "Let us charge the consumer something extra at the time of purchase, and then reimburse it when the consumer brings back the obsolete item to us," he said.

But the companies were divided on what to do with unbranded electronic equipment, roughly 50 percent of the total in India.

Meanwhile, in eastern New Delhi, streets are stacked up with hundreds of old computers, ready to be dismantled and separated.

"Every part of the computer has value. We do not throw anything out," Zakir Husain, 37, said as he sat on the ground dismantling an old printer. "People sitting in fancy air-conditioned offices are unaware that every time they upgrade, our work picks up."

Use the blog's search engine for related articles.
Posted by Mercury at 6:50 AM

TILA BYEHTA - Where is this place in Delhi? I tried to search on Google Maps but it doesn't show any such place. Please give directions.

Tila Byehta, a village on the outskirts of New Delhi. Just get a New Delhi map and look around.