Internet Explorer data was a hoax 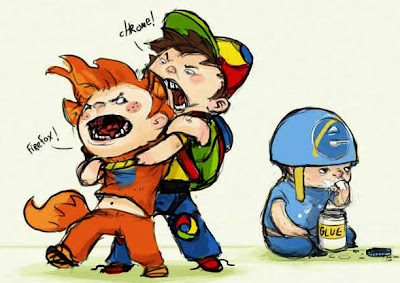 Suckered again. Not sure who to believe anymore.

ReadWriteWeb
After making the rounds on the Internet for a few days, a news story about research purporting to show that Internet Explorer users tend to have low IQ scores was revealed this morning to be a hoax. Evidently, the study, the press release and the supposed company that released it were all fake, a fact that, once revealed, forced dozens of news outlets who ran with it to concede that they were duped.

The hoax was perpetuated by an entrepreneur living in Canada named Tarandeep Singh Gill. He's the founder of a comparison shopping Website called AtCheap.com. In an email with ReadWriteWeb moments before he publicly revealed who he was, he told us that he hoped to lure a few people away from Internet Explorer, but he did not expect it to get the level of coverage that it did.

"I was really surprised that most media outlets fell for it," he said.

"While working on my latest website, IE6 compatibility was being a pain in the ass," he told us. "So I thought of doing this, with a hope that this would knock off a few people from IE6."

Anatomy of a Hoax: How Did It Spread?

Gill's hoax started with a phony company called AptiQuant, a self-described "psychometric consulting company." He bought the domain name aptiquant.com on July 14 (according to WHOIS records), threw up a Wordpress install and copied the content from another business' website wholesale, changing the names of staff members on the "Our Team" page, but leaving their headshots intact. He even went so far as to set up Facebook and Twitter profiles for AptiQuant, the latter of which was suspended after the hoax was exposed.

The similarities between the content of the two sites stopped at a press release titled Is Internet Explorer For The Dumb? A New Study Suggests Exactly That, which linked to a legitimate-looking PDF of a scientific study claiming to demonstrate a correlation between usage of Internet Explorer and having a low IQ.

The story began spreading online on July 28, with outlets as big as NBC, Business Insider and Mashable picking it up right away. Within a few days, hundreds of outlets had reported on the study, including some of the most reputable news sources in the world.

"At a certain point, AptiQuant's release itself became irrelevant; the conclusion was repeated because other, more trusted news outlets had reported on them," wrote Wired's Tim Carmody in a post that outlined several glaring red flags in the supposed research and on the fake company's Website.

Some Internet commenters were suspicious from the beginning, but it wasn't until today, five days later, that the whole thing was confirmed to be fake. Several hours after news of the hoax began making the rounds, whoever is running the AptiQuant Website posted this concession that the study was indeed concocted, adding a few more "tell-tale signs that should have uncovered the hoax in less than 5 minutes!"

So how does a fake news story like this get spread around so easily? The rapid online news cycle and pressure for writers to chase pageviews are at least partially to blame, former ReadWriteWeb writer Frederic Lardinois wrote on Silicon Filter. It also doesn't hurt that people generally like taking jabs at Microsoft and that Internet Explorer is the browser that many Web developers and IT workers love to hate, especially its antiquated version 6, which stubbornly lives on.


Pitch forks and torches will storm AptiQuant
Posted by Mercury at 6:23 AM