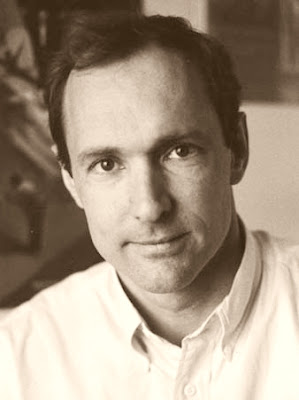 "The dream behind the Web is of a common information space in which we communicate by sharing information. Its universality is essential: the fact that a hypertext link can point to anything, be it personal, local or global, be it draft or highly polished."--Tim Berners-Lee.
Ideals change, don't they. Now the Web is mostly commercial, costly to cruise, selling everything from antiques to the latest fashion, appealing to our secret hates and lusts, and so on.

It was 20 years ago today that British physicist Tim Berners-Lee posted a description of a project he called the "World Wide Web" to an online newsgroup, effectively revolutionizing modern life. Working for CERN, the European Organization for Nuclear Research, Berners-Lee invented his service to allow scientists to easily share and access information via the Internet. Although the infrastructure of the "Net" had been growing for years, it was until then a highly technical system known mostly to academics and scientists like Berners-Lee. The World Wide Web, as Berners-Lee conceived it, would use the Net to connect documents with clickable links — or hypertext — and make them searchable.

Under the encouraging headline "Try it," Berners-Lee's post included information on accessing the first Web server and a Web browser prototype, and gave the address — or "coordinates," as he called it then — of an example website he'd created. This Web page — the world's very first — further explained the project he'd nicknamed "W3," explaining how to search the Web and how to build your own page. Academia began using the service first, then industry. In early 1993, Mosaic was released, the first Web-browsing software for PCs and Apple Macintosh computers. Anyone with an Internet connection could now surf — and help create — the Web.

Berners-Lee had written in that first post: "The project started with the philosophy that much academic information should be freely available to anyone." Today the word "much" seems quite an understatement, and "academic" almost laughable. But it is astonishing to be reminded that so much of what's on the Web is "freely available" because Berners-Lee created the Web for free. For his donation, he was named by Time magazine as one of the top 20 thinkers of the 20th century, and was awarded a knighthood in 2004.

Tim Berners-Lee [Wikipedia]
Posted by Mercury at 6:24 AM

Email ThisBlogThis!Share to TwitterShare to FacebookShare to Pinterest
Labels: the WEB, Tim Berners-Lee