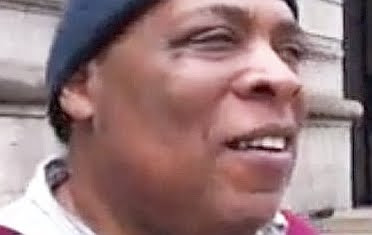 As a footnote to a previous post... Those higher academics--worth it? .

Internet Explorer data was a hoax

In normal economic times, we might be calling him Professor Maurice Johnson. But during this economic malaise, he's just been that guy on the street. Luckily, he's got a YouTube following.

Johnson, 55, has a masters in Plasma Physics from Dartmouth College and a masters in Electrical Engineering and Acoustics from Purdue University. Yet he's living in a homeless shelter in Boston, Mass. and has been out of work since November.

Johnson spent all of his savings and sold all of his earthly belongings, including his car, to prevent foreclosure on his parents' house so Cleveland, Ohio so that his mother with Alzheimer's wouldn't have to move.

"They paid my way through school," Johnson said. "If it's going to take ten years, I'm going to make their final years safe and comfortable." He then moved to Boston expecting to take a job he had been offered, but found out when he got there that it had been given away.

Johnson has been sending out his résumé to various places looking for a job. He hopes to get back into science or education. "I just want a chance. Science would be great, teaching would be great. There's nothing greater than teaching. Teaching physics would be a blast," he said.

He sounds plenty qualified to us. His LinkedIn profile says he worked as a computer consultant and at Lockheed Aerospace Corporation and Aerodyne Research Corporation. But he doesn't seem as surprised at his predicament. He's been out of work a while, and he thinks he's actually over-qualified. He says his race has also caused difficulties.

People who have been out of work for a while typically have a more difficult time getting a job. With 9.1% of the country and 17.2% of African-Americans out of work, Johnson's not the only one who is suffering due to the lack of opportunity.

Johnson hopes he'll find a job sooner or later. He's optimistic that feasible offers will become available soon. After all, he's ready to move on. "Frankly, staying at the shelter has been an experience I don't want to repeat ever in my life," Johnson said.

55 year old Maurice Johnston lives in Boston, by way of Cleveland. He has a Masters Degree in Plasma Physics from Dartmouth College, and a masters in Electrical Engineering and acoustics from Purdue University. He's worked over 10 years at Lockheed Aerospace & Aerodyne Research Corp. Maurice has taught in Science and physics, and took care of both his parents in their time of need. Maurice is very well spoken, (he sounds like Obama) and is very kind, so why is Maurice homeless.....

I bring to an organization the ability to interact with scientists, engineers, programmers and educators on their level, an open mind to appreciate their concerns, and the experience to make contributions to almost any field of research.

During my aerospace career, I evolved from a research engineer (EM theory) to a 'go to' man when there was a unique or urgent problem to solve. Both externally and internally, I traveled country-wide to assist companies in their EM applications, theoretical and experimental pursuits, to assist in solving current research problems and to educate potential customers in the latest technology.

One of the greatest joys I have had in research was the moment of discovery, a new mathematical algorithm or a novel approach to electro-magnetics that challenged the thinking of 'experts'. I have sought positions that explore new technical horizons. For example, a position in Astronomy or in creating the next generation of medical imaging technology would be both fulfilling and challenging.

I have always looked to the future, whether in technology or educating the next generation.With my diverse background, I hope to contribute to cutting edge research or to help create new technology and its applications.

During my down time, I have worked as a freelance computer consultant, fixing software and hardware problems on PCs for individuals and companies. I have even begun to receive requests for assistance from other states. Visualizing a persons setup and assisting them is a challenge, but it can be greatly rewarding.