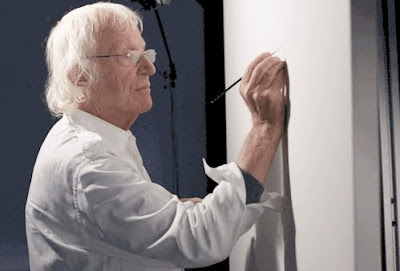 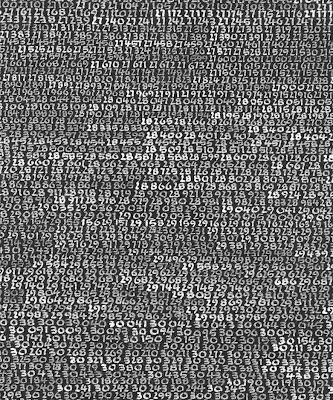 "Roman Opalka, Artist Who Painted Millions of Numbers, Dies at 79"

The Polish painter Roman Opalka, who painted an uninterrupted series of numbers across hundreds of canvases, over the course of more than 45 years, and became a leading figure in European Conceptual art, died on Saturday, in Italy, according to the Hurriyet Daily News. He was 79.

In 1965, Opalka embarked on his lifelong work, 1965/1 to Infinity, for which he painted white numbers in long rows across a gray background. When he ran out of space on one canvas, he picked up the series on another. “[M]y hand trembled before the hugeness of the task, this little 1, this radical commitment to the first instant of irreversible time,” Opalka once recalled, describing the moment he embarked on his massive project.

Seven years after beginning the series, he passed the number one million and began taking photographic self-portraits after the completion of each of his works.

Adopting this rigorously serialized approach, Opalka aligned himself with many other artists of the time who explored making art through systems and mathematics, like the French artist Daniel Buren (who paints stripes), the Japanese-American artist On Kawara (who paints the date he makes his paintings) and the German artist Hanne Darboven (whose drawings record long streams of mathematical computations).

Opalka was born in 1931 to Polish parents and lived in Germany, the United States, Poland and France, where he eventually settled in 1977. He participated in many of the art world’s most important international exhibitions, including Documenta in Kassel, Germany, in 1977; the Sao Paolo Bienal in 1987; and the Venice Biennale, in 1995 and 2003. He had one-person shows in New York at Yvon Lambert Gallery and John Weber Gallery.

“We will miss him,” the Yvon Lambert Gallery, now based solely in Paris, said in a statement. The gallery emphasized that he had “bridged classical painting and conceptual art perfectly, and with absolutely no compromise.”

“Opalka’s work, a methodical transcription of the passing of time, is circumscribed within his own life and will end only with the artist’s death,” writer Marco Pierini once said, “when the last of the painted numbers will not be followed by another one and the counting will be interrupted. This will leave the work not unfinished, but perfect.”

According to Polskie Radio, the first painting in Opalka’s lengthy painting series is in the Art Museum in Pódz', Poland, which will also be given his final work.

"Roman Opalka, an Artist of Numbers, Is Dead at 79"

Roman Opalka, a leading conceptual artist who, beginning with the numeral one in 1965, methodically painted consecutive numbers on canvas in a march toward infinity, died on Saturday near Rome. He was 79.

The death was confirmed by Jean Poderos, his publisher. Agence France-Presse reported that Slawomir Boss, his agent, told Polish newspapers that Mr. Opalka had fallen ill while in Italy and died of a “generalized infection” at a hospital near Rome.

Mr. Opalka, who had lived and worked in France since 1977, embarked on his quixotic project while working as an artist in Warsaw. Starting at the top left of a canvas measuring a little over four by six feet, and using acrylic paint, he used a fine brush (No. 0) to inscribe 20,000 to 30,000 white numerals on a black background in neat rows that ended at the bottom right corner. Each succeeding canvas, or “detail” as he called it, picked up where the previous one left off. As of July 2004, he had reached 5.5 million.

In 1968 Mr. Opalka changed his background color to gray, and four years later, as he passed the one million mark, he began adding a tiny amount of white paint to the background color after each canvas to lighten it gradually. By 2008 he was painting white numerals on a white background whose color he called “blanc merité,” or “well-earned white.”

In 1972 he also began speaking each number into a tape recorder as he worked and taking passport-style photographs of himself in front of each canvas at the end of each work session.

All the paintings in the series bore the same title, "Opalka 1965/1 — ?." "All my work is a single thing, the description from one to infinity," Mr. Opalka once wrote. "A single thing, a single life."

Roman Opalka was born on Aug. 27, 1931, to Polish émigrés in Hocquincourt, in northern France. The family returned to Poland in 1935, only to be deported to Germany after the Nazi invasion.

After being liberated by the United States Army, they returned to Poland, where Mr. Opalka studied lithography at a graphics school before enrolling in the School of Art and Design in Lodz. He later earned a degree from the Academy of Fine Arts in Warsaw and began producing white monochrome paintings.

Five years after executing his first numeral painting, he ceased all other work and devoted himself fulltime to the pursuit of infinity. In 2010, Christie’s sold three of his number paintings as a unit for $1.3 million.

In anticipation of his 80th birthday, several exhibitions were organized in France and Italy and a collection of his self-portraits was published by Éditions Courts et Longues.

Mr. Opalka, who lived in Teillé, near Le Mans, and Venice, is survived by his wife, Marie-Madeleine.

Though his artistic quest might have seemed bloodless and abstract, Mr. Opalka described it, passionately, as a grand metaphor for human existence. “Time as we live it and as we create it embodies our progressive disappearance,” he wrote in an essay in 1987. “We are at the same time alive and in the face of death — that is the mystery of all living beings.”

Roman Opalka [Official Website]
Posted by Mercury at 5:53 AM