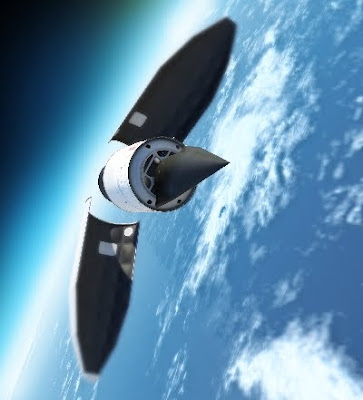 Is there really a need for this?

US military scientists on Thursday launched a hypersonic aircraft but lost contact with the experimental plane in its second test flight, officials said.

The unmanned Falcon Hypersonic Technology Vehicle (HTV-2), designed as a global bomber prototype capable of a mind-boggling 20 times the speed of sound, launched successfully from California aboard a Minotaur IV rocket, according to the Defense Advanced Research Projects Agency.

But after the plane separated from the rocket in the upper reaches of the atmosphere for its "glide" phase, contact was lost, DARPA said.

The agency provided no other details about the flight or how long it had been separated from the rocket.

Last year, scientists lost contact with the HTV-2 after nine minutes in its inaugural flight.

The hypersonic plane, which is supposed to travel at Mach 20, or 13,000 miles (21,000 kilometers) per hour, could potentially provide the US military with a platform for striking targets anywhere on the planet within minutes using conventional weapons.

Such a weapon, still in development, is part of what the US Air Force has dubbed "prompt global strike" capability.

"The ultimate goal is a capability that can reach anywhere in the world in less than an hour," DARPA said on its website.

In theory, the Falcon could travel between New York City and Los Angeles in less than 12 minutes.

Unlike a ballistic missile, a hypersonic vehicle could maneuver and avoid flying along a predictable path. Moreover, analysts say it would not be mistaken for a nuclear missile, avoiding the possibility of triggering a nuclear confrontation.

But Loren Thompson, an analyst at Lexington Institute with links to the defense industry, said there was still much work to be done before the hypersonic bomber becomes a reality.

"The military has a long way to go before hypersonic vehicles are ready for deployment," Thompson told AFP.

After separating from the rocket Thursday, the Falcon undertook some maneuvers before contact was lost, DARPA said.

The test flight plan called for the Falcon to eventually roll and dive into the Pacific Ocean.


Faster than a speeding bullet?--you bet
Posted by Mercury at 4:47 AM