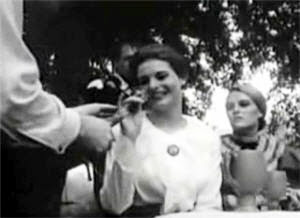 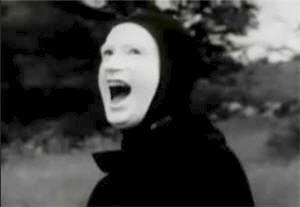 This short film is a parody of some of Ingmar Bergman's best known films, including Wild Strawberries (Smultronstaellet) and The Seventh Seal (Det Sjunde Inseglet). The dialog, seemingly in Swedish, is actually a Swedish-accented fictional language based on English, German, Latin, and Swedish, with most nouns ending in "ska". The principal character, Professor Viktor Sundqvist, 76, is being driven to a lecture at the university, when dove droppings splatter the car's windshield. Detouring at his uncle's old house, his mind wanders back to his youth, when Death came to a family picnic to claim his sister, Inga. Knowing that Death is a gambler, Viktor has Inga challenge Death to a single-point game of badminton for her life. While they are playing, a dove flies above, soiling Death's cape, and distracting him enough to miss the birdie. Having won the game, Inga is free, and she and Viktor run off for a swim in the lake.

This is one of the funniest things I've ever seen in the movies. To reinforce how wonderful The Dove is I just have to say that I saw the film only twice back in 1968 and I still vividly remember scenes and dialogue. This is a brilliant parody of all of Bergman?s films up to that date. It is a perfect parody in both style and photography but the best part is the writing. This is the starkly shot black and white story of Nobel Laureate nuclear physicist Viktor Sundkvist, whom we meet as an old man traveling through the Swedish countryside on a crisp autumn day in his limousine. There are long shadows from the trees and a chill in the air. Answering nature's call he stops his driver near a bucolic out house and sitting down inside discovers a ceramic dove on the floor. The dove reminds him of his lost youth. During the course of the film the young Sundkvist ends up trying to prolong his time on earth by playing a badminton game with the black robed figure of Death. During the game an errant dove interferes with Death's play of the shuttlecock causing Death to curse at the bird. Dialogue in an anglicized pseudo-Swedish is augmented by hilarious subtitles. Examples: Viktor begins his story in voice-over. "They callen me Viktor Sundkvist." The subtitle reads, "My name is Viktor Sundkvist." Later on, a youthful Sundkvist's cigar smoking lesbian sister (Madeline Kahn) offers her brother a stogie, "Phallika symbol," she asks? The subtitle reads, "Would you like a cigar?"


[NOTE: One thinks of many of Benny Hill's routines...the butchering of a foreign language.]