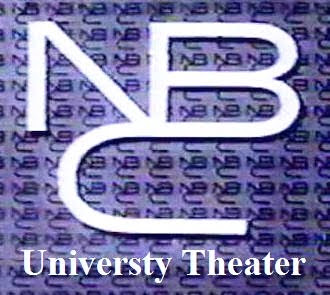 If you've ever desired to read the classics but can't seem to find the time, these shows are a great alternative. Almost all have survived in good audio quality.

In 1944, NBC brought WORLD'S GREAT NOVELS to radio, offering high quality adaptations of some of the great works of literature. Some colleges offered college credit in conjunction with the radio broadcasts. In 1948, the series was re-titled NBC UNIVERSITY THEATER OF THE AIR and production was moved to Hollywood. The first broadcast of the new series aired July 30, 1948. These adaptations were again of high quality and again colleges offered credit in conjunction with the broadcasts.

In 1948, the Peabody was awarded to the NBC University Theatre for "an hour's dramatization of some of our finest novels and short stories... launched as an experiment in July, 1948." The following is a quote taken from the Peabody Award web site:

The response to the first five performances, which included "A Farewell To Arms," by Ernest Hemingway, "Noon Wine," by Katherine Anne Porter, and "Main Street," by Sinclair Lewis, was so vociferous that the network pocketed any misgivings it may have had, moved the show to a more desirable hour, and found the actors and the funds to sustain a series of absorbing and skillfully adapted programs.

Unfortunately, the "University" in the title kept listeners away for fear of the shows being to "high brow". NBC attempted to change this view by removing the "University" from the title for a short time. For the time that it was on the air, there were frequent day of the week, time of day and even program length changes. Despite the lack of broadcast consistency, the shows were consistent in its level of quality. Long after the demise of regularly scheduled dramatic radio in the United States, these shows were still being heard in school classrooms across the nation.

The World's Great Novels was a radio series, directed by Homer Heck, which presented adaptations of classic novels. Broadcast on WMAQ, Chicago, and NBC from 1944 to 1948, it was initially heard Saturdays at 7pm during the first 1944-45 season and then moved to Fridays at 11:30pm. Music for the series was composed by Emil Soderstrom and conducted by Bernard Berquist.

The Chicago-based programs were a production of The NBC University of the Air. Through agreements with the University of Louisville, the University of Tulsa and Washington State College, listeners could receive college credit through accredited, radio-assisted literature correspondence courses. A study guide, The Handbook of the World's Great Novels, was available for 25 cents.

The series began October 28, 1944 with Henry Fielding's Tom Jones, followed by Voltaire's Candide and Jane Austen's Emma. Over the next four years, it aired adaptations of such novels as Kidnapped, The Last of the Mohicans, Thomas Hardy's The Mayor of Casterbridge, Moby-Dick, A Tale of Two Cities and War and Peace. Since this was a half-hour program, many of the novels were serialized in multi-part adaptations of two to six 30-minute episodes.

And, here is a near complete selection .