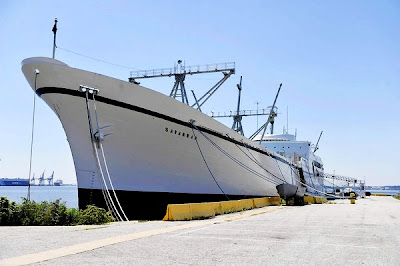 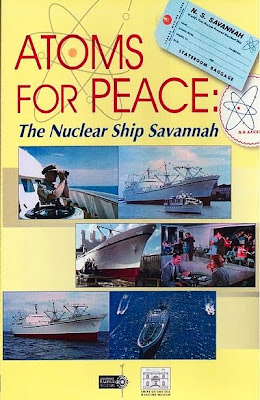 Enthusiasm for the Savannah, a futuristic vessel built to promote the peaceful use of nuclear energy, quickly ran out of steam.

Tucked behind a ruined grain elevator at a pier along an industrial stretch of Baltimore's waterfront lies a still-gleaming white vessel that was once one of the nation's proudest maritime achievements — the only nuclear cargo and passenger ship built in the United States.

She's the Savannah, a floating time capsule from the mid-20th century that has made Baltimore its retirement home.

For a few brief years during the Kennedy and Johnson administrations, the vessel was a nautical superstar, touring the world as an ambassador for the peaceful use of nuclear energy and playing host to royalty. In May 1964, it drew more than 13,000 visitors during a call here.

But the ship faded from the scene like a doo-wop group pushed aside by the Beatles.

"She was a very interesting ship … in her time," said former U.S. Rep. Helen Delich Bentley, who wrote about the Savannah for the Baltimore Sun in the ship's heyday. "She was really the grande dame on the oceans."

Unlike the Constellation, the Savannah is not a floating museum or a tourist attraction. It is berthed not in the Inner Harbor but at out-of-the-way Pier 13, wedged between a coal terminal and a gypsum plant that keep it coated with layers of black and white dust.

Still owned and maintained by the Federal Maritime Administration and regulated by the Nuclear Regulatory Commission, the ship is occasionally opened to visitors. Groups can arrange tours by request, as long as they don't expect too much in the way of air conditioning, elevators or other modern comforts.

Some fans dream of turning the ship into an active cultural and educational treasure, but nobody has figured out where the money would come from.

Erhard W. Koehler, the ship's programs manager, said the Savannah is the only U.S. vessel to have borne the prefix NS, for nuclear ship. He said the vessel was conceived in 1955 by President Eisenhower to promote his vision of a world in which nuclear power was put to nonmilitary use — a program known as Atoms for Peace.

"It was the one thing in the program that fulfilled Eisenhower's vision to promote peaceful uses of nuclear power to the world," said Koehler, who has worked aboard the ship since 1993.

Koehler said nuclear power production was discontinued in 1971 when the ship was taken out of service. Residual radioactivity levels are very low, he said, even though the ship will remain under a regulatory regimen that applies to nuclear power plants until 2031.

"Low risk does not mean no risk," he said.

The Savannah, a sleek 5951/2 feet long and 78 feet wide, was built at a cost of $47.6 million. Bentley covered the story when then-Vice President Richard Nixon's wife, Patricia, waved a radioactive wand to mark the start of work to lay the ship's keel.

The ship was completed in 1961 and generated its first nuclear power late that year. In 1962, the Savannah made its maiden voyage from Savannah, Ga., to Norfolk, Va. Koehler said the ship carried 60 passengers at full capacity.

A visitor touring the Savannah enters the era of the Rat Pack and Jackie Kennedy's pillbox hats, with Jetsons-style furniture and ceiling lamps with atomic power symbols worked into the design. Some artifacts of the era are remarkably well preserved, such as the bar in the passenger lounge and a collection of the ship's china.

Equipment on the bridge is mostly original, including a high captain's chair made for the slightly built original skipper, Koehler said. The galley has an early-generation microwave oven so the ship's cooks could "nuke" food long before that shortcut became commonplace in American homes.

Koehler said the Savannah carried a total of 842 passengers on voyages between 1962 and 1965 despite a series of interruptions because of labor disputes.

But with only 60 spaces, there weren't enough passengers to run the service at a profit, Koehler said. After three years, he said, the Maritime Administration got out of the cruise business.

Stan Wheatley, chief engineer from 1963 to 1964, said the crew was handpicked for diplomatic as well as technical skills. "We had the best of the best. You really couldn't have asked for better people," he said.

By 1970, the Nixon administration decided there was no further need to subsidize a money-losing demonstration project. The Savannah was taken out of service, and America's nuclear-powered merchant shipping was consigned to history's dustbin.

The Savannah's status remains a bit muddled. Koehler says she is not a museum but an active ship — with a small crew of federal employees and contractors who maintain her and watch over the decommissioned reactor.

Wayne Britz, president of the N/S Savannah Assn. and a former second officer who served aboard the ship from 1966 to 1970, said it deserves to be preserved as a cultural and educational resource.

"It's also a beautiful ship, so it would make a very nice addition to some port as a tourist attraction," he said. "We would like it to be Baltimore."

What seems unlikely is any quick comeback for American nuclear-powered commercial vessels.

Wheatley expects Russia to lead the way in using nuclear power for nonmilitary ships. But the former chief engineer, at 85 still active at Cal State Long Beach, hopes a new generation of compact nuclear reactors will put the United States back in the game.

"Hope springs eternal, because I still think it's the way to go," he said.

Nuclear Ship Savannah Photographs
Posted by Mercury at 5:26 AM

Once Upon A Nuclear Ship, a new documentary by filmmaker Thomas Michael Conner, tells the story of the NS Savannah the world’s first nuclear powered merchant ship that was once the diamond in the crown of the US merchant fleet.

Imagined by President Dwight D. Eisenhower in 1955 and built by the New York Shipbuilding Corp in Camden NJ from 1957 to 1962, the Savannah sailed the oceans of the world for 9 years before being taken out of service in 1971. In her brief lifetime she visited 77 ports of call hosting 1.5 million visitors and proved that a nuclear powered merchant ship carrying cargo and passengers was a viable option to smokestacks spewing soot and other contaminants into the air and laid the groundwork for a future that never came to be.

It’s a story best told by the men who “were there when it happened” and although many of these pioneering seamen have sailed into the sunset, Conner tracked down some key players and let them tell the story in their own words. It’s a story he too knows well because he was a member of the health physics (radiation protection) staff and was there from the day the reactor split it’s first atom then sailed on the ship until the end of 1964. The NS Savannah was the only merchant ship requiring a special department for the assessment of radiological hazards.

Once Upon A Nuclear Ship follows the Savannah through all of her trials and tribulations from the keel laying to her decommissioning and abandonment to her resurrection in 2006.

Today, the NS Savannah sits beside a dock in Baltimore MD while a small group of passionate people led by Erhard Koehler and Jon Stouky of the US Maritime Administration are busy preserving the history and technological know how that produced the Savannah in the first place. Stouky like Conner was involved with the Savannah since the New York Ship days in Camden and is currently the project’s Nuclear Advisor. Future plans include using the ship as a Maritime Museum.

Once Upon A Nuclear Ship is being released on DVD through TCL Communications, Inc and is available on it’s own website http://nssavannahdocumentary.com. Future plans include making it available via download or streaming.