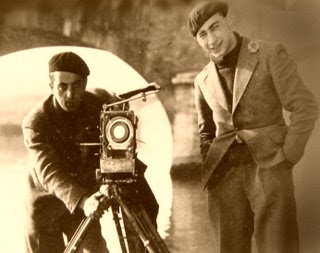 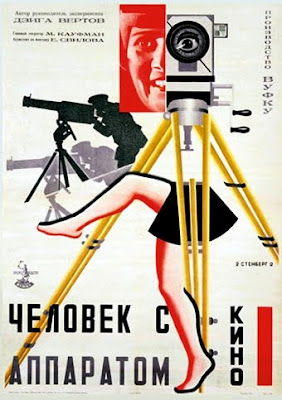 Man with a Movie Camera

Man with a Movie Camera (1929) is an experimental documentary film by the innovative Russian director Dziga Vertov.

Man with a Movie Camera is in many ways a film about film itself. Vertov was attempting to make a universal film, one that relied exclusively on film language to convey its message. As stated in the foreword to the film, ‘This experimental work aims at creating a truly international absolute language of cinema based on its total separation from the language of theatre and literature.’ This urge to work exclusively within the parameters of one’s own medium is a central characteristic of Modernist culture.

Film language in this case means that there are no textual inter-titles or theatrical conventions. Instead, the shots are organized in a rhythmic montage style to convey a theme, in this case the daily life of Soviet citizens and the role of the cameraman in that recording life. In his book on the film, Vlada Petric interprets the inclusion of the camera itself in the film both as a way of mechanizing humans and humanizing machines: ‘by comparing industrial movements with those of athletes, Vertov suggests that machines also possess an expressive visual beauty. Similarly, the motion picture apparatus is equated with the human being as it suddenly begins to ‘walk’ on its own accord.’

Because of the specific time and place Vertov occupied in the new Communist Russia, all his films had to function as propaganda. By including the elements of filmmaking in Man with a Movie Camera, Vertov attempted to establish his occupation in a role supportive of the Communist regime. Man with a Movie Camera depicts the daily life of citizens of the Soviet Union, contrasting bourgeois luxury with worker industriousness. The cameraman is clearly identified with the workers rather than the bourgeoisie from the way he rises early to begin his work, as do the women sweeping the streets, and also by his constant movement throughout the film, which contrasts with the leisurely lifestyles of the upper class.

Vertov believed that film was capable of showing what he called ‘kinopravda’ (film-truth). He declared, ‘The newsreel is organised from bits of life into a theme, and not the reverse. This also means that Kinopravda does not order life to proceed according to a writer’s scenario, but observes and records life as it is, and only then draws conclusions from these observations.’

Significantly, Vertov does not call this theme ‘truth’ in the absolute sense, but film-truth, acknowledging that creative/manipulative possibilities exist even in documentary filmmaking. Ultimately, Man with a Movie Camera is a film that champions the artistry of film by mixing images of both the process and the product of filming a day in the life of a Ukrainian city.

Man with a Movie Camera [Wikipedia]

Man with a Movie Camera