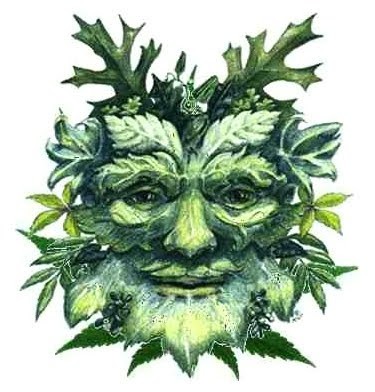 The first literary reference in English to the Green Man comes in 1638 but his carved or painted heads and sometimes whole figures of wild, shaggy men of the woods are scattered throughout the iconography of mediaeval Europe. Unlike many of the devil-monsters whose effigies menace and grimace around the outsides of mediaeval churches, the Green Man was allowed inside.

Jack-in-the-Green, he appears in mummings and folk-dancings that persist to this day. He is an anarchic, jovial, but also potentially disturbing figure, who offers a sly but explicit threat towards the girls.

The Green Man may well embody some survival of ancient nature worship. There are strong suggestions of a fertility cult in the antics of Jack and his pursuit of the girls. Equally there are suggestions of lawless figures on the fringes of society, sidling in to play seditious roles at a public occasion - camouflaged poachers who prowl the royal forests, Robin Hood and his band of outlaws in their Lincoln green tunics.

The Green Man is the patron of subversives and survivors. He is belived to be a Celtic symbol of creative fertility in nature. He is not at all quaint and should not be taken lightly.


Robin Hood & Sherwood Forest
Posted by Mercury at 7:29 AM