Faster than a speeding bullet?--you bet 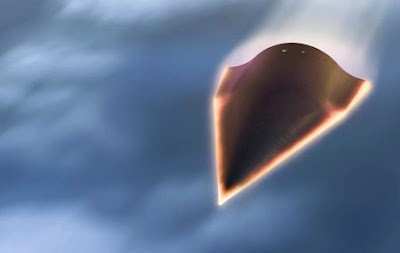 An experimental, arrowhead-shaped aircraft that could reach blistering speeds of 13,000 mph above the Pacific Ocean is set to blast off Wednesday from Vandenberg Air Force Base, northwest of Santa Barbara.

The flight is slated to test new technology that would provide the Pentagon a lightning-fast vehicle, capable of delivering a military strike anywhere in the world in less than an hour.

The unmanned aircraft, dubbed Falcon Hypersonic Technology Vehicle 2, is scheduled to be launched at 7 a.m. PDT into the upper reaches of the Earth's atmosphere aboard an eight-story Minotaur IV rocket, made by Orbital Sciences Corp.

The aircraft will then separate, screech back toward Earth, level out and glide above the Pacific at 20 times the speed of sound, or Mach 20.

To give you an idea of how fast that is: an aircraft at that speed would zip from Los Angeles to New York in less than 12 minutes.

The aircraft is expected to splash down about half an hour later and sink near Kwajalein Atoll, about 4,000 miles from Vandenberg.

The launch Wednesday will be the second flight of the Falcon. The first flight, which took place in April 2010, ended prematurely with only 9 minutes of flight time.

The U.S. Defense Advanced Research Projects Agency, which is funding the program, said the first flight was "used to improve aerodynamic models and to optimize the vehicle design and trajectory for flight two."

Sustaining hypersonic flight, or speeds beyond Mach 5, has been extremely difficult for aeronautical engineers to perfect over the years.

In June, the U.S. Air Force had to prematurely end a test flight of its experimental X-51 WaveRider plane when a lapse in airflow to the jet engine caused a shutdown.

The second flight of the Falcon Hypersonic Technology Vehicle 2, which is built by Lockheed Martin Corp., is set to be its last -- unless the government provides more funding. And unlike many rocket launches these days, it's not set to be webcast.