Messy machine from the past...the mimeograph 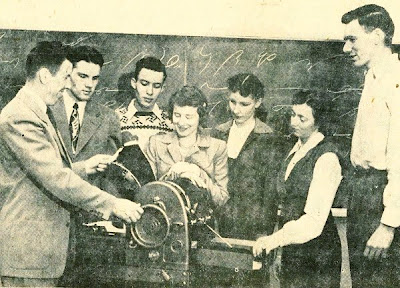 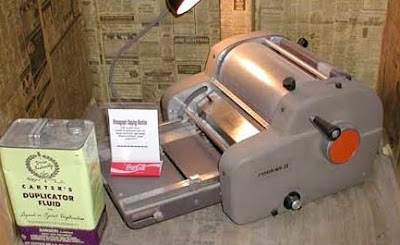 Actually, they were great for short-run handouts...and they could be messy too.

1876: Thomas Edison receives a patent for the mimeograph. It will dominate the world of small-press-run publication for a century.

If you needed just a few copies of a document, you used carbon paper. If you needed thousands (and had the time and the budget), you could send it to a print shop for typesetting and publication.

But if you needed something in between, say 30 copies for a classroom handout (or test!) or 500 or 1,000 for a church bulletin or incendiary revolutionary poster, you had the mimeograph.

Those of us who are old enough to remember the mimeo can probably conjure up the smell of its ink — especially ink for the Dittograph or spirit duplicator, which handled the smaller press runs. Those who actually used to “run things off” on the machines probably remember the look and feel of its sometimes-delicate stencils.

Those who are younger may not even know how the word is pronounced. It’s MIM-EE-oh-graf, not MYME-oh-graf or MEEM-oh-graf. Ask your parents.

The process is simple: Cut a stencil, push ink through the holes onto paper, and repeat. The business model is also simple: Sell the machine, sell the stencils, sell the ink — maybe even sell the paper, but there might be competition there.

Edison’s 1876 patent covered a flatbed duplicating press and an electric pen for cutting stencils. Chicago inventor Albert Blake Dick improved the stencils while experimenting with wax paper and merged his efforts with Edison’s. The A.B. Dick Co. released the Model 0 Flatbed Duplicator in 1887. It sold for $12 (about $284 in today’s money).

If you didn’t want to use the electric pen, you could try cutting a stencil with one of those newfangled typewriters. But hand drawing of stencils persisted well into the 20th century for diagrams of sentences and diagrams of scientific concepts, as well as mathematical formulas that were beyond the scope of the typewriter keyboard.

Later models replaced Edison’s original flatbed press and hand roller for the ink with a rotating cylinder and an automatic feed from the ink reservoir. Deluxe models included an electric motor. You could also get cheaper ones that you had to crank by hand.

The A.B. Dick Co. believes almost every U.S. military personnel order of World War II was run off on one of its machines. And so central is the mimeograph to the history of 20th-century education that the Columbia University Teachers College planned a special library exhibit on the mimeograph in 2008.

We saw that on the web, not on a mimeographed flyer.