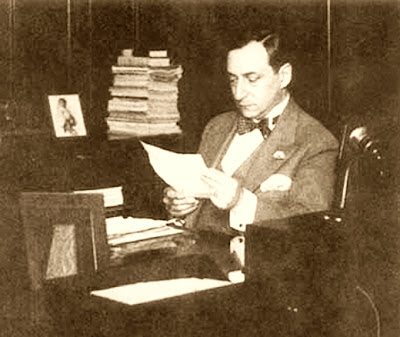 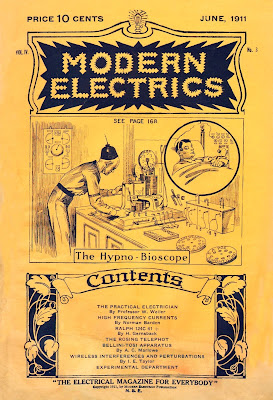 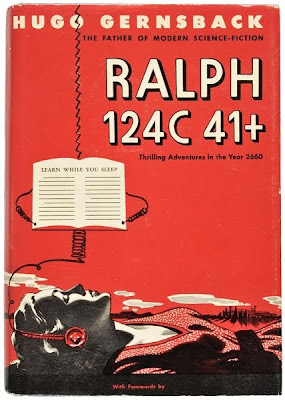 Hugo Gernsback was an "American inventor (80 patents) and publisher who was largely responsible for the establishment of science fiction as an independent literary form. In 1926, Hugo Gernsback was the owner of a magazine called Modern Electrics. One day, he found that he had a blank spot in his publication, so he dashed off the first chapter of series called "Ralph 124C 41+." "Ralph" was an amazing success. The 12-part story was filled with all kinds of wild inventions unheard of in 1926, including television (he is credited with introducing this word), fluorescent lighting, juke boxes, solar energy, television, microfilm, vending machines, and a device we now call radar."

By the year 2660, science has transformed and conquered the world, rescuing humanity from itself. Spectacular inventions from the farthest reaches of space and deep beneath the earth are available to meet every need, providing antidotes to individual troubles and social ills. Inventors are highly prized and respected, and they are jealously protected and lavishly cared for by world governments. That support and acclaim, however—as the most brilliant of scientists, Ralph 124C 41+, discovers—is not without its price.

As the vibrations died down in the laboratory the big man arose from the glass chair and viewed the complicated apparatus on the table. It was complete to the last detail. He glanced at the calendar. It was September 1st in the year 2660. Tomorrow was to be a big and busy day for him, for it was to witness the final phase of the three-year experiment. He yawned and stretched himself to his full height, revealing a physique much larger than that of the average man of his times and approaching that of the huge Martians.

His physical superiority, however, was as nothing compared to his gigantic mind. He was Ralph 124C 41+, one of the greatest living scientists and one of ten men on the whole planet earth permitted to use the Plus sign after his name. Stepping to the Telephot on the side of the wall, he pressed a group of buttons and in a few minutes the faceplate of the Telephot became luminous, revealing the face of a clean-shaven man about thirty, a pleasant but serious face.

As soon as he recognized the face of Ralph in his own Telephot, he smiled and said, "Hello, Ralph." "Hello, Edward. I wanted to ask you if you could come over to the laboratory tomorrow morning. I have something unusually interesting to show you. Look!"

He stepped to one side of his instrument so that his friend could see the apparatus on the table about ten feet from the Telephot faceplate.

Edward came closer to his own faceplate, in order that he might see further into the laboratory.

At this moment the voice ceased and Ralph's faceplate became clear. Somewhere in the Teleservice company's central office the connection had been broken. After several vain efforts to restore it, Ralph was about to give up in disgust and leave the Telephot when the instrument began to glow again. But instead of the face of his friend, there appeared that of a vivacious beautiful girl. She was in an evening dress and behind her on a table stood a lighted lamp.

Startled at the face of an utter stranger, an unconscious "Oh!" escaped her lips, to which Ralph replied: "I beg your pardon, but "Central" seems to have made another mistake. I shall certainly have to make a complaint about the service."

Her reply indicated that the mistake of "Central" was a little out of the ordinary, for he had been swung onto the Intercontinental Service as he at once understood when she said, "Pardon Monsieur, je ne comprends pas!" He immediately turned the all shining disk of the Language Rectifier on his instrument till the pointer rested on "French."

"The service mistakes are very annoying," he heard her say in perfect English. Realizing, however, that she was hardly being courteous to the pleasant-looking young man who was smiling at her, she added, "But sometimes Central's "mistakes" may be forgiven, depending, of course, on the patience and courtesy of the other person involved."

This, Ralph appreciated, was an attempt at mollification with perhaps a touch of coquetry. Nevertheless he bowed in acknowledgment of the pretty speech. She was now closer to the faceplate and was looking with curious eyes at the details of the laboratory — one of the finest in the world. "What a strange place! What is it, and where are you?" she asked naively. "New York," he drawled.

That's a long way from here," she said brightly." "I wonder if you know where I am?" "I can make a pretty shrewd guess," he returned. "To begin with, before I rectified your speech, you spoke French. Secondly, you have a lamp burning in your room although it is only four o'clock in the afternoon her in New York. You also wear an evening dress. It must be evening, and inasmuch as the clock on your mantelpiece points to nine, I would say you are in France, as New York time is five hours ahead of French time."

"Clever, but not quite right. I am not French, nor do I live in France. I am Swiss and I live in western Switzerland. Swiss time, you know, is almost the same as French time." Both laughed. Suddenly she said: "Your face looks familiar to me. It seems I must have seen you before."

"That is possible," he admitted, somewhat embarrassed. "You have perhaps seen one of my pictures." "How stupid of me!" she exclaimed. "Why, of course! I should have recognized you immediately. You are the great American inventor, "Ralph 124C 41+." He again smiled and she continued: "How interesting your work must be, and just think how perfectly lovely that I should be so fortunate as to make your acquaintance in this manner. Fancy, the great Ralph 124C 41+, who always denies himself to society." She hesitated, and then, impulsively : "I wonder if it would be too much to ask you for your autograph?"

Much to his astonishment, Ralph found himself pleased with the request. Autograph-hunting women he usually dismissed with a curt refusal. "Certainly, he answered, "but if seems only fair that I should know to whom I am giving it."

"Oh," she said, blushing a little, and then, with dancing eyes, "Why?"

"Because," replied Ralph, with an audacity that surprised himself, "I don't want to be put to the necessity of calling up all Switzerland to find you again."

Ralph then attached the Telautograph to his Telephot while the girl did the same. When both instruments were connected, he signed his name and he saw his signature appear simultaneously on the machine in Switzerland.

"Thank you so much!" she exclaimed, and added, "I am really proud to have your autograph. From what I have heard of you, this is the first you have ever given to a lady. Am I right?" she asked. "You are perfectly correct, and what is more it affords me a very great pleasure indeed to present it to you."

"How lovely," she said as she held up the autograph, "I have never seen an original signature with the +, for there are only ten of you who have it on this planet, and now to actually have one seems almost unbelievable. . . ."

The titular hero—a reclusive yet famous mental giant and strapping physical specimen, "one of the greatest living scientists and one of the ten men on the whole planet earth [sic] permitted to use the Plus sign after his name"—is encountered vividly in the opening sentences of the first chapter. Seated in his laboratory in the year 2660, Ralph is announcing—via picturephone connection to a comrade—yet another miraculous discovery. Suddenly, a glitch in the phone service puts him face to face with an unknown beautiful woman in Switzerland, Alice 212B 423. After some coquettish interplay, Alice suddenly finds herself at the mercy of a dreaded avalanche, which Ralph manages to vaporize long-distance, with Alice's plucky help.

This chance "meeting" leads to an encounter in the flesh, when Alice and her father arrive in New York to thank Ralph personally. The sheltered superman, a ward of the state, formerly disdainful of physical and emotional love, finds himself falling head over heels for Alice. He agrees to be her tour guide while she is in America. During the next several weeks (covered in Chapters II through IX), they visit scientifically run farms, floating vacation resorts, an anti-gravitational circus, stores, solar power installations, restaurants and a host of other institutions and places chosen by Gernsback to illuminate his future. Ralph lectures his new attentive girlfriend inexhaustibly for the whole tour, including a long explanation of the world's financial system.

But their idyll features more than intellectual discourse and shy courting. Ralph and Alice have jealous enemies. Two spurned suitors—the human Fernand 60O 10 and the humanoid Martian Llysanorh' CK 1618—are determined to steal Alice away from Ralph. Only thanks to Ralph's bravery and ingenuity does Alice narrowly escape an attack in Manhattan from an invisible assailant who eludes capture. A peaceful interval follows. But then Alice is kidnapped away into space, and Ralph must rescue her, defying the orders of the government, which fears for the safety of its prize superman. In Chapters X through XVI, Ralph pursues first Fernand's fleeing spaceship, then that of Llysanorh'. Alice's ultimate salvation seems doubtful right up to the end, and indeed Ralph reverses a tragic outcome only with scientific prowess and personal sacrifice back on Earth, insuring a happy ending for the lovers.

First serialized in the pages of Hugo Gernsback's own magazine, Modern Electrics from April 1911, to March 1912, then printed in book form in 1925, this classic of futuristic fiction predates the real creation of the SF genre, born shortly thereafter with the first issue of Gernsback's Amazing Stories in April 1926. (In a curious twist of fate, this edition bears an introduction from pioneer Jack Williamson, whose first editor was Gernsback himself.)

At one time it was fashionable to deride Gernsback's novel—often without even having read it—as a primitive exercise in speculation, long since superseded by more sophisticated works. And while it's true that the novel would never pass muster as an original in today's scene, it's wrong to dismiss it as worthless. Here Gernsback laid so many templates for all that science fiction could accomplish, as well as codifying a few of the genre's more notorious sins.

Gernsback's style is transparent and concise. Characterization is minimal but more than sufficient. Explanations are delivered in logical soundbites illustrated by vivid comparisons. His speculations hit the mark more often than not. In the '50s, perhaps, cityscapes full of rollerbladers and acres full of solar collectors might have looked silly. Today, not so. And Gernsback's early concern for the natural environment balances his faith in the virtues and capabilities of technology. True, Ralph relies too easily on cobbling new inventions together instantly.

True, outdated paradigms—mainly the cosmic ether that was once thought to permeate space—are taken for granted. True, Gernsback equates easy achievements (illuminated ballparks) with difficult ones (antigravity and invisibility). True, he thinks that human nature is infinitely plastic and that people will unfailingly do what is deemed "good" for them by the authorities.

But on every page of this book—the plotting of which is masterful, including the climactic usage of a scientific technique introduced early on, then deliberately tucked into the background—the reader senses an earnestly striving mind at work, a scientific spirit for whom communication and education mattered above all.

Despite certain campy elements, I enjoyed this book from start to finish. We all owe Gernsback more than we can easily confess.