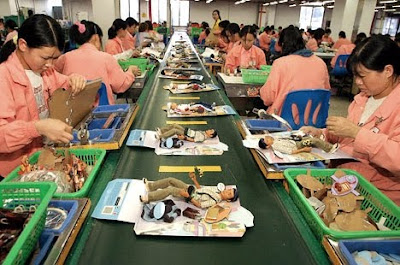 Disney's best-selling Cars toys are being made in a factory in China that uses child labour and forces staff to do three times the amount of overtime allowed by law, according to an investigation.

One worker reportedly killed herself after being repeatedly shouted at by bosses. Others cited worries over poisonous chemicals. Disney has now launched its own investigation.

It is claimed some of the 6,000 employees have to work an extra 120 hours every month to meet demand from western shops for the latest toys.

The factory, called Sturdy Products, makes toys for the giant Mattel company, which last month announced quarterly profits of £48m on the back of strong sales of Barbie dolls and Cars 2 toys. Sturdy Products, in the city of Shenzhen, also makes toys for US superstore chain Walmart. Among the brands produced are the Thomas the Tank Engine range, Matchbox cars, Cars, Toy Story, Barbie and Fisher Price products, Scrabble and the Hot Wheels sets.

The undercover investigation was carried out with the help of human rights group Sacom (Students and Scholars Against Corporate Misbehaviour), which helped to expose abuses in Apple's Foxconn plant in China this year.

Workers were interviewed away from the factory, and an investigator then spent a month working inside it to gather more information. He found evidence of the use of child labour and illegal working hours, along with concerns over the use of poisonous chemicals.

Sacom's accusations against the factory include:

1. The employment of a 14-year-old. Staff also reported the presence of other child workers, according to the investigator.

2. Routine excessive overtime. Employees produced a "voluntary" document they said they had to sign agreeing to work beyond the maximum overtime legal limit of 36 hours a month, along with wage slips that suggested they were averaging 120 hours of overtime a month.

3. A harsh working environment in which workers complained of mistreatment by management. One worker injured on the production line was shouted at and ordered back to work despite needing medical treatment.

4. Concerns about the chemicals in use and poor ventilation. Employees claimed three workers had fallen ill. They said they had to hide pots of adhesive and thinners during audits of the factory by its client companies.

5. They also claimed that they were paid by the factory to give misleading answers during audits and that they were fined for failing to hit targets. The calculation of wages for different workers was described by Sacom as arbitrary.

Concerns were raised about conditions at Sturdy Products when a 45-year-old female employee, Hu Nianzhen, jumped to her death from a factory building in May after she was allegedly shouted at by managers.

Colleagues subsequently described the environment in the factory as tense and complained about the demanding workload. "A female worker committed suicide," one said, "because she was always scolded. However, I feel helpless because it is not easy for me to find another job."

The allegations are sure to concern many parents whose children are pestering them to buy the extensive range of Cars 2 toys launched to coincide with the movie, which hit UK cinema screens in July. Cars 2 has so far grossed £303m worldwide, overtaking the original movie despite being panned by critics. The poor reviews have not hindered sales of the merchandise, which Disney expects to exceed the £1.7bn spent last year on Toy Story 3 merchandise. Cars 2 toys will compete with Transformers and Smurfs items as the must-have Christmas toys.

But Sacom said that parents should think twice before buying the toys. A spokeswoman said: "Mattel, Walmart and Disney, the renowned toy companies, always claim they strictly comply with local laws and adhere to their respective code of conduct. The rampant violations at Sturdy Products, including excessive overtime, arbitrary wages, unfair punitive fines, child labour and negligence of occupational health, prove that the pledges are empty statements. There is no effective enforcement mechanism and remedies for workers at all."

She said the violations exposed the failings of the International Council of Toy Industries, which is supposed to police the industry.

"Consumers could never expect that the lovely toys which bring joy to children are manufactured in such deplorable conditions. They should convey messages to toy companies including Mattel, Walmart and Disney to launch remedial actions to compensate the wronged workers. Without remedies, there is no cost for labour rights violations."

She said the companies should already have been aware of the dangers of dealing with Sturdy Products after a previous investigation in 2007 uncovered similar problems. That investigation also found a six-day working week, with staff working up to 288 hours a month. During peak periods there was a compulsory seven-day week and the company was found to be failing to pay the minimum wage. Investigators said that some employees had attempted to raise awareness of the abuses by setting up their own group to inspire colleagues to fight for their rights.

Walmart issued a statement in which it said: "As soon as we learned of the allegations of human rights abuses at the Sturdy Products factory, we immediately launched an investigation. We are also in contact with the International Council of Toy Industries, a worldwide toy industry organisation that is also investigating this issue. We take reports like this very seriously and we will implement a corrective action plan if our investigations confirm any of the findings.

"We remain committed to sourcing merchandise that is produced responsibly by suppliers that adhere to Walmart's rigorous Standards for Suppliers code of conduct."

Disney said: "We take these matters impacting our licensees and business partners very seriously and will continue to evaluate this situation based upon the information available to us."

Mattel declined to comment directly on any of the allegations other than to note that the company was "deeply saddened" by the suicide but that, while it was "very tragic", it was an isolated event and local authorities had found nothing suspicious about the circumstances.

The company said it had carried out a detailed investigation. It said it was committed to working collaboratively through the International Council of Toy Industries' Care (Caring, Awareness, Responsible, Ethical) process "to achieve continuous improvements in factory working conditions".

Sacom's findings brought a rebuke from the International Council of Toy Industries' Care Foundation. "We are the first to concede that much more work lies ahead of us, but we refuse to accept the sensationalist, media-oriented declarations of any group, especially when they are carping and filled with incorrect information. It is simply counter-productive," the foundation said.

"The plain truth is that workers in many toy factories in China are better off now than they were before and that this is due in considerable part to the ICTI Care Process."