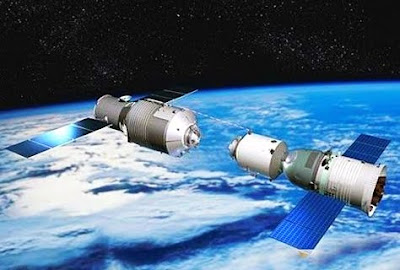 Wanna buy a spaceship? No, you can't have the real thing. But you can buy a model at a reasonable price. That's been the driving force behind a strongly entrenched space modeling industry for decades.

How many thousands of scale-model American space shuttles have been sold for every real one that was produced? What about the Apollo lunar module?

China also produces models of its own space hardware. The nation has a well-established modeling industry that pumps out plastic kits of tanks, ships and planes, in addition to replicas of their own rockets and Shenzhou spacecraft.

China also sells more impressive (and more expensive) models of its spacecraft in shiny metal. There are variants to show the different designs of different missions, such as Shenzhous 5, 6, and 7. All are depicted in fairly good technical detail.

You can also get models of the Chang'e 1 lunar orbiter, also made in metal. They make nice desktop ornaments. Then there's the cheap plastic Long March 2F launch vehicle that's actually a pen. Pull off the payload fairing, and start writing!

Now to Tiangong, China's new space laboratory. It would be nice to add a model of this spacecraft to my collection. So far, the Chinese aren't selling them. I wonder why.

Tiangong was announced years ago. The basic design has been on the record for a long time. China is committed to launching this spacecraft. It's about time we could get an official replica.

It could be the case that China is waiting for a successful launch before it sells models of Tiangong. If so, we hopefully won't have too long to wait. But what if they don't appear?

There could be another explanation. Perhaps people just aren't buying enough space models to justify the production costs. China produces very nice models of its space hardware for exhibitions.

These models are individually crafted, and probably quite expensive to produce. But you can justify the cost by producing small numbers, and re-using them for different exhibitions in different places.

Mass-production of cheaper models would require large sales. Does China expect a rush in demand for Tiangong models or toys?

If sales of earlier model spacecraft were not large, it could have deterred China from producing more models. There's no easy way to get reliable data on this, or know what is really going on. But it's plausible.

There will almost certainly be commemorative coins, stamps and buttons to celebrate the launch of Tiangong. Dedicated collectors will snap up this paraphernalia. But will Tiangong resonate with the general public? There will be plenty of people who would love a model of Tiangong, both inside and outside of China. I hope we can get them soon.


Vintage model kits...space oriented
Posted by Mercury at 5:55 AM