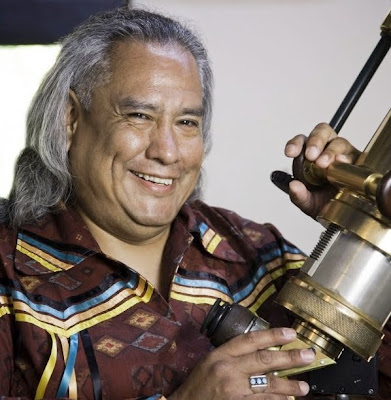 Indian Country Today Media Network
Although the job of the astronomer is a lot less lonely than it used to be—they spend far fewer long nights looking into telescopes in remote observatories and far more days in laboratories and research centers crunching numbers, analyzing data and collaborating with other astronomers—Dennis Lamenti (Navajo/Zuni) has had to deal with a different kind of loneliness: being one among too few Native American astronomers. In fact, as far as he knows, he is the only one in the contiguous United States with or working toward a Ph.D. in astronomy.

Lamenti, who grew up near Tuba City, Arizona on the Navajo Nation Reservation, did not go to college immediately after high school. He passed his 20s and 30s in the corporate world and looking for meaning in his life, which he found in the 1990s when he started participating in Navajo ceremonies. He decided he wanted to better know his Creator. “And the way to do that for me was to learn more about the creation,” he said.

The physics and mathematics model appealed to Lamenti, so, in 2002, at almost 45 years old, he enrolled at San Francisco State University (SFSU) to pursue a bachelor’s degree in physics. He gravitated toward astronomy in his sophomore year when he was accepted into an internship program at Lawrence Berkeley National Laboratory and placed into its astrophysics division. Now 53, Lamenti is enrolled at Indiana University-Bloomington (IU), where he has completed his master’s and has about two years to go on his Ph.D. in astronomy.

His educational path has not been easy. Lamenti has been far from home and the Navajo ways for almost a decade. He has been in colleges with hardly any Indian students. While enrolled at SFSU, he said he wanted to talk to other Native American students who were in physics, to work out their struggles, like cultural differences, spiritual conflicts and crossed value boundaries, but could find none.

“There was a certain type of loneliness, but it was also coupled with my own bias of being an older person. Most of my colleagues are half my age. I tended to isolate myself,” he said.

Lamenti overcame those challenges by being willing to change. He said he had to pray and connect with people, whether it was with other Indians or just other people around him. One way he connected with other Indians was by helping to create IU’s First Nations Educational and Cultural Center in 2007, a place that IU’s Native American student population—then numbering 324, but down to 277 last fall—can go for support and information.

He does not know where he will end up once his Ph.D. is done. He enjoys the research, and has done plenty of it. He has worked at the Nearby Supernova Factory assisting in the development of an algorithm for sky transparency at the observatory on Mauna Kea in Hawaii. He also spent two summers at Fermilab in Illinois creating a portal for observers to examine nightly observations of supernovae candidates for the Sloan Digital Sky Survey II, the second phase of an international, multi-institutional, three-phase effort to create a map of the universe, and at IU, he has studied the spectrum of giant stars in globular clusters. He is currently examining radial velocities of stars in the Beehive, an open star cluster in the Milky Way galaxy some 600 light years from Earth.

But Lamenti also likes the idea of teaching, particularly going back home to educate Navajos on the wonders of the final frontier and perhaps inspire some to pursue careers in astronomy. He believes indigenous thought is needed for a holistic approach to science and understanding the universe.

Lamenti is not alone with his desire to see more Native American astronomers. There are a couple of programs out there created to attract more into the field. One is the Navajo-Hopi Astronomy Outreach Program at Lowell Observatory in northern Arizona. The program, started about 15 years ago, pairs astronomers with elementary and secondary school teachers at tribal schools. The astronomers go to the schools several times during the year to discuss astronomy topics and engage the students with hands-on activities. Five schools participated in the program last year, and three are on board this year.

The Lowell Observatory team tries to make the program culturally relevant. Deidre Hunter, co-founder, administrator and astronomer partner of Lowell’s program, said it collaborates with a Navajo tribal educator who shares traditional star stories with the students. Lowell was also collaborating with a Hopi educator, but he no longer participates. He did, however, develop lessons for the program that incorporate Hopi words for cosmic terms, like muuyaw for moon, soohu for star and soongwuga for Milky Way. Lowell also tries to make it fun, such as with star parties, when the astronomers setup telescopes on school property at night to give students and their families a chance to explore the skies with their own eyes, and overnight fieldtrips to the observatory.

The Lowell program was modeled after Project ASTRO, a national program launched by the Astronomical Society of the Pacific in 1994 that today boasts more than 500 teacher-astronomer partnerships. A Project ASTRO at the National Optical Astronomy Observatory in Tucson, Arizona, works with Indian Oasis, a K-8 school on the Tohono O’odham Reservation, which is home to Kitt Peak National Observatory.

It is difficult to gauge how effective these programs are in encouraging Native Americans to opt for the astronomy profession. Chuck Wendt, who manages Lowell’s outreach and fundraising departments, said, “Ideally, you want to get kids interested in astronomy in college. That is a really good goal. Hopefully, that happens. Even if it that does not happen, it opens a lot of eyes for kids who would normally not be exposed to that kind of thing.”

Lamenti would like to make himself available to any Native American students interested in astronomy or Native students who would like to discuss their challenges, need advice getting into graduate school, or just staying in school. He can be contacted through Indiana University’s webpage.
Posted by Mercury at 2:48 PM

Congratulations to you, Dennis! I am so pleased to hear of your stellar (pun intended!)success, and wish you well in all that you do. I was a Project ASTRO Coordinator at UW in Seattle for 6 years; it's an outstanding program and I'm so glad to hear that you are connected in the context of your outreach efforts.