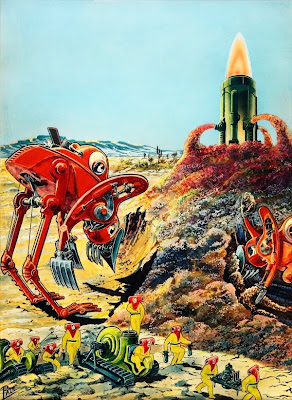 A terrific 1929 painting for the cover of Science Wonder Stories by Frank R Paul (“the undisputed king of the pulp artists” – Arthur C Clarke) featuring a crew of proto-Katamari Damaci miners is estimated to go for between $15,000 and $20,000.

Heritage Auctions is auctioning off the Jerry Weist Collection of Science Fiction and Fantasy Art and Books on September 11 in Beverly Hills. Some amazing pieces of art and artifacts are being offered. 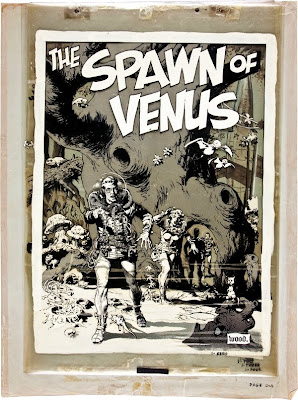 What kind of savage wouldn't want a complete 8-page story by the inimitable Wally Wood? According to the catalog it's a "reworked 8-page version of the Weird Science #6 classic, 'The Spawn of Venus,'slated for a never-published third issue. The art is rendered on Craftint art paper as well as multiple pieces of acetate, each piece representing a 'level' of art. The pieces were then stacked together, with eye-popping results -- the 3-D effect is striking. Unlike the previous issues, this story was actually rendered in six levels of depth, rather than the previous standard of four levels. This science fiction masterwork finally saw print in Wally Wood's own prozine, Witzend #6 in 1969." 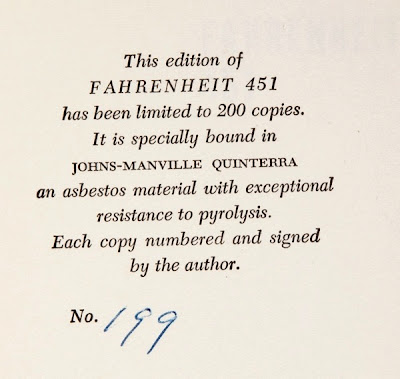 Only 200 copies of Ray Bradbury's novel Fahrenheit 451 were printed with an asbestos cover. What lucky future mesothelioma victim is going to get this copy, signed by the author? Opening bid is $3000.

Jerry Weist, pioneering comics fan, scholar, retailer and author, died Jan. 7 at the age of 61, reportedly of mulitple myeloma cancer. According to SFScope friend Andrew Porter and the PulpMags mailing list, Weist had been battling cancer for several years.

Weist first began collecting comic books and science fiction in 1958, when he picked up the second issue of Famous Monsters of Filmland at his father’s grocery store. According to Bill Schelly’s Founders of Fandom, Weist produced his own monster fanzines in the early 1960s, attended his first World Science Fiction Convention in Cleveland in 1966, and in 1967 edited and published the groundbreaking EC Fanzine Squa Tront. He moved to New York City in 1972 and established himself as an artist on the Lower East Side, eventually having one-man shows at galleries in SoHo, and then moved to Boston.

Weist opened The Million Year Picnic in the summer of 1974, one of the first specialty comic stores in North America. He has worked with Al Feldstein, Jerry Siegel, Murphy Anderson, James Steranko, Stan Lee, Jack Kirby, Dick Ayers, Bill Gaines, Ray Bradbury, Roy Thomas, Burne Hogarth, Danton Burroughs, Frank Frazetta, Robert Crumb and a host of other professionals in the comics field for the past 20 years in helping them sell their artwork or collectibles.

After spending 10 years in retail, Weist moved back to New York and convinced Sotheby’s in 1991 to mount the first major Comic Book and Comic Art auction. He served as Sotheby’s comics consultant from 1990-2001, launching the first world-class market auctions. He has appeared on national television and in USA Today and The Wall Street Journal and has been quoted in numerous other sources for comics history and auction results. He is one of the first five members of the Certified Guaranty Company, and had just become one of the only independent dealers in America to be granted status enough to be included in the new C.G.C. “Signature” series comic labels.

Weist has a lifetime of experience grading, cataloging, writing historical articles, identifying restoration on comics, distinguishing original artwork from fakes, making finds that become “pedigree” comics collections — and a wider range of experience with the comic book and comic art mediums than many other professionals. He is the author of Bradbury: Illustrated Life, a Journey to Far Metaphor (William Morrow, 2002), Original Comic Art: Identification and Price Guide (The confident collector) (Avon 1992), 100 Greatest Comic Books (Whitman 2004), Frank R. Paul: Father of Science Fiction Art (with Stephen D. Korshak and Roger Hill) (Book Sales 2010), and The Comic Art Price Guide (Krause 2000) and the second updated edition (Arcturian 2000). Prior to his death, he reportedly completed the third edition of The Comic Art Price Guide, which is scheduled to appear this summer.

Thanks to Patrick Neas for the information.