Dreams that never made reality--"atomic cars" 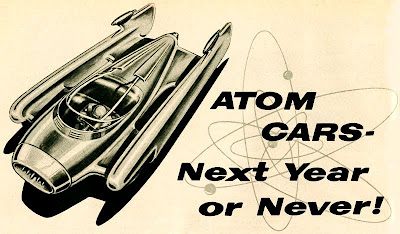 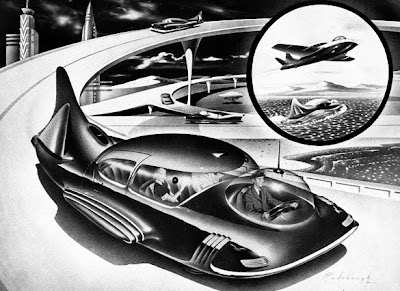 Cool in presentation but the mechanics were missing...

During the 1950s, much of the world was quivering with anticipation over the exciting prospects of nuclear power. Atomic energy promised to churn out clean, safe electricity that would be “too cheap to meter.” It seemed that there was no energy problem too large or too small for the mighty atom to tackle during the glorious and modern Atomic Age.

It was during this honeymoon with nuclear energy– in 1957– that the Ford Motor Company unveiled the most ambitious project in their history: a concept vehicle which had a sleek futuristic look, emitted no harmful vapors, and offered incredible fuel mileage far beyond that of the most efficient cars ever built. This automobile-of-the-future was called the Ford Nucleon, named for its highly unique design feature… a pint-size atomic fission reactor in the trunk.

Ford’s engineers imagined a world in which full-service recharging stations would one day supplant petroleum fuel stations, where depleted reactors could be swapped out for fresh ones lickety-split. The car’s reactor setup was essentially the same as a nuclear submarine’s, but miniaturized for automobile use. It was designed to use uranium fission to heat a steam generator, rapidly converting stored water into high-pressure steam which could then be used to drive a set of turbines. One steam turbine would provide the torque to propel the car while another would drive an electrical generator. Steam would then be condensed back into water in a cooling loop, and sent back to the steam generator to be reused. Such a closed system would allow the reactor to produce power as long as fissile material remained.

Using this system, designers anticipated that a typical Nucleon would travel about 5,000 miles per charge. Because the powerplant was an interchangeable component, owners would have the freedom to select a reactor configuration based on their personal needs, ranging anywhere from a souped-up uranium guzzler to a low-torque, high-mileage version. And without the noisy internal combustion and exhaust of conventional cars, the Nucleon would be relatively quiet, emitting little more than a turbine whine.

The vehicle’s aerodynamic styling, one-piece windshield, and dual tail fins (which are absent in some photographs) are reminiscent of spacecraft from 1950s-era science fiction, but some aspects of the Nucleon’s unique design were more utilitarian. For instance, its passenger area was situated quite close to the front of the chassis, extending beyond the front axle. This arrangement was meant to distance the passengers from the atomic pile in the rear, and to provide maximum axle support to the heavy equipment and its attendant shielding. Another practical design aspect was the addition of air intakes at the leading edge of the roof and at the base of the roof supports, apparently to be used as part of the reactor’s cooling system.

Ford’s nuclear automobile embodied the naive optimism of the era. Most people were ignorant of the dangers of the atomic contraption, as well as the risk that every minor fender-bender had the potential to become a radioactive disaster. In fact, the Nucleon concept was often received with great enthusiasm. Some sources even claim that the US government sponsored Ford’s atomic car research program.

The Nucleon’s silent, sleek, and efficient design was poised to secure its place in the American lifestyle of the future. It seemed inevitable that the internal combustion engine would fade into obscurity, becoming a quaint relic of a pre-atomic past. But the Nucleon’s design hinged on the assumption that smaller nuclear reactors would soon be developed, as well as lighter shielding materials. When those innovations failed to appear, the project was scrapped due to conspicuous impracticality; the bulky apparatus and heavy lead shielding didn’t allow for a safe and efficient car-sized package. Moreover, as the general public became increasingly aware of the dangers of atomic energy and the problem of nuclear waste, the thought of radioactive atomobiles zipping around town lost much of its appeal. Atoms had broken their promise; the honeymoon was over.

Ford never produced a working prototype, nevertheless the Nucleon remains an icon of the Atomic Age. In spite of the Nucleon’s flaws, its designers deserve a nod for their slapdash ingenuity. Their reckless optimism demonstrates that one shouldn’t consider a task impossible just because nobody has tried it yet– some ideas need to be debunked on their own merit. With today’s looming energy crisis and slow migration to alternative fuel sources, we may not have seen the last of the atomic automobile concept. A safe atomic vehicle may not be entirely beyond our reach, as the US Navy has demonstrated with its perfect record of nuclear safety. Perhaps one day fossil fuels will wither under the radioactive glare of the mighty atom, and our highways will hum with the steam turbines of mobile Chernobyls. It could be a real blast.

The Ford Nucleon was a scale model concept car developed by Ford Motor Company in 1958 as a design on how a nuclear-powered car might look. The design did not include an internal-combustion engine, rather, the vehicle was to be powered by a small nuclear reactor in the rear of the vehicle, based on the assumption that this would one day be possible based on shrinking sizes. The car was to use a steam engine powered by uranium fission similar to how nuclear submarines work. 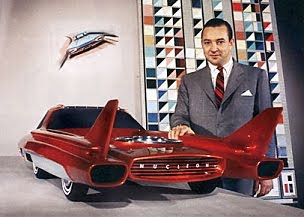 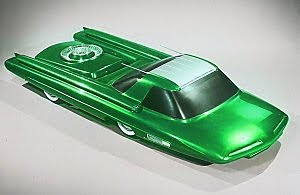 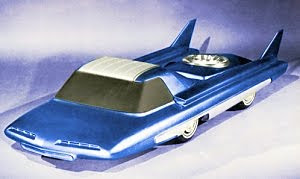 The Nucleon, a 3/8-scale model, provided a glimpse into the atomic-powered future. Designed on the assumption that the present bulkiness and weight of nuclear reactors and attendant shielding would some day be reduced, the Nucleon was intended to probe possible design influence of atomic power in automobiles.

The model featured a power capsule suspended between twin booms at the rear. The capsule, which would contain a radioactive core for motive power, would be easily interchangeable at the driver's option, according to performance needs and the distance to be traveled.

The drive train would be part of the power package, and electronic torque converters might take the place of the drive-train used at the time. Cars like the Nucleon might be able to travel 5,000 miles or more, depending on the size of the core, without recharging. At that time, they would be taken to a charging station, which research designers envisioned as largely replacing gas stations.

The passenger compartment of the Nucleon featured a one-piece, pillar-less windshield and compound rear window, and was topped by a cantilever roof. There were air intakes at the leading edge of the roof and at the base of its supports.

Cars such as the Nucleon illustrate the extent to which research into the future was conducted at Ford, and demonstrate the designer's unwillingness to admit that a thing cannot be done simply because it has not been done.