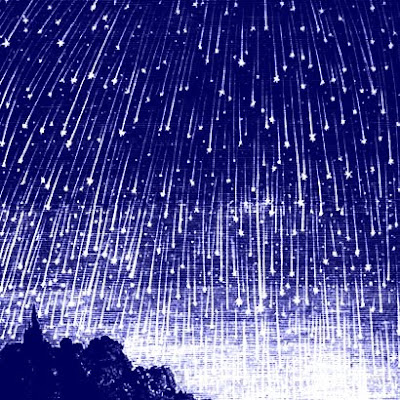 The Perseid meteor shower of 2011 peaks in the early hours of Saturday morning, U.S. time. It's not hard to watch, and it can be quiet fun, but you do have to give up some sleep, and patience helps.

Here, we hope, are some useful tips:

Where to look? The whole sky, actually. The shooting stars, created as tiny comet fragments enter and burn up in the atmosphere, will seem to come from the constellation Perseus, in the northeastern sky. But they may appear anywhere as quick streaks.

Where not to look? Don't look at the moon -- or anything else bright. You want your eyes to get really, really used to the dark. Tonight's full moon will cut down the number of meteors you're likely to see (on a moonless night, you might have seen 50 to 60 per hour), but by dawn the moon will be low in the western sky. Best to look east.

Where should I go? Any place will do, but darker is better, with a nice expanse of open sky. Get away from city lights if you can.

When to watch? Meteor showers are best after midnight, since the morning side of Earth is the one that faces forward as we circle the sun. But because of that inconvenient full moon this year, it's best to try the hour or two before dawn. If you try earlier, the moon will be high in the sky and wash out everything else.

Special equipment needed: None. Just your eyes. You may enjoy lying back in a lawn chair or a sleeping bag.

Can I take pictures? Sure. It may be fun. You need a camera with manual settings, though, and a tripod is a must. Set your lens to the widest possible setting. Set the ISO (sensitivity to light) to a high number, such as 400 or 1600. And -- this is critical -- your exposures need to be l-o-n-g. Experiment. An exposure of 5 to 10 minutes may give you a field of stars with a couple of streaks across it. Or you may try for an hour (close down the f/stop) and get very little.

What if it's cloudy? You're out of luck. Get a good night's sleep.